''Raflifu is the lord of the earth and the depths of the sea. He is a guardian of great knowledge who resides within the Tunnels of Set– i.e. the pathways between the ten primary spheres of the Qliphoth. Knives and staves are sacred to him. Raflifu is a healer, a protector, and a pyschopomp who rules shielding, banishing, exorcism, warding, the blocking of curses, and defense against psychic attacks. He can help the magickian develop natural defenses against psychic attacks and vampyrism as well as help her cross the abyss.

Raflifu is the lord of the crossroads and the archdemonic divinity of the fire of the abyss. He can greatly strengthen astral sight and personal magnetism, and he is an excellent tutor and guide in Qliphothic alchemy, glamour magick, the unfolding of new powers/ablities, astrology, homicide, blood sacrifice, sanguine vampyrism, skyring, death magick, and some stellar magick. He can impart stealth and interpersonal charisma to the witch. Michael W. Ford succintly refers to Raflifu as a vampyre in his book Sekhem Apep, which perfectly corresponds to my gnosis (note: precisely zero traditional demonographical treatises discussing Raflifu ever refer to him as a vampyre aside from Ford’s and my own, and I had yet to peruse Sekhem Apep when I communed with Raflifu).

Raflifu can teach the witch to shapeshift her astral double into a dragon, a lion, or an owl. The graveyard and crossroads are excellent places for rites to him. He specializes in cleansing and divination by fire, developing alchemical gold, monetary pursuits, and the enchantment and consecration of crystal balls. He can cause a target to incur sickness and atrophy. If you collect insects in a jar and offer them to him via burning, he will engender arson at your disposal.

According to Liber Obsidian Obscura by Alexander Winfield Dray, Raflifu rules the “Sorcery of the Unfiltered Self,” which Dray defines as “Methods of Accessing the Shadow Self without interference from filters, working with Pure Expression of Will, etc” in his grimoire.

Raflifu can initiate the witch into what is called Atlantean magick– i.e. magick using a primal current of energy. Regardless of the moniker, Atlantean magick in no way implies or requires the literal existence of the mythical island of Atlantis. Raflifu can engender destruction via fire magick and create thoughtforms which protect and/or heal specified persons.

Raflifu imparts the strength necessary for quiescence– vocal silence, stillness of body, and mindfulness/being present. He can enchant an automobile to prevent its being pulled over and to become concealed during a car chase or prior to being towed. He governs happenings regarding the government and affords the witch the opportunity to rule a new world. He governs one’s sense of space and time as well as the power of memory– ruling both the preservation of memories and the forgetting of the past.

Raflifu appeared to me in a form comparable to a genie from a Disney movie, albeit with completely red skin (if you can call it skin). He had completely black eyes and dark, greyish-brownish horns. I had difficulty discerning his gender, and apparently Frater 414 did as well. He kinda maybe possibly looked male-ish (I think) (I suppose) (I don’t know), but fuck it, I’m using male pronouns for convenience (even though I used the pronoun “hir” in my notes during communion with the the spirit).

Raflifu is the archdemon of the tunnel between the Qliphothic spheres known as Samael (Mercury/Adramelech) and Gamaliel (Black Moon/Lilith), in which tunnel dwell Will-o-wisps. His name means “the Great Haggler” and he is often paired with Gargophias.

Cort Williams describes the tunnel in Qliphothic Wor(L)ds as follows:

If Shalicu is the communication of Mericurial lore in a sudden instance of catastrophic illumination, then Raflifu is its communication in a more constant and gentle manner. If the former can be likened to the impact of the impact of a meteor, which engulfs the old Aeon in an apocalyptic fire in the course of inaugurating a new Aeon, than the latter an be likened to the light of the sun-A constant transmission of gnosis unto the world via the intermediary of the reflecting mirror of his mate the moon, the outpouring of the elixir of knowledge into the chalice of his bride Lilith that it might then be broadcast unto the world via the medium of the oneiric realm.’’ 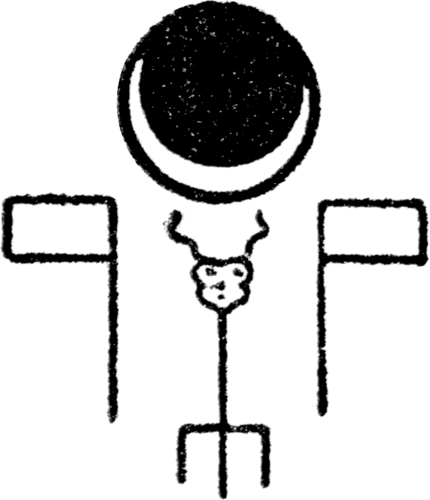 This is his sigil.

Experiences with him highly appreciated!

Can you go more into detail on him emparting stealth? Or have you covered what you know of that?

I only have this from VK Jehannum.