So a few years back before I started practicing magic, I had received a brief vision of a being with a deer skull for a head, long antlers, wild red hair, no eyes, a muscular male torso, digitgrade legs and clawed feet. I sensed it was a male and that he had intense sexual energies about him. At that time, I had no idea how to contact spirits (I had only just awakened to my mediumship at the time), so I tried looking him up, but found no information that aligned with my description.

Skip to recently, he’s suddenly back in my mind again, only this time more than a vision. I have felt his presence around me. This time I reached out to him through telepathy. I asked him his name, and he essentially told me to figure it out for myself. The closest results I’ve gotten to my search were god spirits like Pan and the Horned God, and demons like Baphomet. But none of them seem to be the right answer.

So I’m asking you: have any of you encountered a spirit like this? If so, do you know the names of spirits that would take forms like this?

Further information: he’s not malicious (or at least, he hasn’t given me any reason to doubt his intentions), very sexual but also courteous, the air is rather cold when he’s near (or maybe that’s just this house he’s staying in) and he has a low, smooth voice. 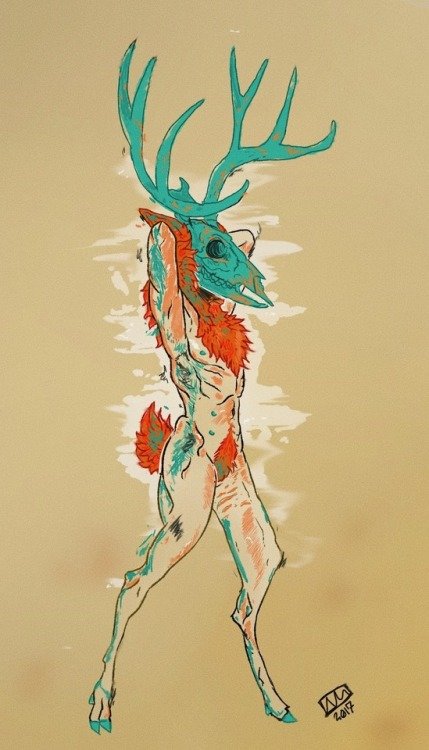 I don’t know it’s name…but it reminds me of the native american spirits, or Norse because of the red hair.

Now that you mention it, yeah, he could be of Norse or Native American origin.

I’ve seen him as well.

Really? Where? Did he give you any hints of who he might be?

Looks very much like a Shaman in it’s true Astral form to me.
I think you’re noticing another Sorcerer there.

@Prophet I get the sense you should work with native spirits… like Daoism, Norse, and other shaman traditions. I feel that if you go about it like that… you can connect with the nature world, and reap from it… when spirits come to you, it’s usually an aspect of yourself… calling back to yourself… like reconnecting with a part of your being you really want to know.

I’ve never encountered this but the energy coming off that pic is intense.

Where should I start with those?

Look into nature, or weather magic from the Daoist tradition… Jerry Alan Johnson has some great daoist shamanism books… very informative but very expensive…
I’d start with an alter to nature spirits, and that deer spirit you’re seeing. I have used an alter in the wood too many times… you should look into things like medicine wheels. I think some reading on shamanism would be a great way to set it off…
All you really need is an:
Alter (can be just the dirt in the ground)
Fire (candles, or a pit of wood[brownie points if you know your “sweet” lumber])
Wand/sword/stick or just fingers (to draw into the ground)
Stones (if you plan on doing a medicine wheel [try using your environment])
Bowl (for water, and/or offerings) [personally, I just put it in the ground and leave it for nature… organic ingredients, so it’s more in tune with natural processes…

This is one of those rituals where you’ll need to immerse yourself in knowledge, think, and feel what will be needed for this process. Let your intuition guide you. Let me know how you do… I’ll like to hear your experiences if it’s not too personal.