I decided to separate this study into a separate topic so as not to confuse it with the rest of the experience that I describe in my main topic. Perhaps this will develop into a more extensive work with Indian deities, since I had, albeit a small, experience of meeting and working with them.

But for now, this is in perspective. My main goal is to study a ancient deity of the Indo-Iranian or Aryan pantheon Trita Aptya. I want to confirm or refute my hypothesis that Attakeria acted in the role of this deity for a certain time.

I will alternately meditate and contact a number of deities, namely Agni, Vayu, Indra and Surya, in order to try to learn from them about this deity and, in particular, his connection with Attakeria. My choice of these deities is determined by the one of the scientific hypothesis that Trita Aptya belongs to the family of light gods.

I will also try to contact Trita Aptya himself, although the first two experiments showed that I see only empty space, light figures (I will call them “light guides”) and a number of objects that may have a symbolic meaning (mask, spear, shield, armor).

Confidence in conducting this experience gives me scans @lordlight123 and @MagickVigilante (once again, a special thanks to you for that!). Also, a former forum member pointed out that Attakeria has a connection with the god Agni. The nature of this relationship remains to be seen.

On this, perhaps, I end.

Today I conducted the first meditation related to the fire deity of the Indian pantheon Agni. Concentrating on his “classical” image and repeating his name, after a while I saw myself in a stone hall, very reminiscent of a temple hall. All around was empty and half dark. Opposite me was a huge stone bowl. Suddenly Agni appeared right in this bowl.

Agni wore bright red and gold robes. His skin was slightly reddish. In his hands he held a book (Vedas?), Which he carefully studied. I greeted him, but did not ask the questions about Trita Aptya at the first meeting. I wanted to initially feel the atmosphere and energy of the deity, and then proceed to the questions.

I very clearly felt the nobility and dignity emanating from Agni. In addition, there was a feeling that he knows Attakeria very well, but this is not a «family» connection, but rather a “working” one.

This ended the meditation. I am enclosing a small sketch of Agni. 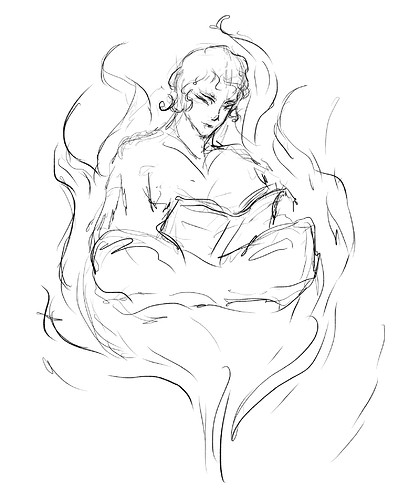 In another curious book on archeology and linguistics, it is indicated that Trita Aptya is the oldest image of a thunderer widespread among Indo-European peoples, fighting against serpentine demons, a defender from the invasion of forces from the other world.

There are also analogies of Trita Aptiya in Zoroastrianism (and here I recall King Paimon’s hints about “closeness” to Zoroastrianism). This is the third person who prepared Haoma (Soma in Hinduism), or is the first doctor-healer who received 10,000 healing herbs from Aguramazda, or the hero of Iranian mythology Traetaon.

In any case, the image of Trita Aptya left certain traces in the culture and mythological systems of Hinduism and Zoroastrianism.

It is possible that they may have aspects related to Indian or rather Indo-European mythology. As far as I understand, now his brothers are not particularly involved, let’s say, in earthly issues. Or it could be, for example, a variant of a very ancient gnosis depicted in a modified form in the legend.

But, it seems to me that they could also appear in the form of spirits or deities at the same time when the mythological systems of Hinduism and Zoroastrianism were taking shape. But then there is the same difficult question of their identification as with Attakeria. It seems to me a real luck that I found information about Trita Aptya. There is most likely no information about Trita, Dvita and Ekata in general.

Today I tried to ivocation Trita Aptya. I began to meditate, repeating his name, since I did not find an image of this deity anywhere. After a few minutes, I felt a surge of energy that went through my body. Then I felt warmth and suddenly, near the top of my head, I very clearly felt a huge consciousness, so large that my human consciousness could not place it in itself. At the same time, the words rang out in my thoughts: “I am Ati (short for Attakeria), I am Aptya, I am Ignis Draco.”

Then I asked to show the image of Trita Aptya. I saw:

After this meditation, the feeling of elation and joy does not leave me, as it happens after meditations on the sigil of Attakeria.

Quite recently, I suddenly had a dream about Indra. In a dream, he was a black-haired, massive man with whom I somehow seemed to be fighting. After this dream, I decided to try and communicate with him.

So I started meditating on the image of Indra and chanting his name. In front of me appeared an image of a large royal hall and Indra himself who was reclining. He was relaxed and seemed to be taking a break from business. He met me indifferently, but agreed to talk a little, since I was interested in his connection with Attakeria.

As he noted, he knows Attakeria, but did not interact with him very much. He pointed out that Attakeria worked more with Vishnu (!), And the imposition of the functions of Trita Aptya on him was simply due to the human factor. Indra and Trita never had any struggle for primacy.

It was a really short talk, but I plan to talk to him about that again.

The more I try to study the history of Trita Aptya, the more I am convinced that it is associated with the Indo-European snake-fighting myth. Perhaps I repeat myself, but after working with the sigil of Trita, I seem to get small insights that make the previously unnoticed facts obvious.

For example, I once mentioned that one of the practitioners on this forum said that he saw Attakeria and some other spirits fighting a dragon or a serpent. That this happened a long time ago and the serpent / dragon was defeated by Attakeria. This led me to think about the struggle between Trita Aptya and the serpent Vritra.

One of the hymns of the Rig Veda states that Trita defeated the “six-eyed, three-headed” opponent. The Avesta attributes the victory over the “six-eyed, three-headed” serpent Azhi Dahaka to the Iranian hero Traetaone. The names Trita and Traetaona mean “Third.” In addition, the Indo-Aryan Trita is called Aptya (“Water”), and the Iranian Traetaona is called the son of Atvia (“Water”).

Thus, Attakeria’s fight with the serpent / dragon is very similar to the fight between Trita Aptya and Vritra.

But, I will note that this is only one hypostasis of Trita - a warrior. I vaguely sense that she carries tremendous energy - active, belligerent, furious - and therefore I’m not quite ready to work with her yet. However, other aspects of Trita, in my opinion, are more peaceful and are associated with water, rain and, as a result, with the sky.

Continue my research of Trita Aptya through the Rigveda. So Rigveda says:

“When the mighty Maruts rushing and the lightning flashes, Trita thunders and the waters rustle. The light path of the Maruts shines when Trita appears. One of the hymns tells that the winds found Tritu and asked him for help. The flame of Agni rises when Trita, like a smelter of metals, blows on him in the heavens and sharpens him in a melting furnace. "

What follows from this? In my opinion, there can be traced the connection between Trita Aptya both with light and with fire. But this fire is of a different order, since here there is a demarcation of the functional of Agni and Trita. Perhaps that is why their connection can and is only of a working order, since, according to this mention, Trita “helps” or “works” with the flame of Agni.

No less curious is the connection with the Maruts, who are also the deities of storm, wind, thunder and lightning. In the fight against Vritra, they act as assistants to Trita and Indra. I think there is also a “working” connection with these deities.

I think that in the near future I will try again to communicate with Agni, Indra and try to establish a connection with the Maruts.

Recently, when trying to work with Trita Aptya, I began to increasingly see the silvery figures that I originally saw on the heavenly staircase. Today I tried to find out what these figures are.

Attakeria told me that these are spiritual guides or messengers between the heavenly sphere and the earth. It is noteworthy that very light and pleasant vibrations emanate from them, and their appearance is silvery-white (at first they look like clouds, but if you look closely, you can distinguish male or female facial features).

I wonder where Trita got the helpers from? Did he create them himself and for what purpose? Since now these silvery figures seem to be silently awaiting either some order or a task.