Triple ravens on my path

Went to do laundry again before work and a large raven as big as a Boston Terrier purposely got my attention to show me there were 3 of them.

I don’t believe in ravens as bad omens so any thoughts on this?

Ravens to me are associated with Belial. Anything going on with you at work lately?

Ravens are associated with: Morrigan, Odin, Loki (depending on who you talk to), Macha, Babd, Nemain, Hekate, Cerridwen, and much more.

Although the fact you see three makes me think of Morrigan, because of the laundry and the washer at the ford.

Been seeing a lot with the number 3 and 7 for a while now. I jumped back into witchcraft/shaminism about 3 -4 weeks ago, tried a spirit guide meditation the other day and nothing showed up but I know it takes time. Last night Before calling out to King Paimon I called out to Belial. I genuinely admitted to him I’m lost in my life and he knows the pain Im in. I admitted laziness on my part and that Im afraid of failing my sons and myself fuck everybody else. It’s hard for me to keep the flow going and I need help to break this and find my strength again and power through to success so please give me help or guidance. Its funny you bring up Morrigan cause that names been popping up alot yet I know nothing of her. Also, some crazy shit Ive been having some serious intense visuals of passionately making love with Hekate. The thing is Im not causing the thoughts and trying hard to block them out of respect for her but when they happen theres nothing that I can do to stop them like I have no other choice but to let it play through. In the visualizations SHE is the one innitiating sex like literally grabbing me up and fucking the hell out of me. The other day at work she popped into my head riding me while drenching herself in a wine and blood mix and had me drink and suck it off her during sex. Yeah thats my type of shit but again im not causing the thoughts for fear of backlash on her part lol

Ravens symbolise the magic of consciousness

My favorite bird. This morning one was on a branch greeting me while the other flew over the house.

I had an experience where I met a man whose nickname was Odin, followed by two ravens landing on his car while he talked to me, when the man left the ravens literally followed his car on either side. After a while a bunch of ravens started landing by me.

Ravens can be seen as messengers and spiritual teachers so to speak, I later on found I have strong ties to the norse through these ravens.

Ravens are my favorite bird followed by crows and owls. Found out today the raven is my native american totem animal which is pretty cool. The Morrigan, is she genuinely her own entity or aspect of another?

Simply could be something was dead nearby. They are carrion birds, you know. Not everything has to be a sign or an omen.

Been seeing a lot of deer, wolves and foxes lately. However, I live in Wisconsin. Go figure.

No death I’d have felt and smelled it. Since I was born me and death are VERY close “friends”. Tricky relationship…

Morrigan, is she genuinely her own entity or aspect of another?

She is her own thing.

Then it is definitely her.

Last night around 3-4am I decided to call out to Morrigan and see what’s up. Did a satanic banishing ritual, used this symbol in my blood, face north calling on her and said what I had to say while down on one knee out of respect I didn’t call her to work with her but if she can give me answers to certain things. I felt ice cold energy inside me and my insides twisted like something was ripping me from the inside out to the point I almost puked. I held my ground and delt with it until it finished and felt a warmth cover me. But like everyone I’ve called on so far if she had anything to say I still can’t hear so I said thank you for hearing me and passed out. Woke up this morning and the blood sigil is gone. I Searched everywhere and it vanished out of my notepad. Idkwtf the deal is with that that’s never happened before. Also, just realized a brand new bag of Palo Santo sticks disappeared too…weird. 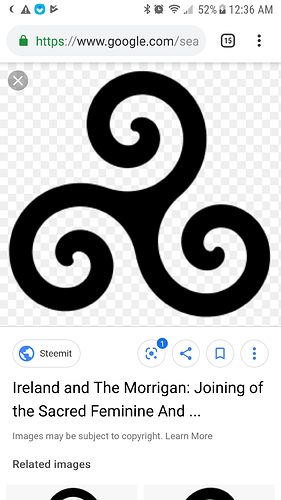 Ravens are very intelligent animals (and know they should be wary of some humans); maybe he/she was just testing you out?

If you want to befriend them, they like shiny objects.