So I have screen shot a message to a forum member whom I will not name…but the whole message is mine to them so it shouldn’t matter. I only screen shot everything because I’m too damn lazy to retype everything.

This is what’s been going on in my crazy life for a year now and some very recent stuff. And explains the eggs alot more. Though still have stuff to add.
I 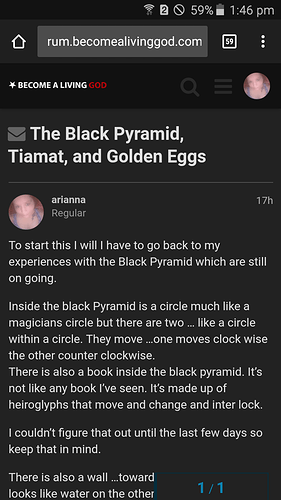 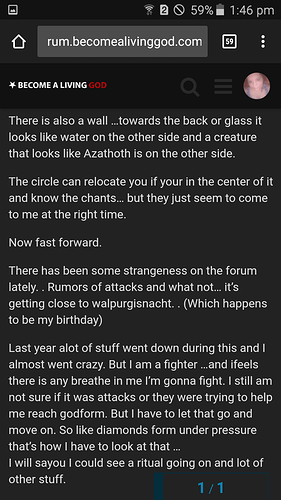 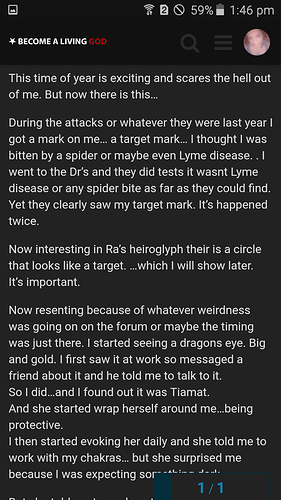 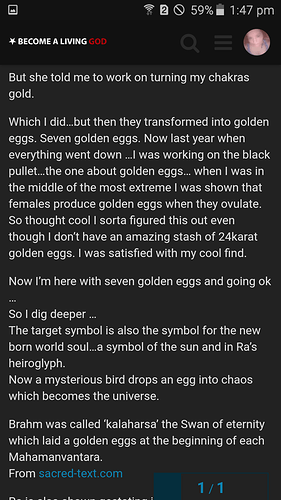 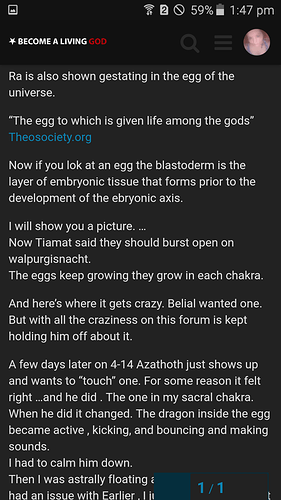 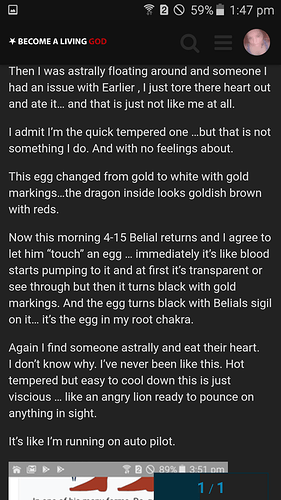 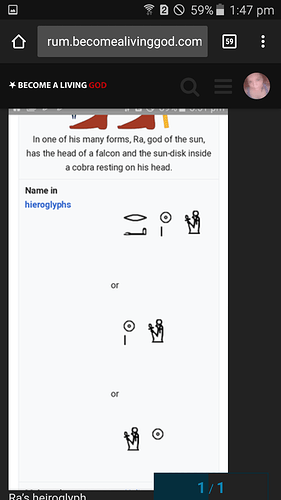 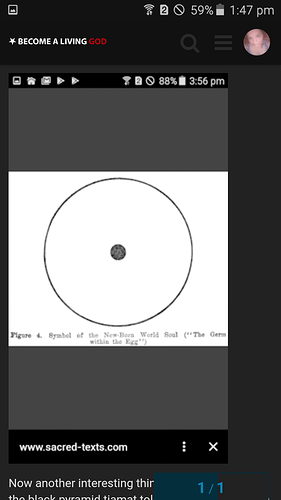 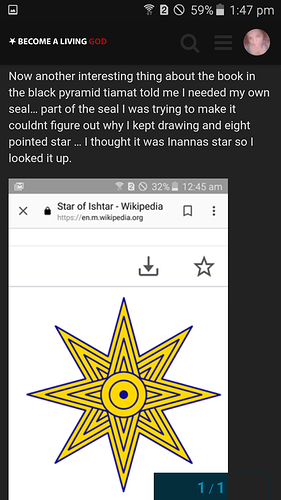 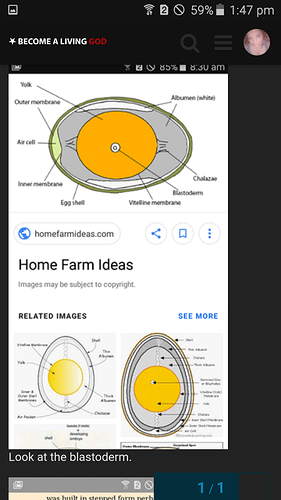 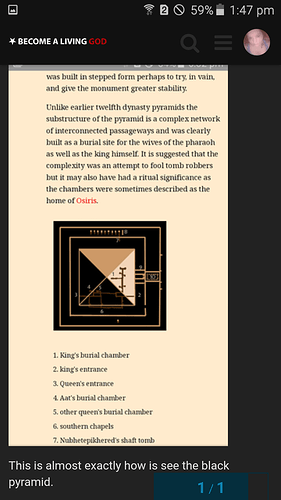 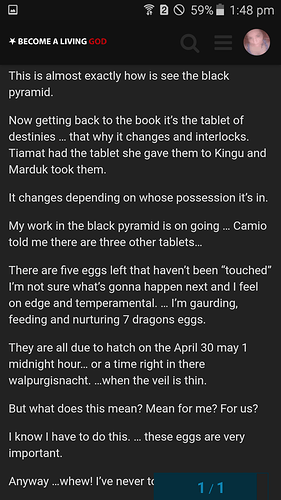 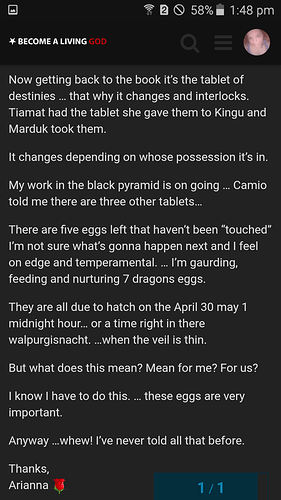 Azazel came this morning and “touched” the egg in my heart chakra.

It immediately had a burst of emerald green color and then …blood started pumping to it .

The embryo turned red with black markings and the shell turned black with Azazels sigil in red.

This dragon can fly …he will fly very well.

After that Belial appeared and Belial and Azazel seemed to almost have words …Belial seems overly concorned about my protection. And Azazel took the stance he’s always been protective. …when I pointed out that Azathoth has an egg he marked too and he isn’t going off…Belial told me that that was just Azathoths way he comes does what he needs to and leaves …

Where as Belial wants to be a dominant role in the eggs formation hatching and growth.

There are four more eggs… not sure what will happen next.

Belial has also left a familiar/ messenger with me.

This is important. Every year at this time I go through a major change. When I was younger it would break me. I’ve just never seen the correlation till now. Looking back at major life events, yea it’s there. My birthday is in late March so there’s that, but I think it’s Walpurgisnacht. I have been feeling something building this year, something I need to be ready for. Dragons have been in the forefront for me too. Draconic entities rather. Anyway, would you mind if I ask Tiamat what she’s doing and why this is happening, for my own curiosity, since it’s about you.

The synchronicity on your posts is always amazing. I can’t wait to read more.

I couldn’t help but notice that the circle in Ra’s hieroglyph looks a lot like the symbol for the Monad and John Dee’s Monas Hieroglyphica. Interestingly, it also represents the sephira Tiphareth (Beauty) in Kabbalism, which is also associated with the sun and Ra.

I wonder if this all has to do with something more than just dragon eggs… The synchronicity is just too blatant to be mere coincidence.

Someone walked by me at work that I don’t really like and little Azathoth was trying to extend tentacles. .to reach him.

So I now have to be careful of what think. Because he isn’t even hatched yet and trying to do stuff.
I don’t hate the guy btw it’s just not a coworker I really like.

The Azathoth egg, He looks like a dragon but has tentacles on his belly.

The next dragon will be White.

I know… his gonna be the one I have to keep both eyes on.

I know Azazels is a flyer …I had that vision of him flying… Azazels also feels firey. .

Belials has wings …but he feels more earthy …grounded…Maybe because he was the root chakra.

The Old Ones shall rise again and they need new bodies, new vessels for this new age. Not just Old Ones as in Cthulhu and what not but all the old beings that were once worshiped many no doubt don’t even have names anymore. Wouldn’t be surprised if the more modern incarnations of these beings like the Goetic spirits seem to die and vanish only to be replaced by their new forms. After all reincarnation is not limited to these fleshy planes but well everything is just an infinite reflection. Within, without, above and below.
Also probably making no sense because sleep deprivation.

But @Dinmiatus, brought up a good point that sense the egg is in a chakra he maybe be picking up potential threats to himself through my energy fluxes …so if my emotions change …he is picking up on it and if it feels negative he is sensing it as a threat. And picking up on my thoughts he could lash out at whomever angers me as a precieved threat

Is that how you said it or close @Dinmiatus?

Azazel’s would be a fire breather imo

Amaymon has the dragon egg in my solar phlexus hes egg stayed gold and the dragon has less of a medieval type look. …he looks serpentine. …with wings… he is gold and looks
Almost just like this. 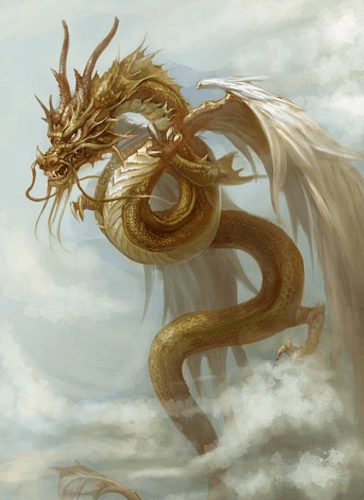 I meant to put this here

Azathoths message when I evoked him last night. The time has come for the old ones to return. My egg, it’s hatching it’s combination of Tiamat and myself is the best way. You are the key remember? You bring things forth. This is you opening the gate and allowing us through. Remember your vision last year when you saw the “spaceship” , but realized it was an embryo in the womb.? You dear one, are the way in. Beautiful mother. Why do you think the goetia love you so? You are the pure one…

Reading that gave me an image. I once saw Lucifer with a ring of keys. They keys unlock peoples gifts. I saw him take a key and unlock my heart. If you’ve heard of they “serpents key” or the "key(s) of Lucifer. The gift is like the lock. It is sturdy and can be hard to break. Like a gift a person doesn’t use its still there collecting dust and getting rusty. you just need the right key to open it.

I felt it was important to say that gates are not always portals for spirits to come through. If your true identity is that of a key there may be more types of things than you think you can unlock.