Wicca was my stepping stone into the occult, so I see it fondly.

Wicca was my stepping stone into the occult, so I see it fondly.

Mine was a Black magician and a Wiccan lol.

They clash quite abit haha.

Wicca is a gateway drug but you can’t progress very far at all. Most wiccans eventually move into something more powerful or start deluding themselves. Wicca is Christianized Paganism with better morals and it’s a trap into weakness.

[quote=“KingOfHearts616, post:1, topic:14796, full:true”]Another part of it I blame on the wiccans I encountered having their heads stuck so far up their asses that they only hear themselves.
[/quote]

Yeah that’s my experience with em too. I once asked one for some advice on how to scry, and she refused to share any knowledge with me because she didn’t think I should be able to scry for the benefit of myself…as if I couldn’t find the knowledge I needed elsewhere

I started with Wicca about 20 years ago, I think I’ll always be fond of Stewart farrar. I don’t so much have a problem with the traditional Wicca as much as the neo Wicca that’s been hijacked by the new age movement that I can’t stand. new age ideologies and ultra liberal politics.

Wicca was my stepping stone into the occult, so I see it fondly

I prefer the solitary workers but the covens aren’t so bad. Some focus too much on politics for my taste.

Wicca actually teaches you a lot about low magick and using things around you for spellcraft but like @FraterMagni it’s a stepping stone to greater things.

Not to mention the moment you crave more, and by more I mean more power, then you’ll start to be treated differently. Not in all cases but in most. They’ll tell you to be okay with aspecting the goddess alone and that you can’t really go any higher than that ( trust me I’ve been down that road)

Again, it’s just like every large organized group out there. There are cool wiccans who are really creative and don’t mind dabbling into the darker aspects of their craft and there are fluff bunnies who frown at love spells and shy away from bindings and only work with the whit light aspect of diana.

Don’t judge it too harshly, it’s not bad, it’s just not for everyone.

And I agree it has nothing to do with titles. But in order to ascend, one shouldn’t fear using your own power or the powers that be.

True. And for that reason there are some people that can hit the mark through their personal Wiccan practices. It really is a matter of perspective. I think there are a lot of broad generalizations regarding Wicca because of piss poor research and sensationalism/popularization of the path in modern times. From what I have seen from my interactions with individual Wiccans there is quite a bit of room for interpretation regarding most aspects of the preconceptions concerning the subject.

I was curious as to everyone’s thoughts.

All that being said, I have an ongoing debate with a dear friend of mine who is in the US Army. She also believes in the Rede regarding doing no undue harm to people. My question to her is “will you follow an order to harm if you know for a fact it is murder beforehand?” I.e, being ordered to shell a position full of children, or targeting a drone strike right near a building full of sleeping families in a country that never posed any threat to us in the first place. I.e. Iraq or Syria. So far I have gotten the same bullshit, low-energy answers I get from Christians on that one.

I just wanted to ask what everyone’s thoughts on the Wiccans and the practice of Wicca.

Whatever works for them, also never forget that the fluffier lighter side that resembles Xianity provides great cover insofar as people hear the message over and over not to FEAR those who work magick, when for centuries the message was that all magick was malevolent, and those who do it should be executed.

They provide cover due to their numbers, the wide appeal means it attracts many followers and this gives a great market for the same kinds of goods and services we use, imagine trying to openly buy an athame, pentagram altar cloth, Tarot deck, or other weird magickal gear in 1632, or 1859!

So from my POV they get the thumbs up for their propaganda value and act as a great gateway for those who want to go deeper, whilst keeping those who don’t, those who basically want to follow a morality-based religion, still firmly on our side of the “I do magick and therefore won’t support witch-hunts” line.

I’m a little shaky on the jargon definition of Wiccan? I thought it was just witchcraft? How does it differ from LHP?

In most cases it refers to the actual religion, though some people use it interchangably to mean “witch” or general user/believer in magick.

Wicca (English: /ˈwɪkə/), also termed Pagan Witchcraft, is a contemporary Pagan new religious movement. It was developed in England during the first half of the 20th century and was introduced to the public in 1954 by Gerald Gardner, a retired British civil servant. Wicca draws upon a diverse set of ancient pagan and 20th-century hermetic motifs for its theological structure and ritual practices. Wicca has no central authority. Its traditional core beliefs, principles and practices were originall...

Well, having come into this discussion with a biased opinion as I said, you all have shown me the error in such thinking, and I have decided to start dabbling in the wiccan practices as a start as I’m very new to magick. You all did something I didnt know I wanted to happen until it did, so I thank you for it.

Oddly enough I had a bit of a urge to post this topic before I did… Perhaps some of the powers that be trying to help my path.

Either way, I still want others to post their views on this topic.

Wiccan is great ive praticed it for years you learn about energys and vibrations also candles and basic spells for love money and other things the fluffy bunny stuff is for liyot hearted wiccans to me its all the craft if you cast a spell your into magick. But honestly its a great stepping stone from RHP to LHP and inbetween.

I enjoy their tools and formula on magick practices. But not their thinking of “light” and shit

I’ve honestly never ran into a wiccan that I could form a lasting relationship with. it usually devolves into a “witcher then thou” mentality.

Yea i unstand but theres where i started and im summoning demons and making pacts so i guess its where you let it take you. I prefer witch now but whatever

With all due respect, as has been pointed out, Wicca is a religion – a very new one, in fact. What, public unveiling by Gardener and Valiente in 1954? And has little to do with traditional witchcraft. Again, with respect, I wouldn’t consider yet another religion, and one that doesn’t express the “Right Hand Path” (an obtuse moniker) insofar as was known before 1954, as a great stepping stone to the “Left Hand Path” – which in and of itself means nothing as a moniker. There are as many ‘Left Hand Paths’ as there are people to conceptualise and follow them. I appreciate that you find something beneficial to you in Wicca. Unfortunately, so much emphasis is placed upon the trappings of practice (i.e., the material items required for… whatever.) Nevertheless, continue well on your journey.

[quote=“KingOfHearts616, post:34, topic:14796”]
I have decided to start dabbling in the wiccan practices as a start as I’m very new to magick.[/quote]

I believe the emphasis on returning to a singular God and Goddess binary has its roots in the Principle of Gender explained in the Kybalion, which istself summarises and clarifies various older ideas regarding masculine and feminine energies.

Related to that, I recall reading somewhere that the earliest conception of Wicca was based heavily in sex magick, but I’m not sure now where I read that - I am only mentioning it because it’s in contrast to the mainstream conception of Wicca as pretty anemic and dull (people usually seem to associate sex magick with “dark arts” and so on).

… the “Left Hand Path” – which in and of itself means nothing as a moniker.

Two magickal authors have attempted to clarify and define this in recent years:

Become a genius of the Left Hand Path with Timothy. Awaken your will to power with the first complete philosophy of black magick ever written. 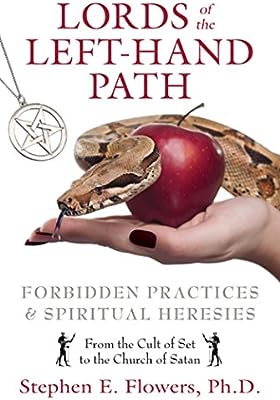 Examines the left-hand path and reveals the masters of the tradition • Explores the practices and beliefs of many left-hand path groups, including the Cult of Set, the Hell-Fire Club, and heretical Su ...

I think that the definition laid out in Stephen Flowers’ book is the one many (but by no means ALL) of the people on this forum tend to aspire towards, rather than formless merger back onto the Source, or a place in heaven.

(I posted about this issue before, here, giving my personal definition and point of view.)

Source: “Lords Of The Left-Hand Path” by Stephen Flowers[/quote]

He covers the entire span from the roots of the term as “Vāmācāra (Sanskrit: वामाचार, Sanskrit pronunciation: [ʋɑːmɑːcɑːrə]) is a Sanskrit term meaning “left-handed attainment” and is synonymous with “Left-Hand Path” or “Left-path” (Sanskrit: Vāmamārga)” (Wikipedia) through to modern-day “Set as isolate consciousness” and self-deification, so this term isn’t taken idly, or from a place of ignorance as to its origins.

Also, under this definition, you don’t have to work with demons, baneful magick, any of that - you can work in a cat sanctuary as a healer and still be LHP, in fact he briefly talks about the number of LHP people who work for the good of animals in that very book.

As for what’s an original meaning, prior to the advent of monotheism, most cultures accepted some degree of godhood to exist for their Kings, at least, they also evidently felt an investment in this for themselves (the Pyramids for example were NOT built by slaves), they all aspired to a good afterlife and/or to live on through their descendents and their reputation, so IMO this isn’t some bizarre modern concept, just the evolution of a very old one.