This is normal, right?

So recently I called upon Leviathan. I used their Sigil and Enn and I felt a presence. Once felt, I asked about whether it was them who had been reaching out to me and they confirmed they had been wanting to help with my emotions. I then asked whether they’d be willing to help with mastering my mind and emotions and some shadow work. They agreed and told me to contact them again in the morning. I think this is where my natural instincts kicked in (because yeah, first time talking to a demon so I was freaking out after a bit) and kind of went “what?”. I had a bit of a moment where I had to calm myself down and get back in the zone to receive a telepathic message and they just repeated “when you wake up”. Was my “mini-distraction” offensive or okay?

They addressed me as “child” and “dear child”. Is this normal? They also told me that I should stop resorting to my pendulum and trust my telepathic abilities.

When I was talking to them it felt cold and then I started sweating. I looked in my mirror and I could see the sweat dripping and feel it down my back. Is this maybe just a reaction to strong demonic presences?

Before anybody mentions parasites, I had a servitor on lookout in case any came through.

They addressed me as “child” and “dear child”. Is this normal?

It seems so for some entities. In new age and lightworker circles the channelers use “dear ones” and these a lot. I’m not sure what they mean by it, but I find it psychologically it puts people who are looking for gurus into an infantile state that is overly accepting and disables critical thinking. It puts me on guard and I move into a mode of looking for information and not a relationship, and I consider that info at least semi suspect as there is seemingly a psychological agenda in the labeling.

You can ask it not to call you that. But it’s an interesting experiment to see if if picks up on your attitude to being called that and adjusts. Doing that also gives you info about it’s mind/emotion reading capabilities.

They also told me that I should stop resorting to my pendulum and trust my telepathic abilities.

Using the pendulum IS using your telepathic abilities, so this makes no sense. Unless it means work on other clairs more…? But exercises subconscious communication in any way is helpful… Maybe ask it for more detail.

When I was talking to them it felt cold and then I started sweating. Is this maybe just a reaction to strong demonic presences?

Sounds like stress. Leviathan is said to have a very intimidating and predatory presence, and even if you don’t consciously react your human body can still do so at the base level of the amygdala or reptilian parts of our brains, which is before thinking happens in the higher brain.

Depends on the person and the entity, not all elicit the same reactions.

Using the pendulum IS using your telepathic abilities, so this makes no sense.

This is just the way I translated it. When I said that I meant using my mind only - so just communicating with them in my head. It’s something I’ve been doing with my spirit guide lately. I interpreted it as “you should trust yourself more” instead of always seeking answers in a pendulum. I used a pendulum to get basic answers such as “did you reach out?” etc etc and then as it went on they told me that I “did not need” to use it.

I thought it could’ve perhaps been some sort of fear. I didn’t feel stress/fear until they told me to contact them in the morning. It might’ve been a base reaction since it’s the first time I’ve ever done it. I’ve never had a reaction like this with any other entity though, even when I have been a little apprehensive.

I’ve begun to sweat during invocation before, but think it was more the process then the entity that caused it. However, I have felt simultaneously cold air with a radiating warmth when in the presence of others, as well as the corresponding vibrations that usually accompany for me. I’ve only contacted a few and have yet to call upon Leviathan except in arranging the circle, so not sure what their presence feels like, but meeting with what I believe was Lilith in dream was a very powerful feeling.

Kinda jealous you can hear them. I am still at the inner monologue or something else state. I would agree with still using pendulum as it has always been invaluable to me, but maybe like me, you can also alternate between sessions of just listening in the void to see if you can parse anything out or enhance your ability. Good luck to ya

Yeah, I often use it to confirm things. I think what I was being told was that I didn’t need to completely rely on it. Especially since I was asking for help mastering my mind maybe?

inner monologue or something else state

What do you mean by this?

My mind kinda constantly rambles. I have gotten to the point in meditation that I can shut it down to silence, but then if I hear my mind say something I don’t know yet if it’s another or my monologue kicking back in. I have had a few instances very recent (or it’s very new to me) where a song or thought pops into my mind randomly that stops me for a sec and makes me think on what it was (yesterday was a good example lol), but as for hearing entities, it’s only been random whispers and dream vibes so far.

You can ask it not to call you that. But it’s an interesting experiment to see if if picks up on your attitude to being called that and adjusts. Doing that also gives you info about it’s mind/emotion reading capabilities.

This is very clever @Mulberry

I determined on my own experimenting with this concept most of the infernals I work with and basically all the 72 are highly telepathic.

This can be uncomfortable when the spirit seems to have information advantage. It can put the magician on his/her back foot in an interaction and make them seem bigger than they really are.

They can read us like a book usually it appears. Ive read there are methods that can shield your mind from this but that’s for another topic.

I think what helped me is asking the spirit to confirm whether what I heard was them. From there I observed what I’d feel when I could hear a spirit and how my state of mind needed to be. For me, I tend to hear them in an area above and slightly behind my right ear (which happens to be the ear that rings when I know a spirit is trying to get my attention). However, I have noticed that I tend to be able to hear my guide more whenever I’m sat down and doing rituals with them. When I’m talking to them otherwise it takes a couple of seconds for me to “calibrate” my mind to be able to hear them. I don’t know if “weaker” is the correct word but it does feel like a “weaker” connection when I’m not sat doing a ritual. For example, if I’m at work and want to ask something it takes a couple of seconds to receive an answer but it’s significantly quieter in my mind.

My guide has described it to me as them “throwing”energy and my subconscious interpreting it as best as I can. They tend to be the easiest for me to understand as they’re around me more than other spirits — they have admitted to talking to me the way I tend to talk to others. I wouldn’t say it’s dumbing down, I think they’re just trying to help me feel more comfortable. With other spirits it doesn’t seem to be that way but I do think what she said rings true as sometimes I have to pause and wait for a message again, because my subconscious needs a change to interpret it.

Anyways, what I’m trying to say is, maybe use your pendulum to confirm whether it’s them who you hear and then go from there. After that it’s really just understanding your mind and a bit of trust in your intuition

but I find it psychologically it puts people who are looking for gurus into an infantile state that is overly accepting and disables critical thinking.

I also see where Mulberry is going. if you would like to learn more about infantilization, Isuggest this video from Theramin Trees. 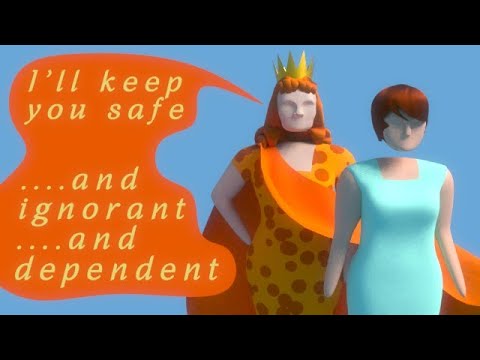 A little bit of an update, for those interested:

Contacted him again as he requested. He didn’t come as quickly as last time but when he did I didn’t feel a strong presence as much. He informed me that it was because he felt like he had come off too strong last time and wanted to feel more comforting.

I asked him not to call me “child” and he complied. When I heard him call me that again, he told me that wasn’t him but my subconscious as a facet of my imagination sees these beings as “older and wiser”, and that I automatically associated it that way.

For some reason, I struggled to properly understand him as I did last time. I do think he turned up as I felt a presence and my pendulum confirmed. I’m also confident my servitor would’ve banished if anything else had come through.

He asked whether I had felt the push to do something (I won’t go into details here) and I said yes. He told me that was him trying to get me to face my problems, that even if I’m manifesting that I still need to stop being in denial, to understand my emotions before changing.

He told me he’d like me to contact him once each day for the next thirty days.

I’m just a bit perplexed because I struggled to communicate/understand with him? I even had to pull a tarot card to help me out a bit and I’m unsure whether this is a signal that something is not right. Maybe he sensed some fear? It’s just a bit jarring because I was fine understanding the first time I invoked