Hey guys, I’ve been thinking of doing a spell. It’s unethical and you might think I’m crazy, but I’m probably going to do it anyway.

Was just wondering if you guys had any advice, opinions or comments.

So anyway, I’ve only evoked Lucifer in the past. But I’m sure this idea will work. I’m thinking of doing the red candle love spell where you call upon Duke Sallos and Prince Sitri, and making a list of people that I want them to make fall in love and lust with me.

I plan to do some research on both of these entities and find out what kind of offerings they like. I’ll consult with my tarot cards too. Then I’ll just set up a circle, have the two bowls with their offerings each, explain myself to them, show the list and burn it in the red candle. Evoking those two for the first time at the same time may be a stretch for a fairly inexperienced person - that’s one of the things I want your opinion on. Especially since I’ve never worked with either of them.

Anyway, it’s weird to put love spells on multiple people when your intention isn’t to actually get with those people. But I’ve been so frustrated this past year with not being able to find anyone to date. I tried so hard with RHP stuff and all they got me was a soul mate who wasn’t on my development/spiritual level, and so he couldn’t even love me the way I needed him to or be anything I needed. Then he dumped me and I didn’t even care, that’s how not in sync we were. It just feels like since I’ve been eighteen I’ve asked for the same thing and it’s never come to me. My tarot cards and even romance angel cards have told me these people are into me, but things never work out. So I might as well force them to come to me to punish whatever RHP entities were responsible for bringing me love, and also to punish the people in question.

It’s like, I know I deserve better than this. My own depressive outlook on my love life could’ve been what has kept me from being with someone. But I have tried to not want what I do want and it just doesn’t work. So the way I see it, waiting time is over, I know I’d be a wonderful catch for someone so I need to force these people into action and start to force the universe to do what I want instead of being ethical and waiting and trying to peacefully manifest.

This is from Gordon Winterfield - this might be a better option for you (I haven’t tried it) - I encourage everyone to BUY the BOOK.

The issue is that you might actually become quite attached to one of these individuals yourself and I think that asking the correct entity may be better, however you could end up making these individuals a complete and utter nightmare in that you end up with a stalker type of situation and could potentially put yourself in danger. Whilst certain practises might be great in fantasy, the reality might have more long term consequences for you. 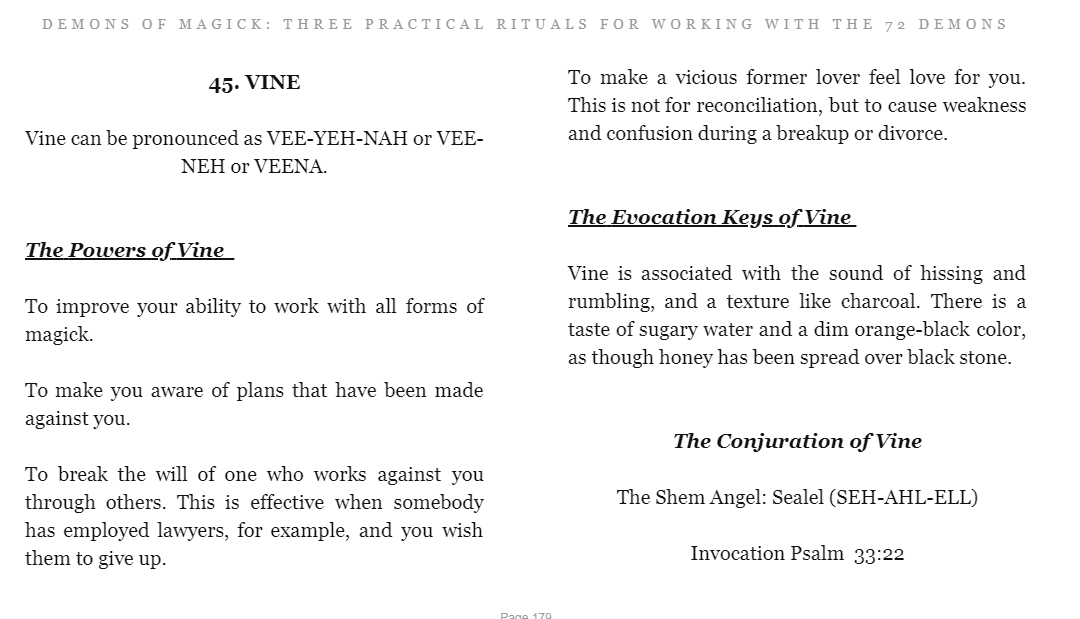 An angel? Might be a safer alternative. Yeah if one of those guys went crazy and tried to kill me haha… that would be a problem. Didn’t think of that.

But honestly I need to think over this whole thing. I’m mostly just mad at the universe for not providing for me, I’m mad at how many years I’ve wasted trying to manifest this without result. There are people I’m talking to on a casual basis now that I could end up dating, but I need this to work already. I feel like so much time has wasted.

I got tired of all the white light bullshit as well. Don’t feel ashamed of doing work like this.
I’d suggest looking into hoodoo, it really changed my perspective on things as well as giving me some very useful tools.

Nope, not the angelic bit. I don’t work with them, I was giving you some ideas.

I know how you felt at one point in my life. I was getting results, but not what I was envisioning it would be like… When it comes to love and relationships, it takes an understanding that it’s about evolution of the self… all relationships challenge in some way. So may be another approach would be to work on yourself to have the qualities you want in another. Whether demons, angels, loa, or ascended masters… they all can help give advice into the deeper aspects of yourself. Something missing, or a trait that’s been getting you the result that you’ve been seeing. If you’re just looking for sex, then you’ll have to be honest with yourself… It took me years to realize that about myself… it was the one thing I didn’t think of doing… because I’m a romantic, I didn’t do spells for sex… But after a bad sexual relationship, I tried it, and met some very interesting people, and no hurt feelings. Now older, 30, I know what I want in a personality and what I need to do to evolve in the relationship. I suggest working on yourself, and setting up a general spell for more sex at no one specific… love will come my friend… that’s for sure… but it takes developing relationship skills, and learning how to compromise wants for needs. Love is something we all want… but getting there is hard. But until then, have fun, have sex, and meet great people along the way. Best of luck!

Thanks so much :’) That’s helpful advice

I don’t think your idea is unethical at all. I don’t have experience evoking multiple entities at once, so can’t advise you there, but I too have been frustrated because it seems there is no one out there for me. I don’t know if I’ll ever find anyone again, so I know where you’re coming from there. I think you should try it if you really want to, and may you find love.