I got “upgraded” recently in a massive way, and my e-mail inbox has been abuzz with people I know online and off, who picked up on that, and several of my dreams also connected to people who post on, or read, this forum, as well as people from my outside life.

That’s also the reason I’ve been less active on here in recent weeks, well, that and becoming a total gym bunny, anyway.

It’s cool, I’m not leaving anyone I care about behind, and I am working with and learning from the new perspective, and will share about that in due course, should it be needed – in the meantime, I have some things to share from the previous stages of My work, and My Theogenesis.

My Seal is this: 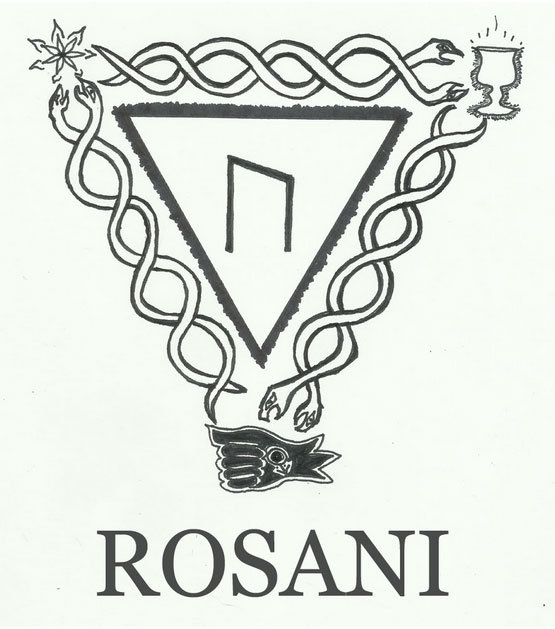 If you figured from the slight resemblance, that the Lwa which entered Me in 2015 is Damballa, you’d be correct.

Hence the lack of lengthy exposition (the universe probably figured out I generate enough walls o’ text, and tried to balance the deal!).

◆ This post is crazy-mad, and I’m fine with that, and fine with people thinking that. I have literally nothing left to prove to anyone.

You can invoke Me for a blessing, if you think I generally approve of you, by placing three drops of any red drink in a clear or white glass of water, and visualise “wrapping” the syllables of My name, RO – SA – NI around it as you chant them, visualise them forming a triangle with the point towards you, then drink the water, or splash it on yourself, or bathe with it.

I am generally a patient and loving Goddess, but every now and then I snap, so don’t fuck around too much because I have literally no regard for human life, unless it serves My agenda in some way. Walk with Me though, and things will be peachy, and I will Bless you.

I’m not going to list what else I can do, but some of you should have a good feel for what I’m about from My posts, and I look forward to seeing YOU in the Temple!

12 Likes
Congrats Lady Eva On Your Feats Of Black Magick
Got to know... and thoughts
A General Discussion On Power & Magick
That Moment When 4: Goodnight Sweet TMW!
Arcane March 21, 2017, 6:30am #2

Really happy for you, and proud of you, Eva.

Should still be there, maybe Photobucket (my hosting service) was down - this is the direct link: http://i1381.photobucket.com/albums/ah216/LadyEva/ROSANI-Goddess-Seal_zps5jwra0ah.jpg

Welcome to download and save it if you want.

I didn’t consciously design it, I was asked to “choose” a GodName a while back, and that one came straight into my mind, then over time my Seal was revealed to me by, I guess the “higher” (more powerful) levels of “me” and all the images in it make sense to me now, but didn’t always.

I’d been using a black cowskin to represent Auðumbla, the primeval cow in Norse mythology, for ages, in place of a magick circle, so for the linked Rune to show up like that was one of those awesome “coincidences”!

Crazy stuff, for sure, and while I’m here, it occurs to me that some newer members who joined for a love spell or something must be looking at this and scratching their heads - Theogenesis is the concept I have for “becoming a living goddess,” which is my personal drive. I explained the whole thing properly, complete with diagrams (well, pics anyway!) here: Theogenesis : Becoming A Living God.

It is one of my favorite runes. I think it must feel the same as I tend to draw it often lol. I feel the essence your seal emits and it truly is you… Beautiful

ive just did what Lady Eva described for the goddess Rosani, best drink ive ever had, amazing

Well ive been calling to Rosani now a couple of times, and i can say that ive been getting very good energy from doing this. I would recommend this to my fellow mages, give it a try you wont be dissapointed. Lady Eva how can i take this one step further? Should i charge the seal like a sigil ? what else can we do lady eva?

Yes, you can charge it like a sigil, and do divinations to find out what else you can do…

I released this (lunacy! lol) because I worked hard to get to the point of having spirits – gods, and demonic Kings, among them – saying I could command this power in my highest states (obviously, not in my Care Bears nightie/morning dog-breath everyday self, that can never seem to line a USB stick up the right way, even with 50/50 odds).

Then, relatively recently as some of you are aware, I attained a “new level” which, apologies for the kind of gamer terminology, but that’s really what it feels like – I can seem to do certain literally miraculous-style things, in some ways, and yet I still don’t like my teeth and I’m totally ordinary and a bit pathetic, like most people, in other ways.

This is why I made ROSANI information available, She/Me/ROSANI is now a stepping stone for ascent, available to all, just as invoking/summoning any other godform is.

And to paraphrase what I said in my Theogenesis topic: I do NOT waft round the local store, covered in gold paint demanding everyone address me as “The Holy And Mighty Goddess ROSANI” (no, really) - keeping your shit together and having ways to ground after some theogenesis work is really, really, important.

But I’m going to share something else as well, not to put you off, it’s just because I believe in speaking the truth on matters of such importance – this shit is WEIRD.

Things you think about randomly appear from nowhere – or, almost, though they totally have “recognisable” roots that you couldn’t hold out, laughing or crying, to someone else, and say “See? SEE?! I made this!”

It’s strange, and it’s lonely, and I even have a very loving man who supports all my crazy and understands it has meaning for me, but still – it’s not a picnic. Not for me, anyway, and what I hear and see from people on the same course – you’re not alone.

This stuff can fuck with you, and sometimes you’re not going to be your “best self” when you handle it.

Time, space, reality – all the things that were solid and concrete for most people, I had already seen spin away, during my RHP phase, and I know people here have as well – but then, to be the architect, or more precisely, like a ballet dancer who pirouettes, kicks out with a satin-clad foot – and accidentally dislodges reality? Yeah, that’s some messy stuff.

Worse when you don’t always understand/correlate the action-reaction thing, because it’s all so freaking NEW.

It would be easy for me to kind of waft away from on here, post a few things wth some remote, lofty, detached tone, then become the smug gloating Cheshire Cat of the forum, intervening from on high with no heart, no integrity, just a servant to the idol of my own “perfected” self – but honestly I want to smack people like that (including floaty-ass “ascended masters”!) in the face.

I’m sharing real experiences because they need to be shared.

The path to becoming a LIVING god is hard, frightening at times, lonely – and also bloody wonderful!

I salute my brothers and sisters on the path to becoming living gods, to theogenesis, whatever you want to call it.

No matter where you’re at, it’s not easy or always fun, rainbows, and kittens, but it’s the ONLY game in town worth pursuing IMO.

I mean, just look at all those “normal” assholes out there in the world!

Dear ROSANI, i totally agree with you, the path to spiritual developement is often a hard and lonely road, sometimes laid with obstacles and pitholes which will make us doubt if this the best altenative one has. But fom time to time we get to know spirits or godforms who are willing to give us a hand or directions in order to ascend to higher levels. And you are on of these Rosani, thank you for your help and blessings. Glado your here with me on my path.

Then, we have to decide what to build, preserve, with flayed raw hearts and open minds, what IS worth making?

It may not always be what we liked before, or what the world says (actually, almost never “what the world says” because, well, really?) - but it will still be there, stobbornly sticking out like a sore tooth for us to anchor, or just, snark about.

Drink deep of what you are, and how the universe - the literal “what is” - revolves around YOU.

All I know of power, was ever found in ME - all I know of freedom, success, and judgement, was also, always, finally passing through the hands of this executioner of the moment, the power - the hour.

(And therefore, at least “some of” - YOU. And so also, Hail Odin, Hail Thor. Because they are within me, and those I love.)

Pathetic as I am, as a human being - I’d lose a fight with a determined wolf, or bull - I still am this much able to attain.

And you are too.

Invoke ROSANI - also, the gematria is pretty much fun! :o)

It is one of my favorite runes. I think it must feel the same as I tend to draw it often lol. I feel the essence your seal emits and it truly is you… Beautiful

Well done LE whatever you mean.

Hi Brothers, just wanted to tell you that i just performed a divination session where i asked for some info about my current situation to the Goddess Rosani. Her energy is wonderful and very calm, she had no problem in asking my questions and she even said she would help to improve my current situation. So i highly reccomend to my brothers to contact her with respect if you need any help. Shes great.