There I was invoking Belial, using incantation from Asenath Mason.
Once done I used a summoning conjuration from the gatekeeper edition tome of Belial.

In Theta gamma sync the static rain moved in front of me, forming a column.
Inside of this column materialised a seven pointed flaming star, I heard a echoing voice.

“I keep this gate closed and guarded,
I now open this gate to you
By lord of the day and night”.

I soul travelled out of my body, building the critical mass to project.
I was projected through the centre of the flaming star, I was going through a wormhole.

The wormhole was a spinning tunnel of red lightning, infernal lava in geometric patterns and fire morphing into patterns like a demonic mandala.

I was projected through the gate, I stood upon a dark ground that seemed void of any material.
I looked before me and saw two thrones, merged into one.

Sat upon the white throne was, Belial as the lord of the dayside, wearing a hooded robe made of light.

Sat upon the obsidian throne was, Belial as the lord of the nightside, wearing a hooded robe made of darkness.

Belial as the lord of the dayside, his skull was white and yellow eyes.

Belial as the lord of the nightside, his skull was absolutely black with red burning purple eyes.

The merged thrones were moving in a counterclockwise manner.
Both forms held a book in their hands and spoke.

“The prophecy is coming to fruition,
The agenda of both man and gods,
The ancient covenant I hold in my hands,
Kavon come and look upon these pages”.

As I looked at the blank pages, I saw visions hitting me like astral bullets of the ascended/descended ones.

We walk amongst them, like the gods was walked amongst us. 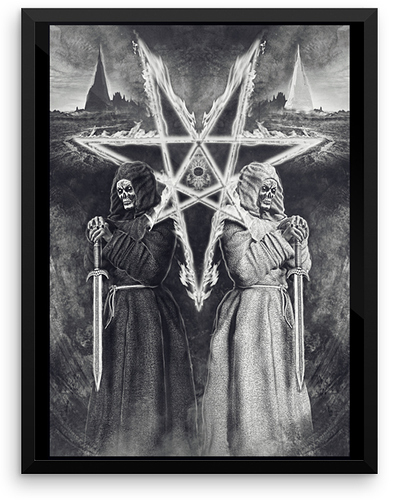 Pillars of the Porch

The employment of twin pillars or posts at the threshold of edifices dedicated to religious purposes is a usage of the greatest antiquity. Even the original intention of church steeples was not exp…

"The two pillars or obelisks (the latter the favorite forms in Egypt) were placed at the northeast and southeast corners of this paved work so that when the sun rose on the morning of the summer solstice, it rose apparently in the northeast corner of the universe (which for other reasons was also considered as an oblong, 3 x 4 in dimensions) and the shadow of the corresponding pillar cut the court diagonally ; thus describing the hypotenuse of the Pythagorean triangle (3-4-5 ), which was dedicated to Horns in Egypt, Bel in Chaldea, and Baal in Phoenicia and Syria, all the same god of fertility and increase as well as patron of the liberal arts and sciences."

The only difference was my gnosis , had been in seperate realms ,

It connected me to my shadow self, and my higher self, two different aspects, i had to do it in two parts though…

I think what i did was different, but you have motivaed and validated my decision to work with Belial today, regarding black alchemy and my work so far.

Thank you for sharing C.

There I was invoking Belial, using incantation from Asenath Mason.
Once done I used a summoning conjuration from the gatekeeper edition tome of Belial.

hello man,i would like to know from what book are the incantacions to call him forth as the lord of dayside and nightside.

Yo! So i own the book your looking for.

I started my path with Asenath Masons Luciferian/Draconian tradition…The Draconian Dieties are introduced and described in detail/ history and lore of each Draconian divinity…after each description, follows individual Invocations for each and every entity…rather lenghty ones which for me are very potent…

So what i can do @Xag_darklight, is attempt to take a photo of the 3-4 pages with Belials history , lore and traits, as well as his 2 page Invocation written in first person so to create that intimate connection as the sorceror embodiss that God in merged gnosis…it makes u feel like you are that spirit…I will send asap , and i have not forgotten your rsad bro…im new with tarot divination so im slower than most but i make sur its correct as possible​:wink:

Also, you can attain much more info on Draconian Magick through the Temple of Ascending Flame website…
The pages im sending you are from Draconian Ritual Book. By Asenath Mason.’