The things I see in my dreams

A lot of things appear to me in dreams and I don’t know who or what they are. I used to be too scared to draw them but it’s become such an every night thing that they dont faze me anymore.

Feel free to reply if you’ve seen it or have an idea of what they are. Perhaps I simply have a terrible imagination, but honestly thats why I refrain from looking at dark images. I don’t want those to influence what I see 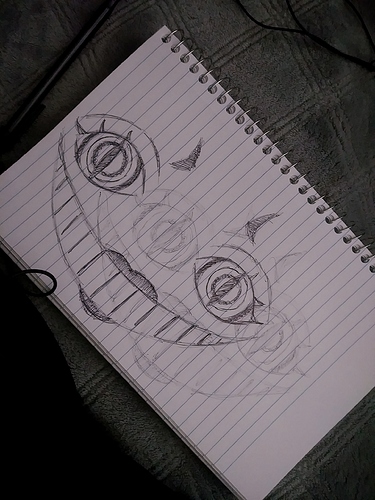 This is what was in my dream last night when I asked for a vision of my future if I decided to make a certain decision. It was very annoying. That isn’t how I draw eyes btw, I have pretty good art skills so I made the sketch like that because thats exactly how everything was shaped. She, he, it kept moving in and out and around and saying “so you want to see ? so you wish to see ? I can make you see”

Edit: her eyes also kept moving from side to side, s(he) would look one way and then the other. This is also against total darkness. I saw nothing but that which was supposed to be a face

I usually travel to places inside of my dreams but I don’t remember it,sometimes I get visions of spirits in my dreams and they are usually doing something that concerns me or giving me specific messages,I had one astral/telepathic conversation with Murmur in a dream,than I woke up and I though I was talking to a friend in real life than I realized it was him that was a weird experience for me

Also, @mercurydefined I think that drawing can be used as a sigil too idk if its for a spirit or something else

Yeah I’ve thought about that, I don’t want them to have any windows so should I tear apart the drawings or is that unnecessary and I simply just don’t let them out and make sure to banish often

Would I consider Lilith to be a guide ? She often comes around when I’m in a stressful situation and can’t cope well, she calms me down and helps me to be stronger and keep on going. I feel like if she does that then obviously she’s a guide but it’s just that I don’t really see others speak of her that way; as motherly

@Aiden666 she said it was low level and not to listen to it, told me to rip it up into a lot of small pieces to make sure its image/energy gets sent back to where its from and belongs. The same way I try to burn my thank you letters for her to make sure she gets them in her “dimension”

Than do it…She probably saved you so…HAIL LILITH!!

Also if you want me to do this,I can pray to Qalilitu to kill these spirits she is the most deadly spirit I ever met,she is a great and powerful archdemoness

I’ve never tried killing things before and part of me doesn’t want to, but if you think it should be done then go for ittt @Aiden666

She, he, it kept moving in and out and around and saying “so you want to see ? so you wish to see ? I can make you see”

It’s asking permission to work with you? But it’s doing it in a really undignified way. Doesn’t feel like the highest vibrational entity on the block. Maybe it can help, but at what price? I would banish this one and work with a named daemon with a good rep instead. Also I dislike clowns and that’s a clown - got tricky written all over it.

Look at it closely

Look at it closely

Lol no. When I look too much into certain beings it makes me too inviting and brings them closer. I don’t want to be their portal and I’m still trying to learn how to control that

Oooo I see you, I’m sorry I mistaken you my goddess for a mortal. I’m such a fool… you have a lot of power. It might take a while but you will harness a lot of power.

, I’m sorry I mistaken you my goddess for a mortal

hey hey whoa whoa whoaaa- being a little overly sensitive and receptive from what I know right now, simply means just that. I attract things a lot, some people just do. I’m still a ‘mortal’ though

I am a tyrant of the goddesses, I am also an Oracle. It’s my curse to know people who are destined to power.

Soooo you saw the Cheshire cat?