The Mental Patients are Grazing the Grass that Surrounds the Asylum

My rancor breathing gives me iron breath
I have spiritual indigestion
& the hell is excruciating…
the pain, the pain is excruciating & everything looks like its melting plastic.

Entropy,
in my journal doom room.
Death pod. What I feel is an entropy of journal entry. This is summer. This is death summer. With no air to breath. I bow down and worship the furniture. I believe in worshipping furniture at low, low prices. Brought to u by propaganda death insertions. The entropy is engulfing me completely, & I can’t stop this suffering. I float on my back in the mire and watch the nightmare go by. The consepts form into bricks like turds that stack and then one by one they slide down & out of my collen track. Turds that u kick and pass around the bon fire. Then they can be digitized and moved back and forth or up and down like lego blocks. Rue for the marsh in my ideolirium. In this journal room womb enclosure. What a good and awful stupid life I have. Their is still disatisfaction. Something is missing, and the philosophers say that this missing gap is inharent in the patterns, but I’m still studying the phenomenon and have not figured it out yet. Maybe I’m in denial about the nightmare because I’m spoiled & soft. I moved back & forth on the technicolor dial. The room turns inward and there are branches with leaves on them growing into the room. Me thinks its a trap. The walls are closing in. Death keeps getting closer and closer to my face. But this hole in my brain feels dirty & nice & safe to dig up. Thoughts are safe, & i feel this hole in my head is working itself out but there’s still a hole in my head. So I just try & hold on to everything that I am & when I feel down, I give myself a little time to release the pressures & the loss & im holding on, just so I can, & the hole in my head is just buried in the dust.

All I know is that I can’t wait for death sometimes I feel it’s pudding benieth me
that is pudding, chocolate pudding
At my ankles
Ahh…sloshing around in the pudding marsh,
& the trees bend down
to shake my hand
there all so friendly
there are lots of clouds overhead
with sharp & jagged edges webbed
where the prairie drops down
and fills the landscape
there is a tree wearing pants,
& the pants are around its ankles
& a guy is kneeling before the tree sucking off a big dick of bark
The tree is shaking
its
orgasim leaves down
slowly
nicely falling in
afternoon hypnotism
Or perhaps it is evening
under restful waking hours
Which I can’t stop from passing
but I suck on my antibiotics nonetheless
and hang out in the little patty’s
of mold that grow up
In the shape of fan sprouting mushrooms
the sky is purple, indignant
and indefinite
and the clouds
are illuminating the sky with a light shade of pink
which is very nicely added there
as the color of the grass shifts back and forth on a hyper color dial
so it never stays the same
it never stays the same
It always changes
that way I can lay along there
and never have to worry about continuity
only change
only uncertainty
that is until I have to go back
to my sarcophagus with
the sound of dirt piling
on top of the lid

Time to write time to die

Into the pit of shit,
…took an inverted trip to hell last night for the first time in a hundred thousand years. I haven’t been taking those druqkz for almost a year. I did them maybe 4 or 5 times last year at the most. I haven’t been directly interacting with my guru who used to be Neem Karoli Baba from the right side of the spectrum and as a result the grandiose samadhis were quite muddy and dark. Not slick romantic wonderful crome plated darkness either, I mean more like diarrhea darkness. Like i was up to my anchles in a pudding marsh of diarrhea shit.
I called on some goetic spirits like asmoday and saw their consciousness enter the sphear which was like this big wonderful 5 dimensional holographic screen that I was viewing all this crazy imagery on in my deep meditation like star wars or some shit. I was sitting inside this room in front of this giant virtual reality screen. Thats the best way I can discribe it. Some of it was creepy and a bit frightening and probably not good but also very intriguing and completely enjoyable. When I do this without protection it’s extremely dangerous especially when I’m calling on other entitys that I don’t even really know while on bad druqks. But I didn’t know what else to do because, I’m trying to build a new paradigm without any kind of reference point. & Im way too broke to take any of E.A.'s courses and sober work lately has produced dull weak results. I’m bored with the normal spiritual rituals as well as everything else in life. I think Im about done with everything.
A large gray catfish like entity swam up to me, lached onto my head, & suckled my brains. It suckled my brains for a moment, and then I shooed it away and it swam off. This took place inside a dark ocean of frightening bliss. It was just like being under water. Underwater holography. It was like this wonderful awful fluid that could keep u so high that u might do something irresponsible. Like I was so fucking enraptured that I just sat there for a few seconds while that awful fish creature suckled my brains out. I didn’t come too and have the common sense to realize that I needed to get rid of this fucking energy vampire thing for a cupple of moments. These things aren’t like my guru. Whom I trusted to do energetic modifications serendipitously. It was just some random creature. I’m used to maharaj-ji. I guess thats another reason why i hesitated to shoo the thing away, out of simple habit. 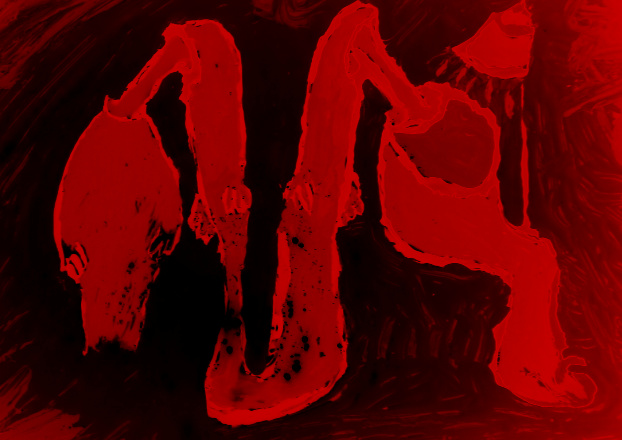 I could hear voices talking, above my head. Speaking almost backwards female serpentine sounding sliding sss,'es and this hauntingly peculiar music was playing. I’m not quite sure what was in the room with me or how many of them there were. It definitely felt like more than one. All this came in with asmoday. I like asmoday for some reason. Maybe its because his sigil has a big penis. Its actually supposed to be a snakes tail, I guess. That’s what the read out says at least. My visions began to turn into decay, like decomposing body parts. I was getting paranoid partially because these druqks were so fucking crummy. I couldn’t quite figure out how to reverse the process of entropy because I’ve only delt with spirits on rare occasions accept for Neem Karoli Baba & Hanuman, and only a few others & I didn’t want to have to call on them to help me with anything as if they were my parents. I’ve been trying to do something else. There is all this other stuff that I can’t seem to crack the code on. Like these demons. Of course their is also a lot of crazy shit in my life which I’m not telling u which is in the way.
So since i couldn’t seem to reverse the visions of decay, i had to call Hanuman who was close by. The visions were all consuming. I couldent reverse them on my own. It wasn’t my fault however. The personality of the drugs that I was on is extremely negative. Not in the romantic sense, but in the death sense. There is a feeling of persistent death paranoia and decay which permeates the experiences no matter who u are. The sense of shakti running through me was like a dead radio signal. It takes a lot of practice to use these drugs at all. I had no way of creating barriers between myself and this abyss or whatever it was. I don’t know what to call it. The druqks may have been terrible but they were powerful enough to allow me to pass over the thresholds. Its better than television, and other normal bull crap. I just repeated Hanuman’s name in my head and it transmuted the death into divine consciousness which engullfed the visions. I mean, that sounds corney, but its true. I have already merged with Hanuman so all I have to do is call him in times like these. I felt the divine consciousness in me absorb every entity thru my perseptions that may have been in the room. Because of this I wonder if I’m even going to be able to associate with demons?
I felt that the entitys which were there had either left at this point or were hiding their presences & I just couldn’t see them. How schizophrenic this sounds!! I must have completely lost my mind! If I couldn’t have called on maharaj-ji that stupid drug death effect would have consumed me. I wish i had some better druqks on me now. I need to make a new strain. I want to try this again but im not quite sure how to go about it or if it would even work again. I’d like to convene with one of the demonic kings and share some samadhis together in order to get better acquainted and serve to further dilate my intrigue. I feel lost, but I also have some great tools at my disposal. Last night was almost a success, as awful as that seems. My results were pretty optimistic, but I think I’m about done with all this, & I don’t want to continue with any plans for the future whatsoever. Because the reflection that I have seen in the universe tells me its time. I know my experiences with maharaji-ji and how he transformed himself into death when I last saw him. And I know the vision of death that I had when I was just beginning this medicinal excursion. He showed me death. I have these hollow experiances every day. I know the people I pass in the street & women who come onto me that I just ignore. Life contains nothing. I recognise the patterns in the reflections of my karmas in the universe that I see around me that I’m reading. I can’t do this anymore. I’m already dead, & I have contemplated death. I butter my biscuits with depression. It doesn’t even make me sad. Destiny is not one to entertain pretenses. Though a person can live on in delusion or denial.
As I write this one of those tacky ass ice cream trucks goes by in the background. I hate those things. Its playing pop goes the weasel on its lowd speakers. Puffy mischievous assholes are probably raping children in the back seat right now . “Hey, asssholes”! "Fucking weirdoz!! “Who dose that”?!! All the terrific ideas are fading.