The king in Yellow, a warning

For those of you that understand the lovecraftian current, you know exactly who I’m speaking out.

Just fucking Christ on a goddamn stick, he’s stuck in my head.

Ever since I dismissed him, and I use the term dismissed lightly, he has not left me alone. It almost sounds like a creepypasta, I worked with an ancient deity, and now he won’t leave me be.

I heard his name mentioned one time in a story that I was listening to, and suddenly, he fills my head, and I have an urge to get a certain tattoo on the back of my right hand. The yellow sign outlined in Black.

I’m not calling to you guys for help, I can deal with this. However, I want to give a slight bit of advice, if not a warning, that if you work with the King in Yellow, he is not going to go away. Not until you handle it as your own inner God.

This entity definitely will leave a lasting impression.

The Old Ones, the Gods of the outer Abyss can not be banished or dismissed: Cthulhu, Shub Niggurath, Azathoth, Dagon, the Yellow King… All of them actually

I know, their influence can only be diminished for the time being.

Ultimately though, I have to assert who and what I am in order to keep myself from going into that infinite spiral.

They do take in count the Great Work thou so any working with the wrathful Gods of Azerate should help with grounding, especially invocations.

Anything is real if you want it to be. There’s people who conjure up Sailor Moon and have her and her minions fight battle in the spiritual plane for them.

Acknowledge your own Godhood, and it hold on to your sanity. Because everything you knew about the spiritual world is about to turn on its head.

On a side note, I would recommend taking it easy when working with the old ones. This is a really deep rabbit hole.

Appreciated for the deep advice.

minions fight battle in the spiritual plane for them.

The astral and spiritual plane aren’t the same thing. They conjure them to do such in the astral not the spiritual.

Interesting. I have mentioned before that the Lovecraftian entities seem to be reemerging stronger than ever lately. And The King In Yellow has popped up quite a bit. Just last week I think it was, someone was asking me about making a Yellow Sign altar piece.

Sure, Lovecraft mentioned the book in his stories because he liked adding the titles of actual books alongside his made up ones in order to give them more realism (he did the same thing with the science of his day, mentioning actual headlines from science journals), but the King in Yellow was written by Robert W. Chambers, and is a perfect example of occultists making stuff up to fit their own peculiar ideas.

While you are absolutely correct, the king in yellow has been tied to Lovecrafts mythos since Lovecraft wrote him into it long before occultists started working with the current.

has been tied to Lovecrafts mythos

I disagree. The term “Cthulhu mythos,” for example, was first coined in regards to the works of Lovecraft by August Derleth, after his death, when Derleth began publishing his work, and adding his own Christian flair to it (Derleth is the one who turned the conflict between the Great Old Ones and the Elder Gods into a war of good versus evil). The King in Yellow was never really a part of it until occultists starting going around making claims that the Necronomicon was real, and pulling parts out of the stories to use for magick. In fact, in all my reading on the history of Lovecraft, the King in Yellow is only considered part of the mythos by occultists, no one else, not even literary historians.

Yes, to work effectively with any of this we must, at some point, be able to recognise this as an aspect of our True Self, i.e. consciousness. Anything else usually causes problems.

I have to disagree with that. TKIY has been used extensively in reference to all things Lovecraftian for quite some time with no ties to occultists. It may be more modern, but as far as just media goes it’s heavily tied to Lovecraft. There are a few good videos on YouTube documenting the history of TKIY though and how he has traveled through literary works of many authors from the begining. But the fact remains he is best known from Lovecraft.

But the fact remains he is best known from Lovecraft.

That does not, however, make it part of the mythos. As you said, the book is referenced in a lot of other literary works, but being first encountered in the work of another, does not equal it being actually part of that work.

I first encountered the King in Yellow in Lovecraft, but I have only ever seen it truly considered to be part of the mythos in various occult works, nowhere else. I have always been fascinated by H.P’s world and have read extensively on him and his literary opus, so we’ll have to agree to disagree.

I appreciate the convo, my friend

Fair enough. It’s always nice to have legitimate healthy debate on here as rare as it can be lol.

Also more on topic, this came across my feed on FB today on the Cthulhu Hand Luke page. It’s from a Cthulhu RPG book I believe. 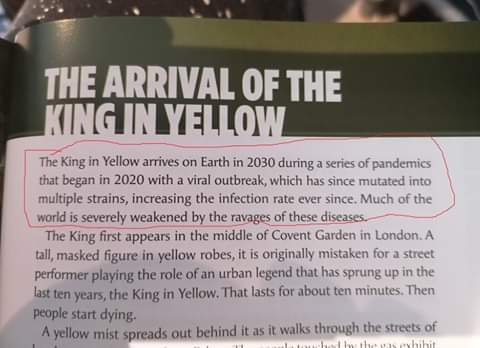 Lovecraft sparked my interest in dark magick. I find his amoral universe quite amazing, and his mix of science fiction, and science fact unique in the genre. He was one of the first to combine science fiction with horror.

He didn’t spark it with me but he certainly stoked the fire lol. What’s interesting to me is how so many of his stories seem to be the basis of much modern conspiracy theory. From inner Earth civilization, reptilian beings, etc, it’s like it comes right out of Lovecraft. The Mound is a great story that covers most all of it.

Once one gazed at that sign there is no escaping him. He won’t leave.