Earlier today, I read a comment that claimed to have used the Greek Magical Papyri to cast a spell, and it success. Therefore, I searched for the book, and came across a spell that I was interested in casting. A photo of the spell below: 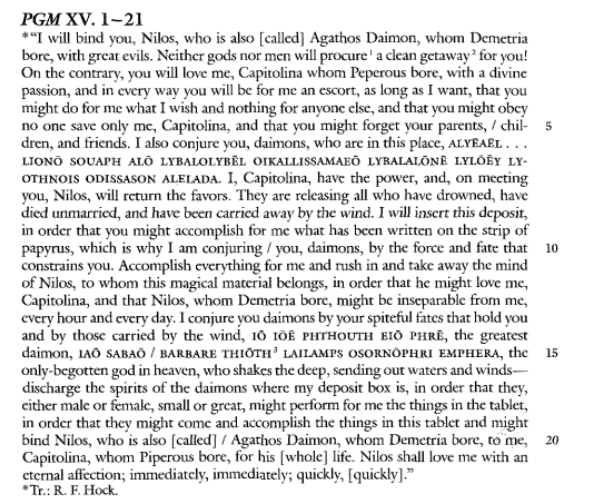 Does anyone know how to pronounce or know where I could find a pronunciation guide for the parts that aren’t in English?

In doubt go with your gut

Would you say the rest that weren’t vowels were how English speakers would normally pronounce them?

Also, the spell at one point says “I will insert this deposit,
in order that you might accomplish for me what has been written on the strip of
papyrus, which is why I am conjuring I you, daimons, by the force and fate that lo
constrains you.” Am I actually suppose to write on the papyrus or something. It was not instructed to, but this book instructs things weirdly.

That’s how I would yes.

I haven’t done this particular spell. If it says you should deposit the paper with the spell on it, like a petition paper, it would imply writing it. Unless you want to deposit the entire book