The DANGER of inviting a succubi into your life

I dont care the respons i get on this post.
With certanty its my last so idc…

Be aware that this succubi buissness isnt at all without its negative effect.

I have one, strong one, fucking infested in my energy at the moment. It dosnt respect my free will and feeds from my brain like a maggot…

Sex magick and all that sure… But this is fucked up. Its like a stain that wont go off. But i will defeat this one be sure.

Just a warning. I feel nausious in this very m9ment writing this because of the entity draining me dry.

I dont give a flying fuck how much experience you got in this topic. This shit is real. I talk from experience.
And it just wont leave.
Out.

I’m sorry to hear that

What did you ask for exactly when you summoned her? Did you do the letter of intent ritual?

I think that actual incubi and succubi are advanced enough to not go around bullying people cause they can. Some may be malicious, like how some humans are malicious, but I honestly believe it’d be less common for an incubus/succubus to be malicious than a human. Cause when you don’t have a body there’s much less confusion or reason to be a dick.

There are many parasites out there that probably are sexual and attack people, but I don’t think many incubi and succubi would. If they wanted to hurt someone I don’t think they would attack a magician who could fight them off, cause they’re probably smarter than that? Whereas parasites often aren’t.

My succubus was reading your story, and she was absolutely horrified.
Oh, wow, I am so sorry, that is not how we do things!
She is in tears over that.
Don’t let this stop you from finding a respectful succubus in the future.

Do a banishing ritual, and use her actual name whenever you do it. If that doesn’t work, you may consider an exorcism.

Were you may consider asking our Resident succubus expert, @succupedia

Inviting a succubus is indeed serious business. But some people use the old Parker Brothers Ouija Board instructions for Succubus calling. They ask for one - are not specific and basically take whatever flies into the window. That’s not smart. There are people who can guide you to find one that is compatible with you and one that gives as much or more in a relationship than they get.

Did you invite it? If not you should banish! Otherwise I would suggest asking it to leave you and light a candle for it!

good luck I wish you well!

If it gets to bad and you can’t get rid of it - contact JD Temple from the BALG site. I am absolutely positive he can help you get rid of it. He does a lot of work with Succubi. He may charge you for the help. He does do rituals for hire after all. But succubi work (using Lilith) is one of his specialties. If anyone can get a bad one out of you life it will be Lilith and JD will be the one to know how to get her to help you.

There seems to be some kind of misunderstanding of how physical spirits, like the succubus, works in our world. And more so in how they work to establish a connection with us humans.

The physical astral experience are connected, mostly, by our head chakra and it’s connection through our nervous system. The head chakra is massive when it comes to astral functionality, and once it’s opened, it’s hard to shut it down.

Apparently, some people freak out when this happens and create a “monster in their closet”, instead of letting the energy and the spirit do it’s thing.

If you don’t have the guts to run it’s course, and if you truly believe it’s a parasitic entity rather than a succubus, do a banishing ritual and get rid of it.

I, personally, think you freaked out for nothing.

No I had my crown chackra opende for years now and know that feeling swirwling hat very, very well.

This is a strong succubi, four times stronger then me that literly SUCKS out energy out of my head espescially in the back of my head to the left. She leaves mental images of The Grudge girl when she comes and i KNOW thats synonymous whith succubi

The pain has even got so far that I even feel it physically now. Like someone is picking my skull with a needle.

I tryed everything now. Begged, screamed, cryed, cursed
You name it.

She literly is draining me dry

I’ve experienced that physically under my sheet, so I know a few things about that manifestation. But she wasn’t malevolent at all, when it happened. You should know that a darker manifestation isn’t equalivalent to “evil”, right?

What if your experience is something you just have to go through to move forward on your relationship with the succubus? An experienced magician should go through all kinds of energies and it’s manifestations, just to simply know the differences of it, and it will make you stronger and resilient when other magicians or spirits try to fuck you over.

Like someone is picking my skull with a needle.

…or maybe she’s working with your chakras and open up the portals to the astral plane: 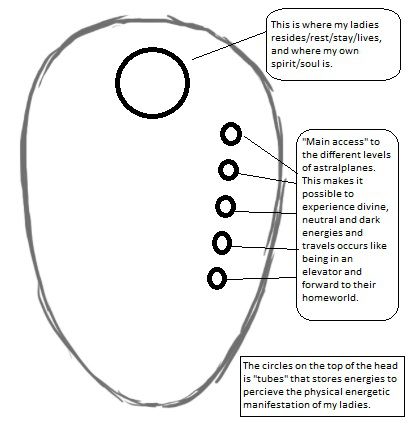 The “needles” could be the connection that makes it easier for you to astral project, just by simply focusing and closing your eyes.

It is said that chosen one’s will get the full spectrum of their future spirit spouse. It can be nasty and intimidating at times, but it’s honest and truthful. It also makes the bond stronger.

Yes, I read that from a earlier post of yours years ago that s why i know it.

Thing is this. I changed my course complitlty. These last few years has been extreamly transformativ for me in case of personal development, health (getting sober) and becoming a adult and finding my path. And i have found that i had to leave black magic completly. I cut the ties with my patron demon king Paimon, lucifer shown his light and left me for the last time just days ago. And i only work with god, energy, angels and spirit Guides and i finally found my place. This is where o thrive. As you found yours…

What im trying to say is. … The whole succubi thing was me trying to figure myself out and now when i have arrived do i still have this extreamly angry, violont succubi on my hands who is hurting me. I just feel like it has to end. Or am i Bond to her for eternity? So confused right now

What im trying to say is. … The whole succubi thing was me trying to figure myself out and now when i have arrived do i still have this extreamly angry, violont succubi on my hands who is hurting me. I just feel like it has to end. Or am i Bond to her for eternity? So confused right now

Well this makes it different. Need to say these things from the start.

This was a serious relationship for her and it doesn’t seem like it was for you.
How would a human girlfriend take it if you had her move in then told her to gtfo?

This looks like a lot of fixing something you broke. I’m sure it can be done but you’ll probably have to own up and treat her like a person.

Be aware that this succubi buissness isnt at all without its negative effect.

It is your personal experience.
Any magical operation can cause unpleasnt feelings, but it doesn’t mean that sexual magic is a bad thing. Maybe you need more time to learn.
Sexual magic is very powerful since it works with our strongest insticts.
Just take your time and try to stay calm.
It’s all up to you.

I have never experienced anything negative about my succubus
that being said, they are not sex toys or like a fun habbit you can just throw away once you feel you are done.
both of you invest (or should invest) alot in the relationship and it should be taken serious, not everyone understands that…

there are certain rituals to remove a spirit or a succubus, they had them in king Solomon/Davids time, and they are online in quotes of old texts, but removing her with force should be a last resort

Until you cast it off with Jesus. No evil can stand hearing the name of Jesus the very name knocks them to their knees trembling

And you will be knocked to your knees by @Lady_Eva 's almighty ban hammer if you shove your religious dogma down people’s throats like that. Just a fair warning.

Wow, just WOW! You pretty much describe the insanity of religion here, and the only one’s evil is not the succubus/incubus, but maybe…you…or the Christian doublestandard you’re supporting? Oh, the energy you drain with all the rules you apply in the name of religion, rules that’s not even in your book. And rules that lacks connection with the one you call God.

If I were just like you, would I say that you should “repent to Lilith or you will be damned”?
No, because I don’t speak for and judge others in the name of a deity. A lot of you do these kind of things, which is very contradictive. Don’t speak for others without their known presence and stop judging in the name of others than yourself. No wonder some of these spirits are drawn to you?

Uhhh LOL, you serious? I wonder what has drawn you here in the first place. You’re on the wrong forum so please logout with your preaching - which most of us already know what these beings are, what most of them are capable of and where they’re from.

That moment you realise that sexy broad of a succubus is just a bear that feeds on energy.

Now that I am not a christian anymore, I realize how crazy we sounded…

I agree. And I didn’t mean anything negative directed against other followers of Yahweh, but I was referring to when I was a part of an evangelistic Protestant. I realize how crazy some of us sounded.