I’m going to make this journal, hopefully to catalog my progress in a more streamlined manner. Balg is probably the only place I can talk about deep and complex shit without getting banned on the spot. I dont really like writing blogs online though; staring at screens makes my brain feel irradiated, but I hate writing by hand even more because it’s so much less efficient. Maybe I need to get some orgonite stuff; I heard that helps with EMF protection. This is also partially in effort to help me ground myself into acting the way I want to, if that makes sense, since what I’m doing is evolving my ego into a mirror image of the higher self I am designing. Ive always had a tendancy to simultaneously being way too hard on myself and not strict enough and I think writing stuff down might help me balance that out. It doesn’t help that I’ve never incarnated human before either and sometimes it really shows. But that’s neither here nor there. Alright…

Magically speaking I just hit puberty again two days ago. I’m actually not joking though; I’m shapeshifting my higher self again. I will be using magical genetic engineering to accomplish the structure. I have a platform to use for this stuff too, it’s actually a part of my soul. So, I’m basically just creating a new form for my soul to take. The higherself I want will fragment into more aspects, merging at the root, and merge back with it’s further fragmented aspects at my third eye. Third eye section left and section right are two identical twinflame entities that can also exist in outside space, which is to say they can be separate from me with introspective and introspective self awareness, but when external they merge. In the process of merging the two twins they attempt to interact with each others mirror/shadow, with a point in the center that is my HigherSelf, it becomes my “mount”, or my “secondary body”. When Im done with phase 1 of the shit I came here for and shed this human vessel I’ll probably redesign myself again and figure out what parts of the human body to keep with me. But eh. This is good for now. 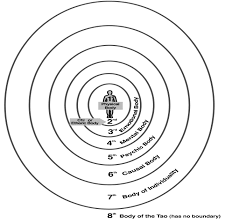 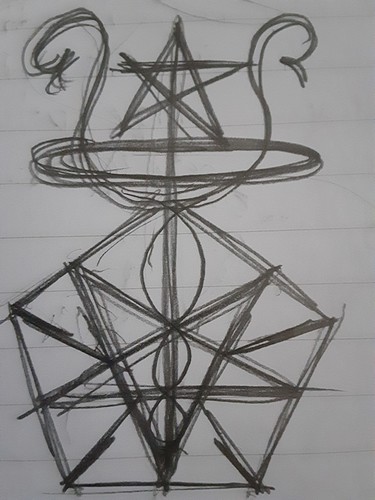 I felt the aspect I created needed an external grounding force much sooner than I expected. Put him in this idol, which I changed the colors of which alcohol markers.

Come forth my beautiful Daisho, The Smiling Gate, He who Transports the Forienger of The Farlands, The Translator. Birth forth as an aspect of and vessel for myself, as an engine of sophistication, Submissive to your Rider. 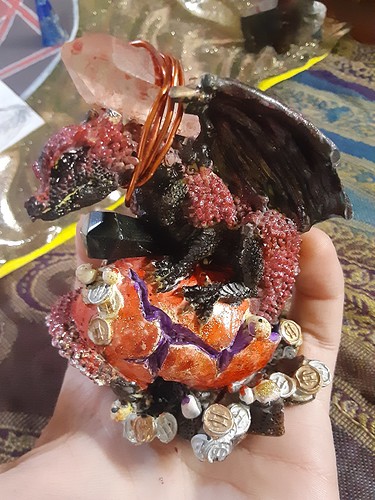 I also have Belial working with him now, exchanging data, so that Daisho may learn Belials Confidence, to be Unwavering and Uncompromising, and Belials attitude toward the nature of Wealth. Daishio is also learning a thing or two about hypermasculentity, which is the biggest reason I had Belial do this. It’s not in my nature to be hypermasculine, for good reasons, but this currently pure aspect of me is supposed to compensate for what I dont have/am choosing not to focus on, by being a self improving entity on it’s own that can operate from a different vantage point. 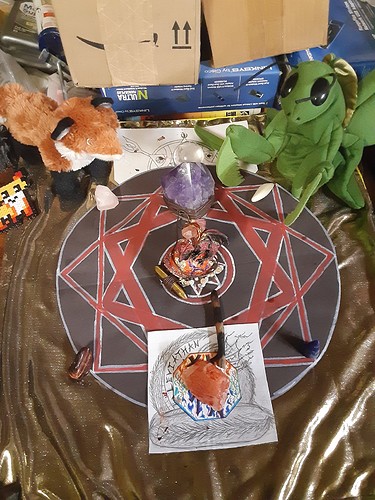 Its actually kinda neat to work with Belial. I’m not looking to be a part of the infernal hierarchy, even though they’d gladly take me in (as they do with most of you), but about a year ago I called to Belial for the first time when I was very new to magic, and he didn’t even show up. Just gave me the vibe from a distance, in empathic communication of “I’m disgusted by you now, you were once exemplary, and now you are a stupid child.”

I didn’t talk to him again until now. I’m much… much more advanced at this point. Learned what I came here for. Put some effort in. I’ve learned so much and so fast in the past year, but only now am I truly dipping my toes into the waters harnessing something great here. Eh… maybe I’m too hard on myself there hah. I’m 19 and have been practicing for a bit over a year. So… coulda woulda shoulda been doing xyz to get me here faster. I’ll say the same thing next year too. Hindsight is 2020 if you’ve got any self reflection at all. But, Belial told me he noticed that I’ve grown, and due to that he’d be willing to work with me on my stuff. Though, and I realize he does this a lot, he asked me for blood, which I decided not to give to him. I was gonna say more about it but Belial doesn’t seem to want me to relay that part of our interaction.

I’ve been in a bad mood lately. I can’t stand the human body, or what’s been done to it rather. Its not humanity’s fault, for the most part. Humans didn’t even evolve naturally to begin with. But my main problem is asymmetry. Two main nadis left and right (ida and pingala) , one front and one back, and one in the middle (sushuma). The way these typically flow isnt symmetrical at all. Left down, right up, back up, front downward. That’s mine anyway. Even the arms and legs dont work symmetrically. “One hand gives, the other takes” is a common phrase, representing the polarity of each appendage.

Uhh… no. I dont like it. Its dumb and imbalanced. I’ve managed incredible things, when my energy flows symmetrically. The first time I did it, it was unstable and lasted only half a minute, but I levitated on the spot. Ive come to realize, feats of power aren’t that difficult, when one is balanced and has energy flowing properly.

But holy fuck is it difficult, to rewire the human energy system, bioelectromagnetic fields, etc, into this system. I can’t seem to pull it off when I want to. I’m training with @Yberion now, and he told me “nature is asymmetrical, and your flow is perfect as it is”. With all due respect, that’s not true in my eyes. Your “even the earth, is slightly egg shaped” metaphor falls flat, because even an egg is symetrical from an “upright” perspective. I know it’s possible to achieve, because I’ve done it before. Its inherent instability in what I did was because I was a novice, with little experience in controlling energy, and my technique was reliant on my concentration.

Electromagnetic manipulation, is extremely easy with identical positive or negative charges on each hand, not positive on one and negative on the other. Repulsion, the push, THUUM!

The asymmetry stuff… it just rips my spirit apart. Being comfortable in ones body, and their energy system, is the bare minimum for an entity to have consistent inner peace generally speaking. I’ve literally only met one other person, who feels the same way about asymmetrical flows and the funny thing is, we’re both very foriegn otherkin, who haven’t incarnated human before. Hah. Imagine that.

Ranting aside… I do my best. I try to stay positive when I can.

Daisho has been absorbed into the devil gene, and taking the name Kosmo. I just did the DevilGene ritual today, after familiarizing myself with the currents and changing them to my needs. Not much to speak of on that yet, but we’ll see how it goes. Its picking up a pseudo consciousness to it though. Not self aware, but a consciousness nonetheless. But, that partially comes from Daisho I’m guessing.

Oh another thing-
I’m training on eye magic with Amaterasu, the Japanese solar goddess. Apparently there’s something called “Rinnegan Dojutsu” from the anime Naruto. Idk, I’ve never watched it, but that’s the basic concept and it actually kinda looks like that. The anime seems to have a legit magical current behind it, from what I’ve seen so far. @Yberion introduced me to the concept, and according to Amaterasu I display a talent for this energetic technology. A part of that, no doubt, is just because my soul has a void inside it. I can make myself very much a hollow vessel by embracing it. Technically my soul contains its personality in the shell, around the void. A shapeshifting porcelain husk, and perfect emptiness.

Using the eyes seems to be hard on my vision. I was surprised to find out, but in the anime it connonically describes that users of a certain style of this eye tech, will go blind. That’s interesting, because that’s exactly what would happen if one doesn’t take careful procedure.

I screwed up in my training a bit, and my vision started going very dark, with white sparky flashes randomly occurring, like the sun was blocked out (but it wasn’t), as I was starting to distort and rip apart the nerves behind my eyes. It wasnt painful so much as a “oh fuck this doesnt feel good” moment. So, it’s kinda finicky, and you need to have a protective layer across your eyelids. Fortunately saline is naturally produced on the eyes, so it’s not too difficult to set up a system in which tears also excrete an astral healing and protective substance. It’s pretty fun so far. Its giving me added boosts in telepathy, clairvoyance, aurasight, etc.
Grayish flashing in my vision is also starting to occur, in 6 points on each eye which in my center field of vision looks like 6 doubkecirlces half in and out of each other. Other patterns sometimes occur in my field of vision, but they’re more astral.