This is a place for the cool kids to hang out. If you are a cool kid and have some kind of random thought or inspiration it has magickal value and has magickal value to we chaos magicians. Let’s here what wired thing you thought of or some random song that came to mind, perhaps you randomly remembered something from your past like Zelda or Hightops. Share it with the other cool kids here in the Cool Kids Club!

Got another song magick related for the cool kids club.

Abrahadabra is a word that first publicly appeared in The Book of the Law (1904), the central sacred text of Thelema. Its author, Aleister Crowley, described it as “the Word of the Aeon, which signifieth The Great Work accomplished.”[1] This is in reference to his belief that the writing of Liber Legis (another name for “The Book of the Law”) heralded a new Aeon for mankind that was ruled by the god Ra-Hoor-Khuit (a form of Horus). Abrahadabra is, therefore, the “magical formula” of this new age. It is not to be confused with the Word of the Law of the Aeon, which is Thelema, meaning “Will”.

And some more. Abracadabra written in a triangular form as represented in Encyclopædia Britannica 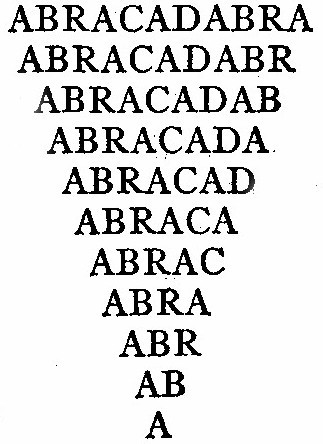 The first known mention of the word was in the third century AD in a book called Liber Medicinalis (sometimes known as De Medicina Praecepta Saluberrima) by Quintus Serenus Sammonicus,[4] physician to the Roman emperor Caracalla, who in chapter 51 prescribed that malaria[5] sufferers wear an amulet containing the word written in the form of a triangle,[6] or “abracadabrangle”:[7]

The power of the amulet, he explained, makes lethal diseases go away. Other Roman emperors, including Geta and Alexander Severus, were followers of the medical teachings of Serenus Sammonicus and may have used the incantation as well.[4]

It was used as a magical formula by the Gnostics of the sect of Basilides in invoking the aid of beneficent spirits against disease and misfortune.[8] It is found on Abraxas stones, which were worn as amulets. Subsequently, its use spread beyond the Gnostics.

The Puritan minister Increase Mather dismissed the word as bereft of power. Daniel Defoe also wrote dismissively about Londoners who posted the word on their doorways to ward off sickness during the Great Plague of London.[9] But Aleister Crowley regarded it as possessing great power; he said its true form is abrahadabra.[10]

The word is now commonly used as an incantation by stage magicians when performing a magic trick. It is also applied contemptuously to a conception or hypothesis purporting to be a simple solution of apparently insoluble phenomena.

All this was taken from. Wikipedia so that’s my source.

And now for the music ladies and gentlemen, I present to you the Steve Miller band Abracadabra!

How about this one Dr. Adam Thoth? It should ring a few

Or how about this!

Ok cool kids club I got another one for you truly listen to the lyrics and get into it… Experience!

See the shining soul break the ring pass not…