I am very interested to hear if any other forum members have had any experiences after watching this film.

I watched it a few days ago and afterwards as I tried to get to sleep I felt a definite evil presence around me.

I saw the spirit responsible while asleep. It appeared as young boy about 7 years old and dressed in a black suit. He had short straight black hair, a pale white face and pure black eyes. He had a slit like mouth and was grinning. He was radiating pure evil.

I did not feel free from this ‘evil’ influence until I got to my own home a day later and performed a banishing.

Can films like this act as a portal for spirits to enter our world?

What bad experiences have you had after watching this film or similar films?

It seems that I am not the only one to be affected by this. (See attached image) 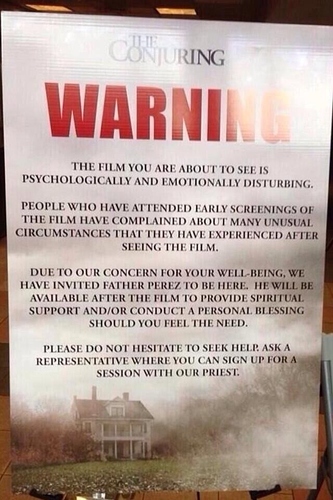 Not to sound like a smart ass, but are you sure it wasn’t just because you watched a horror movie? It’d be one thing to watch a documentary or comedy and have upsetting dreams, but nightmares are kind of what any decent horror director will aim for with his/her movies. And the only proof that sign offers is that advertisers aren’t getting any more clever (“Just keep telling yourself…it’s only a movie…it’s only a movie!”)

Of course, it’s entirely possible an astral nasty noticed you were afraid and decided to hang around, since they’re kind of dicks. I would say that is something that would happen in spite of the movie though, not because. Just my two cents as an avid horror fan, I’ve yet to see any spiritual ramifications to my habit. I’m glad a banishing took care of it for you, though!

Well, I’d advise against certain alien movies like the 4th kind as a good example.

I agree with Blacklamb and Frater A. It likely wasn’t the movie itself but something feeding on your fear.

Interesting, because, while I was watching the movie as well, I felt a presence who wanted to scare me and feed on my fear. My guess is that these kinds of movies create egregores using people’s fears. Meh, I did a banishing and it left.

I generally do not like horror movies. However I enjoyed this one.
By the time I got around to see this movie I had been working pretty heavy with some pretty dark stuff. I sat in the theater and smiled as I could feel the fear and unease of others radiating in the theater. True, working with demons makes you more demonic

I agree that there is probably nothing “in” the movie that is designed to hurt you, but it puts you in a state of unease and fear and from the perspective of the darker side you might as well be wearing a neon sign that reads “buffet”

Your humor always cracks me up.

May I ask why you bring up The Fourth Kind? The only reason I ask is that, believe it or not, that is one of the few horror movies that scared the shit out of me. I always just assumed it’s because the thought of alien abduction makes me nervous and it can’t be ruled out as a real life possibility. Gieger aliens are badass, but those fucking grays give me the creeps.

Thanks for your comments.

I will put this down to an ‘Astral nasty’ or as Elison stated, an eregore.

I’m 99% certain however that it was not just a series of nightmares as I’ve watched loads of horror films and never sensed anything like this before.

That movie was a piece of shit.

That movie was a piece of shit.

A funny piece of shit!

You’re right there. It was the most ludicrously dimwitted and clueless thing I’ve seen on a big screen. It was like something an eight-year-old made up on the spot. It’s funny that people want to be scared so badly that they just plug in their own fear at the mere verbal suggestion from an on-screen character that something spooky is happening. It’s also depressing because I love horror movies and nobody makes them for grown-ups anymore. In fact, the current target audience for horror movies seems to be “People who’ve never seen a movie before.”

While I saw the movie I like’d a lot, but because of the level of power that the witch had I thought “can someone achieve that level of power? can it be used in OBE or physicially?” It was motivating at the moment, tho my objectives changed.

The funny thing is I also felt a pressence trying to scare me, and in my mind’s eye looked exactly like the creepy doll that appears at the beigining. It happened a week after I saw the movie (I saw it like 4 or 5 times with different ppl or alone) and well all I did was to laugh at it and I imagine my self torturing the doll, it happened 2 times.

The fourth kind, it didn’t scared me, but I was having strong experiences dreaming with grey aliens and seeing them in OBE (or I hope it was OBE’s lol), but I know that happened due to a trauma I had after watchinig the movie “Intruders”, is about grey aliens stealing hybrid babies and they’re ugly as fuck, I hate them.

Giving a spirit attention draws it to you. Or, thinking about it makes it manifest astrally. And that’s exactly what this film does: it draws attention to this entity.

But, seriously, I hope this thing didn’t scare you. I’ve met some nasty buggers from the pits of Hell in my time, and the thing in that film is not even small fry. Humans can potentially go toe-to-toe with gods on the astral. You are so much more powerful than this sort of thing it’s not even funny.

The film didn’t scare me that much. But this astral ‘entity’ really did. I’m totally new to the occult arts and this is the first astral entity that Ive encountered. Just glad to be rid of it as the feeling I got from it was pure evil.

The film didn’t scare me that much. But this astral ‘entity’ really did. I’m totally new to the occult arts and this is the first astral entity that Ive encountered. Just glad to be rid of it as the feeling I got from it was pure evil.

This is why it’s good to have patrons. Ogun Feray, St George, Mithras, St Michael, ‘Belzebuth’, Thor … they’re all spirits who love a beer and kick ass.

Although some of those are the same spirit imho, but that’s another story …

In general, horror movies have a way of reflecting back to us those things inside of that scare us about ourselves. If we see something in a horror movie that causes us to feel like an “evil presence” lurking about, it is usually a reflection of something inside of us that is trying to get our attention. Does that mean that you have have something evil inside of you, NO! It means that our sub-consciousness is trying to get our attention. Why are you feeling this way exactly? What thoughts exactly are you having? These kinds of questions are things that provide a guideline of what you, yourself are trying to tell you.

I know that when this has happened to me after watching a horror movie, I began to ask myself those questions and discovered that I had certain fears that I needed to confront inside of myself. Once those fears were acknowledged, it left and I received much insight and even healing.

As for the movie itself, I felt that Hollywood took too many liberties and that left me feeling blah about the film. Example: Why they heck did they change Annabelle!? The real Annabelle with her Raggedy Anne appearance scared me a heck of a lot more than the dirty, beat up doll in the film. I also felt that the movie made Ed and Lorraine Warren look like a couple of fruitcakes than the interesting people they really are.

And yayyy! I do believe this is my first post on this site. I’ve been a lurker for a while now but this topic drew me out of the shadows.

Just finished watching The Conjuring. As a connoisseur of horror films, I can describe the movie in one word: boring. There was absolutely no suspense at all. There was no ritual, no ‘conjuring’ involved in the story so the title itself makes no sense. As far as horror movies go, it was abysmal. I felt nothing from this film.

I was going to rent it but will pass now, DK your just hard as fuck.

I’m glad you mentioned this flick, the 4th Kind, as I had a strange reaction to it. Obviously, these were not extraterrestrial beings, but instead were interdimensional beings… ancient sumerian gods that took possession of the main character. In the split-screen scenes, juxtaposing the cinematic representation with the actual footage, it gave me chills, and I was pretty creeped out when I left the theater.

Another one that impressed me was White Noise… specifically the scenes where you see the three darkmen not on the screen, but unseen to the actors in the living room, in mirrors, and outdoors.