The circle of transmutation of zahariel

THE CIRCLE OF TRANSMUTATION OF ZAHARIEL

I this post i’m going to share with you a Magickal Circle(Tool) that was given to me by the Archangel Zahariel in a unexpected way today, let me put you into context.

I had a pretty bad day today and as i came back from College, i needed to Channel that Anger, Hate etc… and being someone who actually mostly never Curse anyone(since i prefer Peaceful way to solve Conflicts and most of the time a good Binding and Banishing do the Job well) i had the urge to Curse.

As i arrived to my ‘‘Outdoor’’ ritual area, i was able to Feel Angelic Presence very strongly, then a Picture flashed in my Head and i hearded the Words, Draw this Picture in the sand and stand in the Center of it.

I was kind of Pushed to do it and so i drawn the Circle attached to this Thread on the Sand and standed in the Middle as indicated, i was very Angry, Confuse and full of Hate due to the events that happened today. But then i heard in my Head :

I stand in the Center of all Creation, as a Living Manifestation of Godhood, i call upon all the Angels of the Lord(yourself) to descend and answer my Plead, COME AND ANSWER MY CALL! Purify me and my Universe, Oh Mighty and Powerful Angel. SO IT IS DONE!
Then six Angelic Being descend in the 6 six pointed star of the Circle(around it) as Lightining Bolt, i was Hit by a Rush of Energy, my Chakra were all Stimulated and i nearly fell on the Ground due to the Intensity of it.

Then the Angel(Archangel) standing in front of me(Zahariel or also known as Zachariel) talked to me saying : ''By this Circle, all the Energy of your Subjective Universe, be it in the Microcosm and the Macrocosm will be Transmuted into Useful, Positive energy for you to use, No more Negativity, and unwanted energy shall assail you.

This Circle is an Alchemical Device to be used by anyone at anytime, i gave it to you, share it with the World.’’

Then those six angels started to send energy through their Six Pointed star, the Energy flowed through the Connecting Line to the Circle i was in and the Circle started to Glow and Shine and then i was Hited by a Vertical and Raising tunnel of Brilliant white Light that take all my Negative Energy and unwanted Energy and transmuted them it was pretty Intense.

After that Ritual, i feeled no more Angry, no more Confuse, in fact i was in state of Bliss and peacefulness. All around me, the Plant, the Tree, the sand, myself etc… Where much more Brighter and more Colorful.

So Basicly here a Little descirption of this Circle and how its Work,
The 6 Six pointed star(representing the Union of the Macrocosm and the Microcosm as well as the Number 6 representing Saturn, and the Universe in which we Live encompass the entire cosmos(your subjective univers) and by Evoking Angel into each of these Six Pointed star, they actually condense all the Energy of your subjective Universe into these Six Pointed stars, and send it to the Seven one(in the middle of the circle where you stand) Seven representing the Perfection of all things, the Harmony etc… all the Energy is transmuted.

The Writing around the Circle is supposed to be the name of the Archangel Zahariel written in a ancient Tongue with some Variation in his name as well, The Archangel Zahariel is known to be the One that bring the Judgment of the Lord(I interpret this as that he make Manifest your desire since we are the Lord).

He is an Angel of Healing as well and Chief of the Sun and the Earth, thus a Alchemical Formula can be seen here, the Earth representing the Universe being Purified by the Sun. The Judgment can also be seen as being the act that end all Negativity in yourself, your Life and Subjective Universe.

I hope this Circle will be Useful as it was for me and i’m looking to read the experience of those who will use it.

Wow!! Thank you for sharing this! !

My preference is not angels, but i do appreciate this mephistor. Any good tool like tgis is hekpful regardless of paradigm. I am getting some crazy things right now but i like this. The design is very well done and it is very well drawn by you. When any entity hands yiu sometging like this its always a wow moment. Im glad you are getting these messages bc it is a very special thing keep up the good work

My preference is not angels, but i do appreciate this mephistor. Any good tool like tgis is hekpful regardless of paradigm. I am getting some crazy things right now but i like this. The design is very well done and it is very well drawn by you. When any entity hands yiu sometging like this its always a wow moment. Im glad you are getting these messages bc it is a very special thing keep up the good work

I use the Hexagram as a similar concept, though with much more added. I however, do not add the extra star, but just use the hexagram. Sounds like you got something fairly important.

Can you please re-upload the picture?

I second that. It’s a damn shame to lose the image.

Mephistor hasn’t been on the forum since February of last year so I think the image might have gotten lost in the move to the new system. I wonder if there might be a way to retrieve the image?

Looks like it’s gone for good, sorry - it was uploaded to the old platform and can no longer be found in its old location.

Try dropping the OP a line via PM, he should get notifications of those to his e-mail address?

I tried the cached version of this page in Google and that had nothing, and the term is too common in gaming to find if he uploaded any other instances of it on a blog or other forum.

Thanks for checking, Lady Eva!

Can someone blind evoke zahariel with just his name and get the circle that way?

To be honest I think I want to go back to working with just angels and sum deities for a bit.

I’ll drop a PM to Mephistor. Thank you.

So after a long search i was able to find whose image on pinterest. Accordingly to the description this look like the circle.
Can anybody who saw the image before confirm this is it? 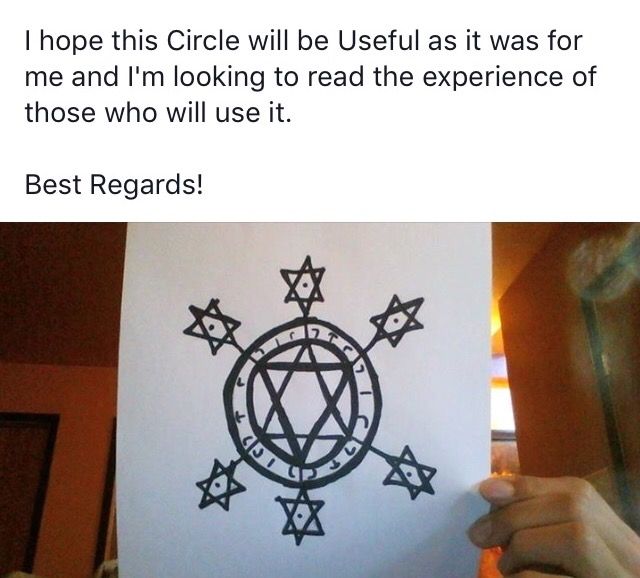