The Blessing of the Moon

The Blessing of the Moon

I’m going to describe them to you but it kind of complex. So imagine two people standing back to back, one in the form of a woman and the other in the form of a man. However they are not two separate bodies but rather one. I belive based on whatever system you believe in what the moon be a God or Goddess, that that is what they will appear as, but being clairecogniscent, I was able to see both forms as if right in front of both of them while at the same time still in my position in my physical body.
The “feminine” form wore a reflective chromium, selenite dress with silver heels and gold cuff links. Her skin glowed silver white light ( if anyone has seen Steven Universe and knows white diamond, very identical to her.) She had intense glowing eyes that are the purest white.
The other form of the moon Appeared as a man in a black suit, with glowing black skin. His mouth and eyes glowed white and his hair was made of pure shadow. I also picked up on the image that if He were the dominant form that I associated with the moon, he would appear with pale golden brown skin, with a silver pinstripe suit, made of the same material as Her dress, with Silver hair and pure glowing white eyes, with golden buttons.
I also got the message that they had a headress, but it was too high up for me to see. I channeled that the appearance also shifts with the phases, so that if either the “masculine” or “feminine” were your associated archetypes, that’s who would appear to you and the other form would be the shadow that you didn’t see but was still present, which represents the light and dark sides of the moon, their appearance shifting as the moon goes through their cycles.
Back to the story though. So after they appeared to me, the spoke on a private matter, and gave me a blessing and left. They also performed a miracle within the blessing, and left a gift. When they traveled through the mirror, they infused their energy within it. So with that came a few things. So the mirror has all the energies of the Moon’s cycle, so I don’t have to wait for a certain phase, they Energy is really available. Also the mirror is a powerful manifesting tool, and I’ve made many wishes upon it that manifested rather quickly. Also it contains the blessing of the Moon, so if when I do another consecration, I don’t need to summon their divine energy, it’s present whenever needed. The mirror also has powerful charging properties, and if I need to do a large scale spell, I’ll perform in front of the mirror, and the energies get applied with little effort on my part. They told as sort of a “condition” to their power, I must spread the tale of this meeting, which is what I’m doing here with you.
Take this information as you will I will add a picture of the mirror so that any energy readers /psychics /empaths, will be able to feel the energies for themselves. I’m going to lock the energies within the photo so that you won’t be able to use the energies, but if anyone wants to try this Energy out for themselves you can contact me. I will read your Energy and determine if you are, for the lack of better words, “worthy” to use the mirror. Spirit doesn’t lie and if you are far along your path to receive this blessings, your guides will speak to me. The moon is a pure energy, and, I believe, should not be corrupted with the energies of those who seek selfish gain at the expense of others. This is what They have made clear for me, so I shall carry it there wishes. 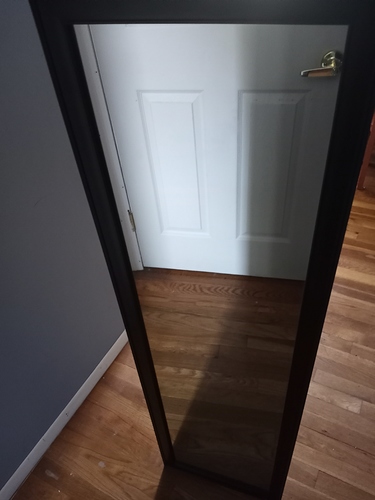