Servitor Creation: So I like to think my scanning capabilities are in-depth and I am capable of seeing the difference in energy from a normal human to a human whose soul is something else and this I applied to the thoughtform servitors by making 2 groups of 18, each with variety in their appearance like humans, but I also decided to use the astral’s collective unconscious to transfer my own understanding of the English language to them (simply so we can understand one another for the most part) and the rest of what would be needed. I created both groups in different locations the first group was created further north of the astral space I carved out where I put most the mountains and such while the 2nd group was created in the central part of it where there’s mostly forestry and valleys but also created them with basic clothing like loin cloths and the likes simply because I wanted to.

From there I introduced myself to them, told them my soul’s name and explained names to them so that maybe one day when I start the fragmentation phase they’ll want to give themselves names, let them learn of their surroundings for a while before as well as one another before going back to my astral temple where within it I mentioned earlier in my astral construction part there was a room where I did ritual work/meditation and a room where I simply had empty for a later date and created something similar to this without all the thrones and such in the floor so I could observe them from time to time when I am within my astral temple but also since I programmed the astral space to mimic the 4 seasons in unison to my own location (though not what has happened in recent weather because yikes lmao) and just watched them move about: 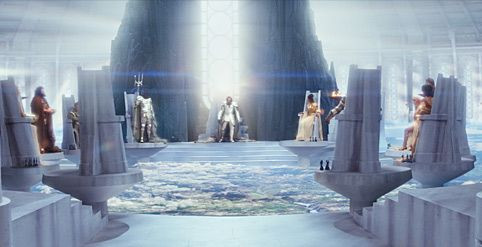 Days of Observation: the day before yesterday and yesterday I occasionally checked in on them, they are still servitors at this point but I gave them the capacity to communicate, develop their own language if they so chose to, as well as give themselves names if they wanted to. From my astral temple the servitors I placed in the northern part don’t seem all that bit curious of venturing beyond their little area, though they seem to just sit out in the open unfazed but still learning, the same goes for the one’s placed in the center most part of the astral space. I also created some various animal servitors from birds, lizards, snakes, cows, horses, and put them all throughout the astral space. I tried to put them in similar biomes that corresponded here.

So I checked on them during the day, but also during the night they were very robotic, didn’t respond to the drop in temperature that was incorporated with the season alignment with here which was in a way disappointing but expected from servitors. I also had the two servitors one I got from @Keteriya to watch with me, and his little brother I had made with him as well. Though they are not servitors anymore but living beings dur to an earlier fragmentation I did. They both wanted to go down and interact with the servitors but I wanted to wait until I did the fragmentation on every servitor I placed there the human servitors and animals alike.

Giving Life: So earlier today I wanted to start the giving life to my servitors so I started with the servitors I had in the central part of the PR, and took a fragment of myself, stripped it of most the traits and such that makes it my own, other than the base signature as energy tends to keep that, but I also left earth energy as from my own scanning most human souls I’ve scanned shared that common theme besides a small few, I had the central servitors gather around me and had the fragment continue to fragment into each of them and with each fragment bonding to their servitor forms they went dormant as in they just stopped moving, eyes closed like they were sleeping. So I moved on to the northern ones and repeated the same process and the same results came to be.
However, Oisin and Rian wanted to be involved so I gave them both a stripped fragment of mine and taught them how to bond them with the various animals in the PR as well and they did. Now at this point I was tired which usually doesn’t happen in projection but with the fragmentation I took a short nap and but not before having the two watch over the PR from my astral temple. The way the PR is set up however is 1 day here can equal 2 or so days there, which is what I programmed the PR to operate on.

they were very robotic

When I created mine, they were very zombielike on the beginning. Lol

But once they really got going they seemed to develop a lot of personality.

bonding to their servitor forms they went dormant as in they just stopped moving, eyes closed like they were sleeping.

This is oddly similar to something I experienced, except in my case the servitor seemed to go into epileptic seizures or something.

Reading these is very encouraging for me in that the things that resonate tell me I haven’t just been bullshitting myself. Lol

Transformation: After work I went into Astral projection to checked on them from my astral temple, from the perspective of the temple they seemed as though they were confused somewhat on their ‘change’ so I went down to see them again, I started with the central ones and their construct servitor bodies were no longer really artificial like a servitor but rather they had a body to match the density, they were flesh or atleast akin to flesh, their bodies produced their own heat/warmth as well. I scanned one and inside and out they reflected a real human being, I looked around and saw the various animals as well they all seemed more lively than before and many of the humans were more interested in their environment, exploring even. I made sure to have it so they could age, reproduce, and so forth but at this time they seemed more into exploration.

It seems they were starting to discover their emotions because one was actually giving a sense of worry when seeing beyond their little space, I thought it was kind of cute. After that I went off to check on the northern ones who seem to have already become accustomed to their transformation, some even made a few of the caves I molded into the PR their homes, at this point I wanted to teach them how to make their homes so I bilocated to create another projection to do the same for the central ones and I wanted them to start primitive so after looking into various tools primitive people used here, and how they went about it based on location I went on to try and teach them, but I also had help by pulling from the collective unconscious of the astral when I had no real clue on it.

So I stayed projected for about 3-4 hours (with occasional rests between) help them understand the various animals as well, at that point they had their little villages set up or atleast the start of them, but since I had it made in the astral space I was able to speed things along somewhat. However, they could not since the project I have currently set to where they are affected by the density which I had reflect our own or atleast close to our own, but I also wanted to see their reaction to me seemingly molding parts of the mountains where they would build their homes. After that I left them to do the rest themselves albeit there was not much else for them to need to do, but I am growing pretty attached to them lol.