Hey folks, so on a lark this morning I decided to try tea reading, (maybe this will be something I’m good at; nope!) And I just have no idea what I’m looking at. Mainly curious of general things to look for. I’d read about anchors and dogs and such showing up but I’m just not seeing any of that. So, share tips, tricks, success stories or whatever.
Theeeeenks.

Here’s a snap of the cup, if anyone cares to point me in a direction. 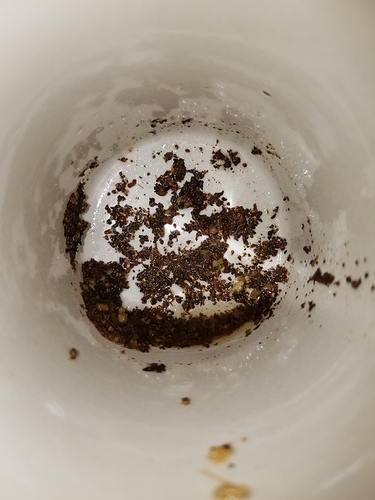 Also, if someone wanted to do a whole mess of readings for people feel free to hijack the thread. I don’t mind!

Following as this has also been a current interest of mine. Still fairly new at it so I cannot really add much to this my friend.

Bookmarked will reply later with some minor insights of mine which I’ve gained throughout the last three years.

Looking forward to it.

Tea reading is very personal and you will rarely get perfect images. You know how when you stare at a carpet, or textured ceiling absent mindedly an you start to see patterns and pictures that’s aren’t exactly there? Its kind of like that.

Hi there. I mentioned I’d get back to you. Banjax already gave a pretty good rule of thumb for this to quote him:

Tea reading is very personal and you will rarely get perfect images. You know how when you stare at a carpet

Yes, that’s pretty much it, as tasseomancy is very much a intuitive process along with identifying patterns, as in not trying to think about the pattern or rather trying to find it. But instead you more or less have to let go and see what catches your eye, if you get like a flash or inspiration where pretty much an image jump at you for example I saw a fly in your photo above. That’s what you’ll go for.

In conclusion for successful tasseomancy readings according to me hinges upon this;

Note: if you are trying to look for something then you are not accessing you intuition which is exactly what tasseomancy begings to do helping you tapping into that part of your omniscience, and it acts like a bridge to things like scrying for example.

Well. I’ll have to try again another time, without actually trying I guess? Fuck, divination is so goofy to me. I just cannot seem to work my mind into the right spot for it.

Try again @Painon it takes a little while to temporarily get away from the analytical part of your mind for at least during the moment when you do a reading.

To help this process along - I wonder something, have you ever like been stuck at a problem only to go away for a time and then the answer comes to you once you’ve let the idea go?

It’s similar thing here, have the question in mind when spinning the cup. Then once you stop hold it at a 45 degree angle. And then lightly gaze into the cup and whatever jumps at you first, that’s it. You’ll know what it is when you see it so to speak.

The downside with this method is that it’d really vauge, it’d s good idea to add another type of divination to complement tasseomancy readings according to me.

Hmm. Well in that cup the first thing I saw was a dog or wolf. Either one I guess. And the handle of the cup is at the bottom of the picture I took.
Also a fly in the negative space in the middle.
Maybe a bird to the left.

I see two different faces, diagonally both to the right and left in the middle of the cup. Also the shape of a star, almost a pentagram made of the leaves around them.

To help this process along - I wonder something, have you ever like been stuck at a problem only to go away for a time and then the answer comes to you once you’ve let the idea go?

Haha, well a very English thing to do when stuck with a problem is to just stop for a little while … and have a cup of tea !! Lol.
Then return to whatever it is with a fresh mind, and like Teras said, an answer often comes.

Do you ride motorbikes or anything alike?

Nope. I drive a lot of power equipment at work. (Warehouse) and a few have grips like motorcycles however.

I am not advanced at these things however many grandmothers around my area could definitely give the actual reading as they’ve done it their whole lives.

I see multiple things.
A pram
A knight riding the horse like a chariot because if You look at the top it’s a man with a helmet plate lunging forward on a horse or some shit.
Looks like you are moving forward or may clash with confrontation in the future.

A guy I’ve worked with for years started talking to me about magic and whatnot earlier. We’ve talked for like 3 solid hours. It’s been pretty cool honestly. Never expected him to know about these sort of things. He doesn’t practice, just reads.

@Painon Sleipner carrying the dead to the Otherworld. Honestly have no idea if that means anything to you but its what I see and to me its clear. @Whitehowlite has the same in mind I believe. This is what I see 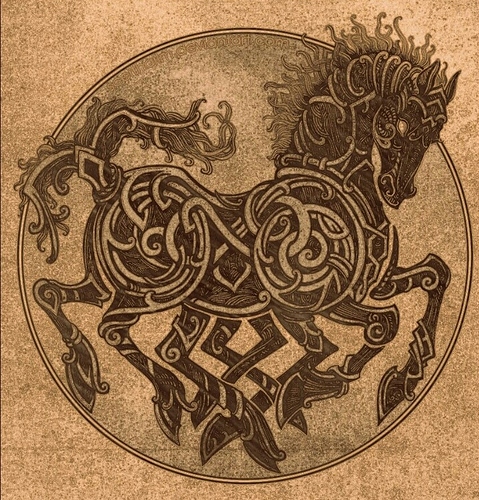 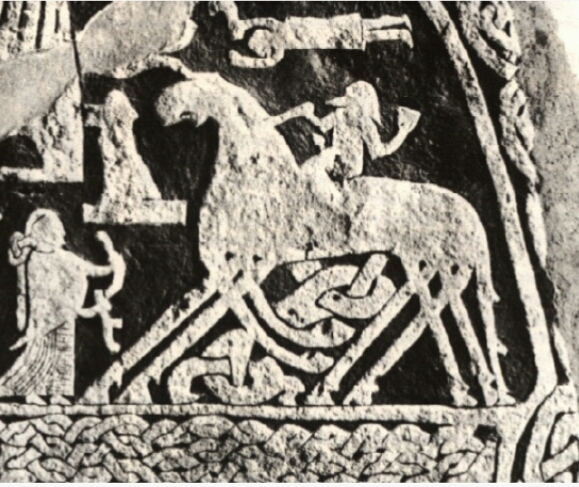 Cool, that’s something I don’t know about.
I get to learn!

@Painon in addition my post above I also see a ship in the sea. I don’r however get how the others aee Sleipnr that’s pretty fascinating. At any rate good luck in your work. 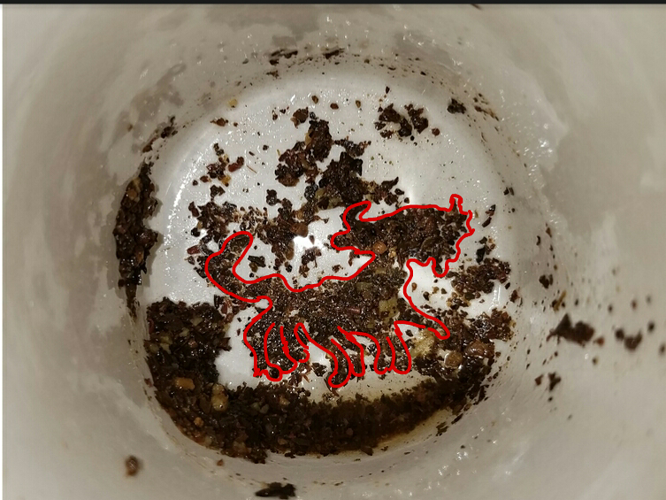 That’s what I was thinking was a dog.
Didnt know about sleipnir so I couldn’t see it.

@Painon Its a very interesting cup of tea! And it is heavily Norse influenced.

I see the ship at sea that @Teras390 was speaking about and it is a Viking longship with stempost, keel, sternpost, hull, sail and even the figurehead are all clearly visible.

The star symbol that @CovertCreator spoke of is visible upper left and also both faces.

There is so much happening above Sleipner as well! See the woman holding an object in her left hand? She’s turned as if floating above. There are several other figures there with her including a rather tall man to her right and a smaller creature to her left which seems to be reaching for her.

Not sure if anyone else sees the runes.