How many here have summoned an entity to full manifestation? 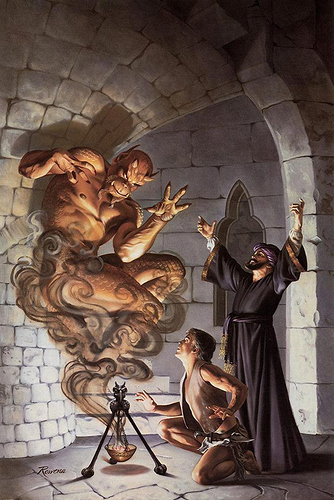 Okay I’ll make easy for you.

Interesting poll I have wondered the same to be honest. Cool pic as well. I personally voted no. Although they have without question made there presence known- . Someone is gonna say it anyways so I’ll drop it without saying it. It is of no concern to me personally- I am concerned with results- which have yielded otherwise I wouldn’t bother by know- although I am still waiting for that leprechaun to knock on my door with $1,000,000 gold pot.

I summoned to physical appearance, but the being did not speak nor touch us, so I am unsure if you’d count it. Two of us saw him looking at us.

Thank you for the honest answer much appreciated.

I’m just curious, what kind of feelings do experience while evoking?

I summoned to physical appearance, but the being did not speak nor touch us, so I am unsure if you’d count it. Two of us saw him looking at us.

I’d count that, for one. What method did you use to accomplish this?

How many here have summoned an entity to full manifestation?

Similar question; what method did you use to summon to full manifestation?

On accident. 3 times. The same entity. The first time was I guess you could say a “hi? How are ya? You wouldn’t mind if I stick around for a bit, would ya?”

Now, I’m either flat out possessed by her or she gave me a little bit of her energy and said “there ya go”. Not sure which yet.

I can’t even hardly do a proper 20 minute meditation, so no way I could see her on purpose. Only by surprise do I get to see her.

My skill set is weak but we’ll get there.

It happened several times with different senses. I was in full normal awake state, no TGS or alpha or Gnosis.

I experienced touches for few minutes, as far as I can remember, it was Lilith. I had a visitation once by Satan, he was angry at that time because I was stupid enough to be yelling and commanding, no clue what I was doing, I just wanted to contact him for very important problem… I had audio recorder running, didn’t hear anything with my own ears but when I played the recorded audio he was there, loud and clear. I will never forget his voice all my life. He started with a very strong female voice, then while he was talking the voice changed to demonic male voice!!! It was weird, scary but I was extremely happy that he answered me.

Another time I was communicating with couple of spirits for few months by EVP audio recordeing, one day we had very intense argument about religion - they’re extremely religious - and the night ended with one of them screaming at me… very loud commanding voice that I heard very clearly with my own ears.

I also communicated with Death. Death himself and Santisima Muerte. I don’t know if it’s known or not, but they’re not the same thing. Death’s voice is terrifying… it gets under your skin, it touches your bones… you feel every cell of your body vibrating with each letter of his words. Santisima Muerte told me she’s not death, she’s his spirit, something like an Angel but not in a biblical sense. All those communications were made by audio recorders.

I didn’t witness full body manifestation myself… my brother did. It was weekend and we all were together in the house. After everyone went to sleep, I was communicating with a spirit in the living room and while I could hear the voice in my audio recorder, he saw the spirit right next to his bed in his bed room upstairs, standing and looking-staring at him… scared him to death, that was a long night LOL

Only lately - after joining BALG - that I started to communicate with spirits for magick… before that I was only talking. I love being around them, feel them, and have conversations with them. Honestly, I really don’t need their help with magick, I know how to do that already, I just wanted to learn and understand how it’s done. My main goal with spirit communication is to have a connection with them. It’s amazing experience !

The above examples cover what I witnessed during this year alone. I’m doing that almost all my life.

Thank you for the honest answer much appreciated.

I’m just curious, what kind of feelings do experience while evoking?

It is almost subjective to me. For example baneful intent- to me the air in the room grew thick and almost oppressive if you will. But like I said almost subject to intent- does one expect “the author of bloodshed and manslaghter” to show up and bring you roses? Probably not. I can say that for whatever reason KING Paimon for whatever reason made me nauseous for almost entire rest of day and I rarely get sick. So much so I posted about it wondering if anyone else had similar experiences. Not sure the correlation there but that was an example of experience

do you have those recordings?

Yes I think I have them somewhere, they’re not for publishing or sharing unfortunately because those sessions include private-personal information about other people not only myself.

At one point I developed very heightened senses as a result of meditating 7-9 hours each day and could hear spirits clearly, even see them as bright flashes of light moving around. But the problem began when while going to sleep I would hear loud screams in my ears, mainly when I am half asleep.

Finally I said fuck it, I don’t need this bullshit and decided to sacrifice my potential 3rd eye opening/ heightened senses in exchange of sound sleep. And I started doing banishing/grounding ritual everyday and as a result of that now it is gone.