I’ve always been drawn to her for years. It’s been a tango in my head. I kept telling myself that I wasn’t ready, that I would work with her eventually when I had the time an dedication and then I completely forgot about it.

That was until I started to watch American Horror Story. Season 3, coven is set in New Orleans Louisiana and guess who shows up? You guessed it, the queen of Louisianan voodoo herself. Marie Laveau.

Ever since then I was driven by something to research more into her. I read everything I could about her. I immersed myself into her fully, perhaps having intuitively known that I would work with her soon.

I began to hear her voice at random times during the day, telling me things that I didn’t find in my research but my research hinted about. Details that I later found out upon more research.

I knew I had to summon her but I didn’t have the time and that’s when the headaches started. It grew more intense last night when I decided to contact her. Finally made my decision and told my friend @C.Kendall about it and I finally decided to go with it.

I gathered
haematite bloodstone,
Selenite
A white candle
Glass of water
Three gifts for each of the three spirits I summoned
And their veves as well.

(If you look at the video closely, in the flames you can see a face )

And as soon as it came on and I started dancing, the flame of my candle began to flicker wildly.
I remembered some of the tribal dances I had seen from my mothers people and as I began to call on my ancestors my body started to move and began dancing in ways that I haven’t seen in years. Traditional dances that I had only watched as a child. I was replicating them.

It was so instinctual, it was like I KNEW exactly how to move. I danced and danced and fell into trance, I called on my ancestors and I could see them in the realm beyond drumming for me in a circle. I could feel the flames of the bon fire.
I wore white for the ritual and I was in white in my vision as well. I then proceeded to call legba, I sang to him in his native tongue and scried into his veve. Then I felt his presence, his older paternal figure filled my room and I knew exactly what EA meant by saying once the loas come it’s unmistakable.

I could fee him and see him almost physically in the air beside me and in my vision. I offered him a gift, kolanut and some old keys I found. I asked him to open the crossroads for me that I may call on who I needed to call. And he agreed then smiled and said that my ancestors were happy with me.

I then moved on and continued to dance and called on the Baron, Prince of the Ghede, the dead, Baron Samedi. My body began to twist like a snake, I began to feel an itch spreading across my neck, inner thighs and my body. I began to feel real hot and I started to get a headache. I knew what was happened and I suspected it would, I was being mounted by a loa. And I welcomed it.

Baron Samedi took me to his realm and he open the gates for who I wanted to speak with. He allowed her passage and I thanked him for it then offered him his gift. A skull

from a magic box I found, that glows in the dark.

He left me with the spirit and then I began to dance again, forward and backward sensations wrecked through my body as I scried into her picture and summoned her. Marie Laveau, Voodoo Queen of New Orleans.

She came and she looked just like I visualized. A beautiful woman with a headwrap made from African print designs, and piercing eyes. She circled me and then told me to blow out my candle and bask in my eternal darkness, that she wished to bestow upon me a gift. I did.

I felt her come up to me and kissed me on the forehead, on my third eye. She said she would teach me and I said I was ready.

“I will make you a Grand Houngan” she said.

After that she smiled and then left, I closed the ritual and thanked Legba, he said that I now had a closer connection to my ancestors now that I honored them.

I smiled. Then proceeded to check the time and realized that what I intended to be a simple summoning ended up taking over an hour. Whoops

Edit: @Lady_Eva I know exactly what to do now for the project

For those of you wondering where I learnt how to dance

Edit: @Lady_Eva I know exactly what to do now for the project

This is so awesone, you made my morning!

Thanks for sharing this, what a great start to an amazing day!

Aw thank you so much! I’m so excited to see what the day has planned !

This is wonderful! I absolute love Marie Laveau, a true queen

This was an amazing read, Marie Laveau The Queen of New Orleans, has always caught my eyes from the very first moment I came across her. Please do keep us updated on your experience with her.

I knew you could do it brother.

the more I read about her and her influence and the people that knew her, the more fascinated I am by her.

@Becomeagod thank you I will !

Girl you go ahead.

Good to see this…

I’ve been feel a draw to but not from Marie but to the path of voodoo and I’m curious as to who it is calling out to me and I don’t know much about voodoo since I’ve never specialized in it and I wanted to know where a good starting spot might be. I am going to do more research but if anyone knows anything on who a good starting point might be I would be interested in researching and working with them.

Loved reading this post, I have recently just bought this after Marie Laveau turned up in a dream 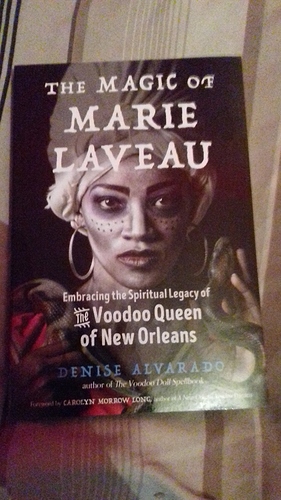