Are there any books/grimoires that predate the zodiac?

I’ve seen people here well versed in Zoroastrian LHP and was wondering how the magi utilized the stars in their practice.

Zoroastrian? You caught my attention. I am interested in zoroastrian magic. Need to learn about it to "beat up my enemy with their own tools.

well there a good book on babylonian star lore. 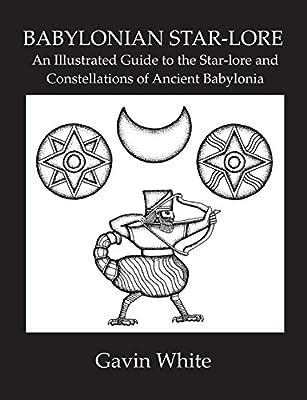 Today our most obvious link to the ancient cultures of Babylonia is through the twelve constellations that make up the zodiac. The zodiac is, however, but a part of a much larger system of star-lore t ...

If you’re wanting something along those lines, @Sabina, you really should check out Kurtis Joseph’s “Black Magick of Ahriman”.

I’m working my way through it right now. It’s very much embodies the adversarial force to Ahura Mazda and the religious control systems still in place today.

I’ve seen people here well versed in Zoroastrian LHP and was wondering how the magi utilized the stars in their practice.[/quote]

The Egyptians realised that the annual rise of the star Sirius above the horizon at night came just before the inundantion of the Nile, and tracking this dates back to the start of their civilsation, since the annual inundation was the primary source of water for agriculture in that country.

The entire Middle East has the perfect climatic conditions for star-watching (unlike northern climes with cloudy night skies), and the link between Sirius, and isis, whose tears were believed to cause the inundation, may go back to 3000BCE. (3)

Stone circles were appearing in Europe and the middle east even earlier, dating back as far as 4600BCE, and they were often aligned to show the rise and set position of the Sun at various times, such as the Summer Solsitce or Equinoxes, which had a life-or-deatn significance back then, relating to changes in the weather and the availability of food, correct times to harvest or hunt, etc. (4)

Nabta Playa, south of Cairo, may be the single oldest stone circle with links to astral bodies:

By the 5th millennium BC these peoples had fashioned what may be among the world’s earliest known archeoastronomical devices (roughly contemporary to the Goseck circle in Germany and the Mnajdra megalithic temple complex in Malta). These include alignments of stones that may have indicated the rising of certain stars and a “calendar circle” that indicates the approximate direction of summer solstice sunrise. “Calendar circle” may be a misnomer as the spaces between the pairs of stones in the gates are a bit too wide, and the distances between the gates are too short for accurate calendar measurements." An inventory of Egyptian archaeoastronomical sites for the UNESCO World Heritage Convention evaluated Nabta Playa as having "hypothetical solar and stellar alignments."
Nabta Playa, Wikipedia

To get less academic, it’s my belief that these early circles represented the microcosm of the universe and that the operators used them to “evoke omnipotence” at significant times of the year - perhaps wearing masks or regalia to merge with a god or nature force (like animals, especially prey or ferocious animals)

This use of masks is recorded further back still in cave art, with humans wearing animals masks, and this is how children often think - the to act like something is to temporarily become it, and that what you believe affects reality (instead of the “rational” modern adult version, which inverts that creative act). (5)

To understand the meaning of the motions of the stars, Sun, and Moon, placed someone at a significant advantage in the era before digital watches

and the deeper magickal significances of, and also interactions with spirits connected to, the astral bodies could have been a sgnificant source of wisdom for those gifted with the skill and leisure to study them.

Edit to add: regarding the LHP thing, and a philosophy of escaping the “clockwork reality” of law and order, which was a concept that’s come up for me when working with Ahriman, there is an hermetic concept of shedding the “7 Bodies” linked to the 7 classical planets - I’ve explored this not with a view to merging back to “God” or entering some heavenly “unfallen” state, but simply to understand how the 7 classical planets affect us and keep us bound, and subject to forces of various natural laws - which have their place, but are chains on ascent when accepted as the highest law.

This article explains the concept fully: The Seven Bodies Of Man In Hermetic Astrology.

From an anthropology of religion course I took among other courses in college, the earliest religion found was evidence of worshipping a bear.
Shamans (earliest) were probably not as educated on star systems as the Egyptians and Middle East country magicians.
The picatrix is a fair book on star magic, and the ONA has documents on causal and acausal work, which I thought was associated with star systems.

One technique I know of for using the stars involves picking specific stars and energy breathing in the light from that specific star, while meditating on it’s name, until one is “charged up” with the star’s energy. For example, Betelgeuse is a very positive star to work with, I have had no problems.

" BETELGEUSE - [28 degrees of Gemini]
This is one of the most fortunate of fixed stars and is frequently prominent in the charts of those who have had major success in life . Betelgeuse brings wealth, honors, fame and fortune." -JOS website

Tonight I was looking up and noticed Betelgeuse for whatever reason: I wouldn’t have classified it as particularly vibrant tonight, yet I did notice it, and was moved enough to read-up on it, which to me signifies something.

Valerie Worth it seems had some star-related charms in some of her grimoires, Betelgeuse ranking in a few of them. Maybe ‘A Crone’s Book of Charms and Spells’ or possibly the one on talismans; I’ve neither anymore or I’d be able to give a more accurate reference.