Something on my arm

Has anyone ever experienced the feeling of energy coiling around their forearm after doing a ritual? ‘Cause I did one recently, and it feels like there’s a giant hand grabbing me. The sensation has been happening for the past few days. It’s interesting to say the least.

are oft the beings of Lilith and Gamaliel

Interesting. I haven’t worked with these beings before (though I have met Lilith a couple of times). Why would they show up after my ritual?

Sounds sorta weird to me like somthing you don’t want, but that’s just me could you tell if it took any energy from you like did you feel normal again right after the ritual?

If you have a pendulum I’d ask if there friendly or not.

I don’t have a pendulum, but it did take some sort of energy from me but I felt fine again afterwards.

Hmm I dunno sorta sketchy that you can tell it’s taking energy, like your surplus but just being nice about how it does it so no negative feeling.

Hmm I tried to scan you to see it type thing sorry didn’t ask and just seen arm then a small animal between cat and dog size and I asked is it nice and it started bearing teeth at me. The image doesn’t add up with what you’ve seen since it had a hand but yea. I tried again and seen a tentacle like wrap around your arm then pull you in then it went on your head.

Might just be my mind or sonthing else messing with me but yea I don’t have a good feeling about what ever is doing this to you.

Hmm weird as fuck I tried imaging it as a hand then seen energy moving from you to it ondered what type and seen a heart then it just went back and forth between you too.

So yea definitely have someone else give a scan towards it im not getting the best view of it. But I did picture your arm again and yes the animal thing was snuggle on your arm then bears teeth at me. But I know my vision must be fucked off sonthing messing with me or sonthing because I started to see you then you turned into a all black demon looking devil with large wings it was pleasent to see but im pretty sure that’s not in allighnment for you.

That’s… certainly quite the scan. I don’t sense anything malicious from it, unless that’s what it wants me to think?

Hmmm… I took a picture of my arm and I’ll leave it up if anyone wants to try their hand at scanning. Otherwise, maybe I should banish just to be safe (did so prior to the ritual, but you never know). 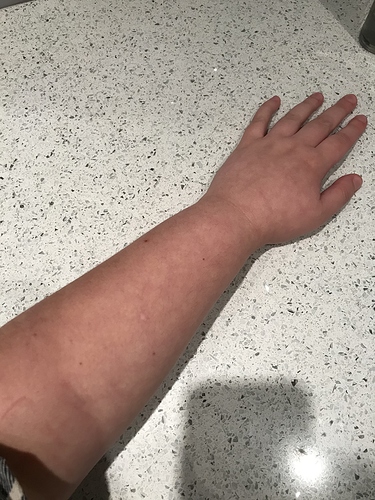 Once in a while I feel like someone is grabbing my left forearm. I also get a feeling of a bracelet or even a hand around my left wrist.

As of right not I am not seeing anything you don’t want. I did peek your ritual or such not my business, but I believe that feeling has to do with what the ritual was. I believe it was your answer and how the one you are working with will get your attention.