So I got something crazy at Goodwill today 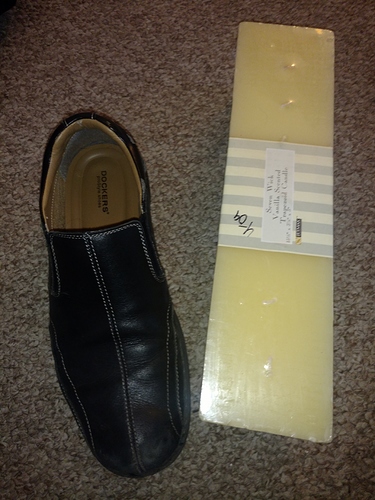 I got a giant fucking candle. It has seven wicks, and bigger than my size thirteen shoe.

When I saw it on the shelf, I knew it would be really awesome to use. It is vanilla scented, but that doesn’t matter because I happen to like the scent of vanilla.

I’ll have to plan something really special for it. Maybe something planetary… It really depends on how long each wick burns for.

I also got a candle-holder that looks like a small cauldron. It should be good as a bowl/burning dish for other rites and rituals.

Pro-tip - lookup if there’s an optimum way to burn it.

I didn’t realise until recently that a pillar candle needs to be burned on the first use until the entire top surface has liquified.

This is called the “memory burn” and if it’s extinguished before the full area is melted, future lightings will only melt within the radius of the first burn’s melted wax, meaning the candle will burn down very quickly, and also tunnel down inside itself.

Although some shell of wax looks attractive, it shortens the life of the candle and reaches a point where you either have to cut the wax surround, leaving ugly jagged edges, or accept that it will not burn evenly and completely.

I imagine there may be a similar thing for multi-wick candles, possibly doing that first memory burn until each wick has the largest possible circle of melted wax possible, without them meeting (or maybe they have to meet and join up) - i think you will be rewarded by checking this out, though.

I’ll probably do a memory burn before I start any rites with it, most likely during the initial consecration of it.