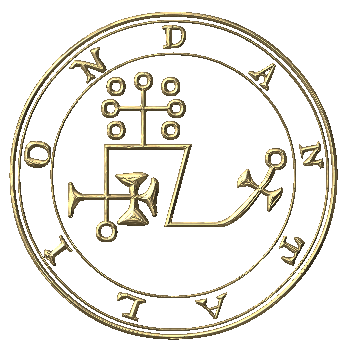 I have a brass vessel I use as a “housing” for Dantalion. She has not been respnsive but she did do my last request so here is triubte. Also, i would like to share my experiences and if anyone can link me to a “proper evocation,” i would greatly appreciate it.

I first worked with Dantalion a year ago. I asked for charisma at an event.

I used the method from Corwin Hargrove’s Magick of Influence. If you have not read it, it’s a very simple evocation that involves using angels to call forth the daemon (I’m not sure how well that sits with Daemonaloters but the word “bind” is not included.) The three times i said her name, the chain on my lamp behind me moved so I took it as she was being responsive. The spell worked in an indirect way but my work did become popular really fast and Dantalion kept popping up so i decided to have her almost as a patron or friendly spirit.

After my first working, I did not banish. I did spend the nite with someone and they told me they had really bad nitemares, indicating to me that Dantalion was still around. My second work was scrying on a sigil made from my blood and smeared with my partner’s sex juices. Nothing too revealing but the aforementioned person reported being attacked by some spirit who tried to possess their body.

The third working was the basic evocation laod out in Adam Blackthorn’s Master Works of Chaos Magick and a candle with sigil. We asked for am investor to get off their ass and invest in us as well as to reveal our enemies to us by making them sick in our presence. And guess what? The same person Dantalion messed with before (my then roomate at the time) came home “hungover” for three days. The roomate left in a way that devastated my business so it wasn’t exactly what I asked for, but that’s part of being careful with how and what you ask, so the blame is definitely also mine.

Hopefully Dantalion will be more responsive after this.