Its been a long while since I posted here as I was figuring out things on my path as well as struggling with a few issues in my life that have finally gotten significantly better and taught me a lot about myself.

I have been building a relationship with a particular Hindu folk deity called ‘Sada Muniandy’ for the past 1-2 months. He is said to be an aspect of Shiva and originated from Shiva’s hair itself, hence part of his name contains ‘Sada’ which means dreadlocks in the Indian language Tamil.

He is not of Vedic origin and belongs to a class of deities venerated in folk religion in South India and to this day there are temples for him in India and other parts of the world, e.g Malaysia, where rituals are conducted in a non-vedic style with channelling ceremonies being held where he’s said to ‘possess’ the channel and solve the problems of his devotees.

There are various types of ‘Muniandis’ and ‘Sada Muniandy’ is one of them and each of them have their own histories, temperament and worship/rituals. Examples of other popular Muniandis would be, ‘Raja Muniandy’, ’ Pandi Muniandy’ and ‘Dharma Muniandy’.

Also, Muniandy is know as Muneeswaran (which essentially means a sage originating from Shiva)

I started forming a relationship with Sada Muniandy in particular as he helped me greatly and looked out for me, when I was struggling with alcoholism and pill addiction. I have been drawn strongly towards Hindu folk deities for the past 2 years as the more I did research on them, the more apparent it became how ‘close’ they were to our realm and could manifest with greater ease to communicate with devotees and assist them with their problems.

Now I am not satisfied with ‘mere’ worship as I feel these ancient spirits have a lot more to teach humans then they are given credit for.

To connect with Sada Muniandy, I utilize EA’s Living Imagination exercise from the Mastering Evocation course to construct a form for him and then chant his name using a 108 bead rudraksha mala several times and the more I chant, I can feel myself dropping into the state.

I have been sober and clean from pills and booze for a month and this is the longest I have been clean without having regular thoughts of using/drinking. I used to go to AA & NA but honestly find this to be personally way more effective and powerful in my path.

I know this whole post seems jumbled up and messy, but just wanted to put it out so that others may benefit from building a relationship with this spirit.

Articles that I found helpful (NOT written by me): https://www.facebook.com/TheDivineJourney1/posts/the-mystery-of-muneeswaran-who-is-he-what-do-you-guys-think-of-the-following-sto/638738289488885/ 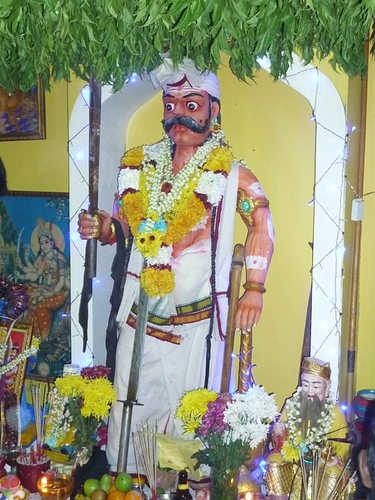 A statue of Muniandy.

Thanks for sharing @Pazuzu

Thank you so very much for sharing and I’m happy to hear you’ve been victorious in your battle against addiction. I’ve struggled with alcoholism myself.

Where would one find more resources on Hindu folk deities? I’m fascinated…

Do note that these books are written by researchers hence there are few practical actions to implement but they give us a good idea and clearer picture on how these deities have been venerated.

I’ll have to check them out. I don’t mind that they are academic.