I put together an anointed reversal candle said what I needed to say and lit it. 15-20 minutes later it put itself out and when it finished cooling off, I noticed weird shit in it. First, the wick is completely gone. Second, I’ve never had a candle do a fractured glass pattern. Third, there’s a star pattern where the wick was. Also, where I circled there’s an image of something staring right back like a spirit making itself known and odd how the bubble is centered in its head like a 3rd eye. I also noticed from the right side it looks like a dead ram is chasing a serpentine energy. But, on the left a turtle foot is stomping it. At the top of the candle it feels like light bursting through clouds.

I’ve never saw this much stuff in a candle I usually just see blobs or nothing. Also, this was a black votive so it turning grey is beyond me. 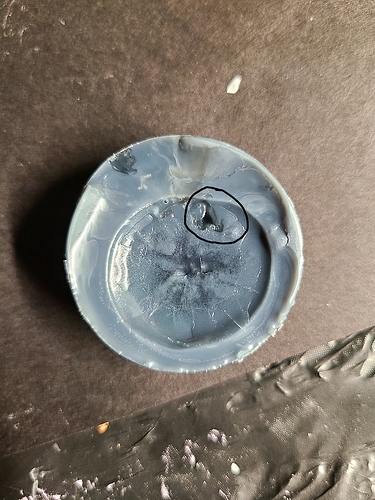 Nvm disregard me, you said it was a black votive. Strange that it burned that fast, unless it’s not well made though. Fast is usually a sign of the request is going to go well, but that fast is a bit unusual, most votives will burn 2-4 hours minimum, unless the wick is the wrong size for the candle.

The way the color is made for black, you’ll see everything from grays- to purple afterwards, it depends on how they mixed the color, and if it was solid or not.

I’ve used this type/brand before and never had a wick issue and you’re spot on with the 2-4 hour burn time. The candle didn’t even fully melt it just did what it did and that was that lol. It was definitely solid black I’ve gone through 2 six packs and this is the only one I’ve used that did the whole color change bit let alone all the other stuff. It’s also the only one out of all 12 I’ve used for ritual purposes…