I’m familiar with remote viewing, have heard Major Ed Dames talk about it for countless hours on a radio show going back 18 years but I never tried it until today.

I typed in “remote viewing test” and a good number of webpages came up, I tried 2 tests from 2 different websites and I was surprised at how accurate I was on my first try. I would say I was 75% accurate on the first try. After taking 2 tests which was the sum of about 20 photos. I would follow the instructions and blank my mind, and shapes would appear, and I would draw them down and the accuracy was so surprising I had to take a screen shot of the test picture and my drawings, I don’t have them here I don’t know if we can even post pictures on here, but I’ll scan my drawings and put them next to the photos if that’s possible. Of course only I know that I didn’t cheat and only I know it isn’t rigged, but 75% accurate is too good for random chance.

I saw a boxy looking shape, and the picture was a boxy looking mountain.
I saw an artificial row of lines and a cloud and the picture was a pier with poles and a sunset with clouds.
I saw a round hill that matched up exactly to a round hill. A bunch of rows of pointed things which turned out to be a bunch of sail boats. And I drew a shape I didn’t know what it was but it matched up very closely to a picture of a flamingo with it’s head down in it’s feathers. Too close to be coincidence so I think I’m a remote viewing natural and I didn’t even have to pay Ed Dames thousands of dollars for his courses, I simply tested it out on some free tests online, I think there are many other free tests I’ll try them out later.

I was so stoked about the accuracy that I decided to remote view 3 spirits, I drew what came to mind as I looked at the sigils and names and repeated the names. Closed my eyes and the sigil and name in my mind but my mind blank other than that and some vague images came, some strong images came and 1 moving video came, I don’t know which were my imaginations and which were the remote viewing, which are accurate which are not but I suppose I can re-try it over and over and see if I can improve my accuracy, the value to me is in a picture that my imagination couldn’t come up with, a picture I can draw, I’m an artist and I’ve noticed the grimoires that have art work are either too stylistically drawn with too much artistic license given, too overdone, too focused on the artist’s ability and less on the actual entity’s form, or they are ancient and copies from the ancient woodcuts.

So I wanted a blank slate, and will start with the 72 spirits of the goetia, I already have 3 done and will work on more tomorrow, I’ve briefly skimmed the goetia descriptions before but never in any detail and never enough to have any memorized except maybe Bael, so I will work on the remote viewing with a clean slate not knowing what the famous depictions are described as. I’d say I have a few hits with the 3 I’ve done so far, I’ve googled them and found alternate illustrations to see what anyone else has drawn. If you want to know what they look like I do recommend giving remote viewing a chance, some might want to make a pact or have a lengthy conversation, but to me the power would involve a clear picture so I can draw it, it’ll make for an interesting book of pictures. I’m an artist but I haven’t drawn regularly for many years, at least 10+ years so to have something new to draw will be fun.

Here’s my viewing of 1 of the spirits:

… I don’t know if we can even post pictures on here, but I’ll scan my drawings and put them next to the photos if that’s possible.

I posted a guide to posting photos here - hope that helps, this sounds like a fascinating experiment!

I scanned my best matches, this is out of a very few photos. I said 20 but it was closer to 15, here are my best matches from yesterday’s tests. I didn’t cheat, was 100% honest with the process, I gave the blanking my mind thing a try and when I didn’t let my imagination mess it up these images came to my mind. I’ve always been slightly psychic but never had any real use for my abilities, I think remote viewing might be something I’ll work at and see if I can improve.

Here are my scans, now that I think about it the tests were more associated with seeing 20 seconds in the future as opposed to actual remote viewing, so perhaps that’s what I’m good at, I rarely see glimpses of the future but they are random and I’ve never been able to control it otherwise I’d use it in Vegas or at the stock market. For my first try I was surprised, I never held much stock in remote viewing until I saw what I couldn’t deny as more than a coincidence. Here are my scans… 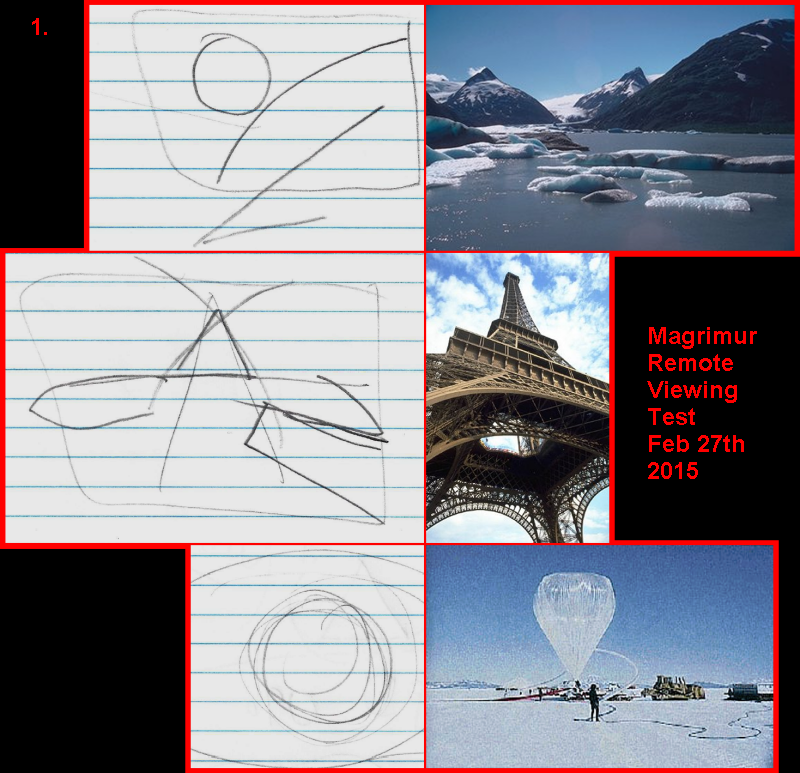 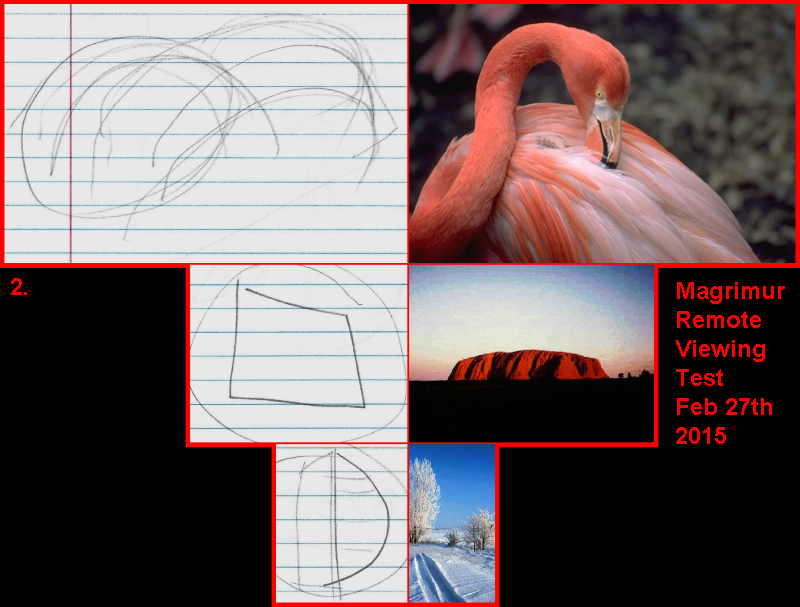 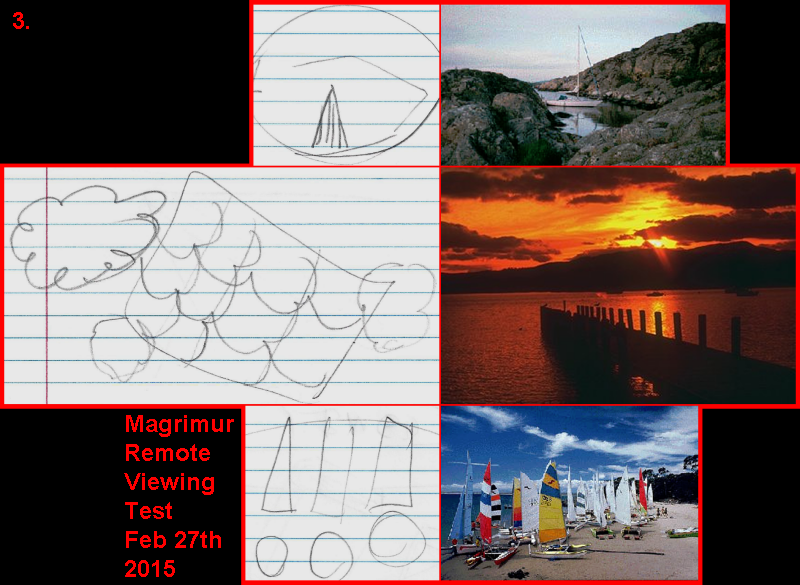 These remote viewing tests are easy to find just google “remote viewing test”, and you’ll see the same photos associated with the tests I took. I really hope I can hone this skill to clearly see a spirit or higher dimension or something interesting worth drawing. I can draw much better than that I got an A in every art class I ever went to but I was somewhat skeptical of the process at first and just quickly scribbled the shapes, the square mountain I saw exactly as it was but I didn’t know if it was my imagination or not so I drew it much more boxy, I’ll have to learn to focus and tell the difference between foresight and imagination.