Do anyone know any good books on remote influence and telepathy??
More specifically, I want to influence some chicks

I can get the list online myself, I need some material that someone can vouce for/ swear by.

Vashikaran using pics is really very common in occult uses. I read some books on remote influence and I conclude that we could simply take a pic of the person, say what we wanna say to them in a clear and concise words (mentally - no need for actual words) for a cpl of days and BAM! They will do what we want them to.

Can anyone second that??

Also, when I am saying the words/commands at the pic of the person where should I look?

UNCLE CHUCKIE’S E-BOOKS Explore the Mysterious Secrets of Psionics These are the books governments around the world DO NOT want you to read.  (I know, everyone says that, but in this case it’s...


His books are all offered free and have techniques and exercises that help specifically with this stuff. Also you don’t need to make the gadgets if your imagination is strong enough simply recreating them in your mind works or even just focusing on the concept at play. At least it does for me.
One of my favorite is channeling energy into your third eye then firing a laser beam like link into an intense lifelike visualization of the person from a photo or memory or if they are right in front of you do that and shoot the thoughts and concepts of what you want to them and to read their thoughts kind of create a suction. It takes practice so stick with it and ask any questions you need.
3 Likes
ElectricDragon January 16, 2018, 7:25pm #3

Can you tell me where to focus when commanding the woman using her picture??

Generally target her third eye and create a link there and send your commands as deep into her mind as possible. It also works to see her in a dark room sitting in a chair in front of you and talk directly to her subconscious using a scrip for hypnosis to implant suggestions. It depends which you think would work best for you.

I have read all of Uncle Chukies books. I wanna buy his 3 dial radionic box before I go into his methods

Sorry this is late but you don’t need to buy shit really. I made mine out of nails, bottlecaps, cardboard, magnet, chain, some markers and a copper cylinder and it works great. I just put it on top an old two way radio but you could probably just plop it ontop you laptop when the lid is closed just for the symbolism and closeness of physical electricity or attach batteries to it and it will work. Bit of a custom design I made but you can make it from scrap and so long as you can focus and charge it with energy as this doubles as an alter for me then it works wonderfully. 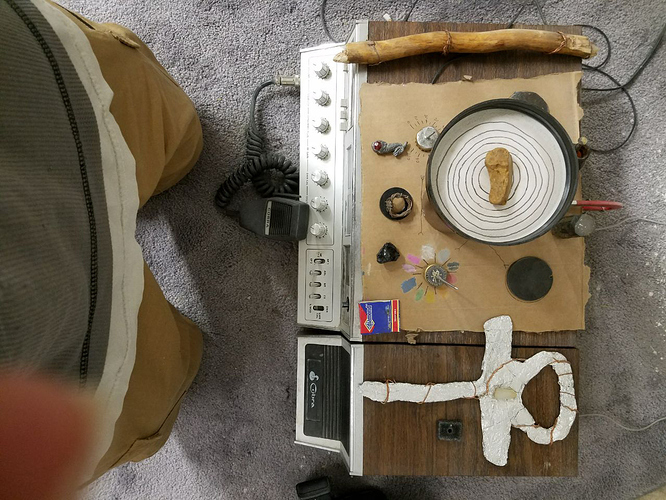 Cool. This is awesome. I also tried to make one on my own, I think I did not get it right.

Can you give me the circuit diagram for your setup??
Exact parts and how they are connected to each other?

I mean a more detailed explanation

Give me until tomorrow to draw that up for you? This is my last rounds online before I start a small ritual. Oh when you make your’s the transmitting and receiving plate will correspond to you projective hand and receptive hand so for me the plate that projects is on the left because I am left handed and the plate that would receive information is on the right. If you are right handed it will be the reverse for you. I would need to write up quite a bit and go into a bit of theory for my design since it is a bit different than presented in the books if that is alright. Then you can go from there and make your own design for your needs.

Find them in the astral, then when they are asleep, plant ideas into their dreams. You’d be surprised at how easy it is to manipulate the dreams of another.

I first gotta get to astral plane myself

I donno how to astral travel as of now.

Can you elaborate a little on this please? I find when I think about putting thoughts into a targets head right before bed I end up walking in their dream . Is this something similar?

Kinda yeah. A bit different, but you can figure it out. 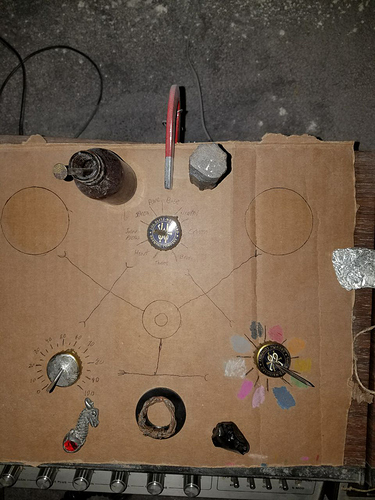 image.jpg960×1280 272 KB
Alright so the base theory of my box is it has three dials on the main panel. The bottom left is for intensity or tuning to an extra power, the top is chakras with a neutral position, the bottom right is colors with white being default neutral. These are connected by lines forming a triangle which is a good shape for containing and condensing forces as we know from evocation practices. From there the two plates that would receive and transmit or connects to the central circle which helps focus the energy on that point and allows their vibrations to transfer in and out as needed of the charged area. The third line from the circle helps to ground and balance the energy with all three sides of the triangle. The pen I used is infused with energy and is the one I use for most sigils I intend to use and such.
It is easy enough to just infuse the ink with intention. In the middle circle I place a magnet to further help condense the forces and give them an extra link to a physical force then the copper cylinder I like to think acts as an echo chamber building the power while it transmits up like an antenna. I use cut out metal plates for the receiving and transmitting pad and the magnet on the back with a chain connects it to the old radio below symbolically so I can use the dials on that to get rates but you can connect it anything electronic that it can be set on and disconnect when not in use. You will just need to make it bigger to add the number of dials you want. As for materials since I am a cheap ass I used bottle caps and nails for the dials and old metal circles I had. I charged it all with energy before and after. Everything else you see is just various things that would go on an alter since this doubles as my alter. I got one of those step on me pads for halloween decorations under it connected to a flashdrive so I don’t have to print out every picture but can put it on a flash drive or hook to computer to use a video. Bit of a modern modification there.
So the basic principle as I see it is that this whole setup in addition to being a focal point for power as an alter is a highly modifiable hypersigil connected to material and immaterial forces and using it is an evocation of the powers and vibrations with any modifiers you give it to transmit.
6 Likes
ElectricDragon January 18, 2018, 3:49pm #15

@ElectricDragon You are welcome. Have fun with it.

That said, you don’t really need a picture of your target. Just vibrating on a certain frequency (and that is the intent of a determined Vashikaran mantra) for 1 japamala lap or 2 (108 or 216 times), focusing on the target (and there you can project her astral body into the meditation if you want to), and do this for some days (or until you reach your desired outcome) normally will do the job.

For me, meditation with closed eyes is better because of the visualization part. It’s a lot easier to structure something that you want if you close your eyes. Also, you’ll be “apart” from this reality, so it becomes easy to mold it as you want.

When you meditate you have to avoid all distractions and interferences that could disturb the process. Using pictures on a spell it’s ok, in fact, it’s necessary for a lot of spells. But not in meditation itself. Maybe to help to structure the astral body of the person, maybe to become the image of the target clearer, but that’s at the beginning of the meditation process.

Soul travel could be a good way to influence the person too, but you have to know what you’re doing.

you seem experience with this.

You know any mantra that worked for you before??

I’ll take a picture of my box/diagram tonight for you.

Straight up telepathy should work to influence her(s). HOWEVER…as a long term telepath, I want to WARN you, for your own sake…that forming a LINK with someone (if it becomes mutual) may be very, very, very difficult to untangle. One way…not so much. You might not realize a person is also a telepath and they might link to your link and then you have a two way and then you get to share all their emotions and blah.

That’s really the only downside to telepathy. Because when/if you cut the contact with them, they can freak tf out and go stalker-mode on you. I’ve helped some ladies cut connections before and it was getting really ugly for them beforehand. I have no problem with cutting connects, but it’s just annoying.

You could also evoke those with mind-manipulation powers (such as King Paimon) and ask them to unlock that particular aspect of your mind and ask them how to activate/use it in the way that they do.

Only for professional purposes. I’m not on love/lust/obsession spells anymore, only do lust spells on me to get that “lustful aura” and only when I feel to much down for any reason. I used this to beat the competition for a client that was very important, and I chant this to draw all his attention back to us again. It worked at some level, maybe if I did this for 21 days as it was suggested it worked better.

One mala (108 times) facing east per day for 21 days is the suggestion for it. Some people will tell you to wear white clothes but that doesn’t make real difference. I did it for 7 days, the client becomes very interested in our product at that time, but I stopped at the 7th day, and then it fades quickly and he bought in another company. Well, it worked at some level since the client not even heard from us before that.

Anyway, if you’re willed to try it do it fully. When I say “vibrations” I don’t say about literally vibrating but chanting this mantra for the right amount of time. With all magick, you literally mold the universe accordingly your will. Vibrating, for me, means that.