I had used my pendulum about a week ago, when bored and asked a few questions on my mind. Mainly on my path, current situation, and where my life was headed. I began to ask who I was talking to (ex, male or female on a yes - no, maybe - never board). It stated it was a male, who was never once a living person. It also said it fed off red, and was watching me for a while. I asked if it was someone i’ve heard of, or anyone I know heard of. It answered no to both.

I began to get confused and asked if it was an animal, to which it replied yes. I asked if I could meditate and see its face, which it also agreed to.

I put down the pendulum and closed my eyes, sitting to meditate. When meditating, I saw in my eyelids the mask of a rabbit. It seemed to have wide-open eyes, very large ears and a smile.

I started to get frustrated and confused more, so I ended the conversation and thought on it. I thought it was gone as I couldn’t connect with it and it hadn’t responded to any offerings. I waited and forgot about it, until today I had noticed that a few of my herbs and items went missing. I know theres a fae home in my backyard (as a wiccan, faes tend to move or hide objects; or sometimes steal them) and ignored it; thinking I would find it later.

There was a moment where I sat and had a reflection moment on my life where I remembered the rabbit, and saw him in the corner of my eye holding out a hand to me.

I’ve never heard of any demon or spirit who was turned to a rabbit; and this is all the information I can really tell you guys. Any ideas who he may be, and if so; how can I reach out to him? 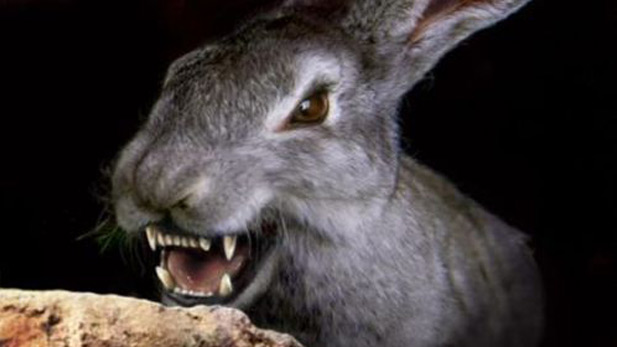 Looked it up- saw a shadow identical to one in an image- actually shocked; it had the two (im guessing?) swords and everything. Not sure whether to panic (as much i use spirits, i’m always nervous to upset one or come in contact with a negative one)
or actually feel in joy I have a spirit who contacted me first before any others.
the image was https://1.bp.blogspot.com/_ROHKHBnDzg8/SG5Ok5YzVRI/AAAAAAAABaM/HQYb0XAldVY/s320/nana3.bmp

I hope I was able to help a little at least on your quest. Not really heard of anyone here working with that spirit

You know any background on them at all? I never even knew they existed and would like to know whether I would keep it around or burn sage to rid of it for my own comfort before judging or interacting any more. I’ll probably ask it if thats who they are as well with my pendulum later.

Odd, reminds me of the god Pan (the horned god) for the misunderstanding and life he had.I am part native, so he may have followed a few of my past family members (i’m hereditary witch, so my views are mixed) or may have been related to me or someone close to me in the past (life, or ancestor.)

Depending on how he treats me and the things around me, I may leave him be as long as he doesn’t injure me or any loved ones (it claims hes typically a calm but trickster spirit).

Thanks for your help, it’s greatly appreciated.

Anytime my friend, that’s what we do here at the forum