I reccomend you see some of my recent posts. Hermetics uses a lot of Christian terminology mainly as analogies because it is easily accessible but traces back to various Egyptian and Roman/Greek influences but also eastern techniques. It is best seen as both right hand and left hand path uniting aspects of both in the philosophy though how much to one side individual practitioners go depends of course on the practitioner themselves. There is also a resemblance to chaos magick in a more structured sense.

I recommend first Bardon’s books and keep in mind Bardon was far from a saint. He ate meat, smoked, had sex, fucked some people up if you believe some tales and aided a great many others. There are other sources I like I can share as well. Once I get on computer and dig links up.

Justin’s blog is rather good and recently having read his book it also presents a workable base. The point of uniting with the divine is to see there is no difference between yourself and the divine allowing you to act with universal authority. 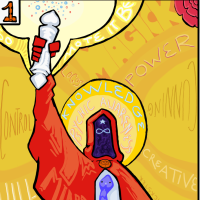 I am also a fan of Jason Augustus Newcomb’s work which presents some fairly broken down techniques and ideas that are quite adaptable.

The Book of Magick Power

The New Hermetics: 21st Century Magick for Illumination and Power

I have read both those books by him and while the first is less philosophy and more broken techniques the second has both techniques and also introduces the philosophy and mindset used but there are various interpretations on Hermetics depending on what sources you go with so it can be quite flexible within its given themes.

Also forgot to answer before but there is no real conception of good or evil beyond personal definition. It is all just concepts based on your perspective and how it relates to you or others. I would go so far as to say the closest thing to evil that you might see mentioned would be perhaps willful ignorance and otherwise forcing yourself into a low state of being.