Question about my spirit

Well, I asked Attakeria. He is wary of King Paimon (but I don’t understand why). In general, his character reminds me of a hermit who does not particularly like to communicate with anyone.

Even though King Paimon treats him well, Attakeria does not change his attitude. The most ideal for him is loneliness, silence and mountains. Sometimes I myself don’t like his behavior

It seems to me that with the help of the rune, I will be able to perceive a little more energy, but, again, not all. It’s too much for me at the moment. In any case, I’ll see how the situation changes with the use of the rune.

Well you need Attakeria to come clean on this one. He wields power that aligns to you .seek deeper insights.but maybe its because of conflicting energies

By the way, Attakeria responds well to mantras, especially Gayatri and 100-syllable Vajrasattva. They also activate his energy to some extent.

What do you mean by energy conflict?

Considering all the information received about my past life, I get a very interesting result. Attakeria is a resident or representative of the Fiery World.

But the Fiery World is a spiritual space, where, judging by Roerich, various beings live, having some knowledge and capabilities, akin to demons or angels. Unfortunately, at the moment I cannot understand exactly how Roerich is right, since the memories of a past life are fragmentary and, moreover, are partially blocked (possibly in the subconscious).

But I would like to conduct an experiment. Can anyone try to summon Attakeria as a spirit and try to question him about his capabilities and knowledge?

About a column of fire

The more I try to study my past life, the brighter and more distinct the image in the form of a column of fire with a face or a mask on the face becomes during meditation. Its color can vary from blue to almost white. Its height is about three meters (according to my feelings). When I am in this image (a little scary, but impressive in its grandeur and singularity), I feel lightness. As if invisible shackles and restrictions are falling off you and you become absolutely free from the forms that restrain you. Sometimes the signs that I drew earlier hover in this fire, or they can spread from it along the ground. Below I drew a drawing as close as possible to the image in meditations. 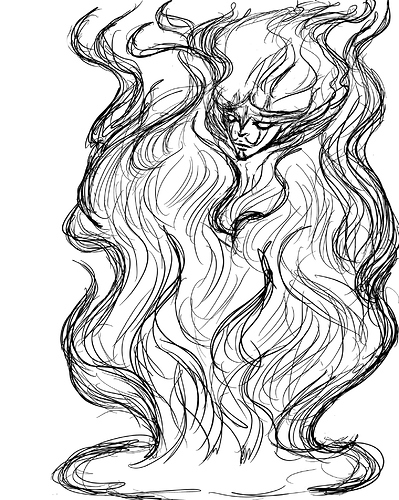 I have already got used to the fact that in the process of meditations, information may suddenly come to me, in some way connected with my past life. So today I saw a platform paved with slabs and a stone arch standing in the middle of this platform. It was made of massive stones on which various signs were carved. Outside the site was a harsh area where small bushes grew (somewhat like a steppe). The sky was covered with gray and low clouds. It felt like I knew this space very well. And the name of this area - Borderland - clearly appeared in my head.

Traditionally, I add a small sketch of what I saw during the meditation. 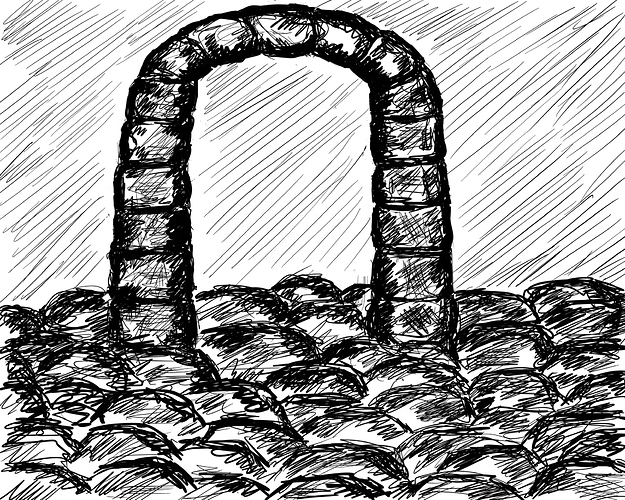 About heavenly or higher fire

Naturally, I am haunted by the question of the gatekeeper, who was Attakeria. So, I decided to try to ask King Paimon about it, since he helped to clarify some of my past life.

Attakeria was the guardian of the gates to the worlds / world, which required initiation and endowment of the initiate with the highest or heavenly fire. Without it, access to this world / worlds was closed. Attakeria tested the initiates for their “strength”, whether they were worthy and ready to pass through the gates, and also took a direct part in the initiation. This is a heavenly or higher fire - a transforming force or energy that not everyone can perceive (as far as I understand, it is necessary to prepare for its perception).

If I found confirmation of the Fiery World by Roerich, then, of course, there is food for thought. This information is partly confirmed by Agni Yoga again. But the concept of heavenly or higher fire is found not only in Roerich’s teachings. And again new questions are born to these answers

Has anyone come across the concept of initiation by heavenly or higher fire in practice?

What kind of world or worlds can it be where such initiation is needed?

I would be grateful for any hint or opinion.

Has anyone come across the concept of initiation by heavenly or higher fire in practice?

In the Judeo pantheon their ‘heavenly’ fire is a form of initiation for those wishing to join their pantheon it’s a means of cleansing so I’m sure other places may use the same or similar concept.

Thanks for the answer! I feel that I will have to study Judeo pantheon in more detail, and of course the cultures that influenced it. I do not know to what extent Attakeria can be potentially connected with him, because his origin is from the Fiery World. But it must be borne in mind that this concept appeared only at the beginning of the twentieth century and earlier the Fiery World could have had other names.

I agree that in many cultures fire plays the role of a kind of purifier or a transformer of the soul, consciousness, etc. In this case, the emphasis must be placed on the heavenly or higher fire.

Information about Attakeria as the gatekeeper was hard enough to learn. I asked King Paymon the same questions several times to make sure I understood him correctly, but even now I am not sure that I interpreted everything correctly. I will return to these questions a little later, because it is very difficult to find confirmation of such answers.

So what I learned:

The gatekeeper was called earlier and he had other names (I asked this question earlier, but decided to ask again). I wanted to know what exactly those names were, but King Paimon gave me only a few epithets: Fiery One, Seer of Souls, Ancient Flame.

I summarize that it was all very interesting to know, but, nevertheless, this information needs to be double-checked.
I still have a number of questions regarding Attakeria and research into its activities, but they will be asked next time.

Use tarot to help further understand?

I would be very grateful if you help me with this!

I wouldn’t mind giving a hand where it’s needed.

About a sudden find

So today I felt a strong urge to talk to King Paimon about my past life. As in the previous time, I emphasized the repeated clarification of the information that I received from him.

This time, I focused on the time and location where, presumably, Attackeria could be called.

Here’s what I found out:

Attakeria were caused over a thousand years ago. Summoned by the priests who summoned other deities and spirits (they were polytheists).

Attackeria was not an evil spirit. But he was fair, strict and impartial.

If we talk about the area, then I got this description: it was not cold there, but warm. Wet wind. In the distance there were mountains, near which a forest grew. There was water nearby, it seems a source (possibly sacred). Most likely it was a plain on which stood a medium-sized temple, made of stone and some other materials (possibly wood).

Of course, I asked about the attitude towards the Judeo pantheon, but, as far as I understood King Paymon, Attakeria is indirectly connected with him.

But! After these disputes, I decided to look on the Internet for the origins of the Judeo pantheon and here the Hittites caught my attention. I began to study their mythological ideas and found something interesting.

It turns out they have the god of doors Apulun, he is the Etruscan Aplu and the Luwian Appalinas (Apaliunas). Also in one source I found that the Hittite god Apulun is called the guardian of different worlds. Finally, my attempts to find at least some analogs of Attakeria as a gatekeeper were crowned with success.

I am not saying that Attakeria and Apulun are one and the same, but at least in the history deities are mentioned that are somehow connected with my question.

What do you think about this?

Earlier, I wrote that I wanted to more fully and clearly feel the energy of King Paimon. I can say that there are some successes in this area, since now, in the meditation process, his sigil burns for me with a golden light, and if I put my hand on it, then thin golden threads entwine my hand.

But again, all contact with King Paymon occurs only when I am in the form of Attakeria and nothing else.

Today, perhaps the attempt to feel his energy was longer. I felt a heat in my body (this is always the case when the energy of Attakeria is activated). In my mind, I saw how silver-blue blood came out of my/Attakeria nose.

Further interaction had to be stopped.