Keteriya’s on a bit of a hiatus from Balg at the moment, but passed along a servitor she mad and asked me to check out. She felt someone on the forums needed it. I checked it out and then threw up a thread for Regulars to also do so. It was generally felt to be safe.

The spirit’s name is either Ashara or Shara. Either is fine. You would open the picture like a sigil and keep the intent in your mind that you’re calling Keteriya’s servitor behind it. Warm and protection were to two most common things picked up in the testing round.

I can relay comments, questions, and concerns to Ket, but will likely do so in small batches, if I get a lot at once. 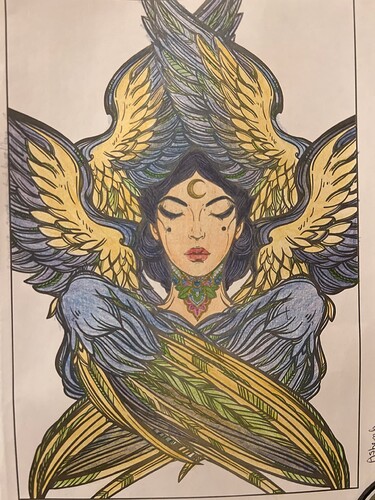 Many thanks to you and ms. black and all of the people who helped with the test run.

I also have a few questions regarding this servitor that I hoped you or those informed could shine some light on:
If I’m not mistaken ms. black had created another protection servitor named Luna,what are the differences between these two?

If summoned how is one supposed to command her?Is there a list of capabilities to choose from according to our need like Luna had or does it run on auto mode so to speak?and if so what is her function exactly?

Lastly I wanted to ask about her food source and whether she has an independent one that is enough for her to function or should be fed by some means when summoned?

I dont wish to drill this topic more than I have so let me thank you beforehand for taking the time to answer this beginner’s questions🙏.

Luna is more geared towards the spiritual world and keeping energies balanced, wards up, for weeding out imposters and destroying parasites.

Shara is really more active protection against certain or near certain danger. She’s the one you call out to because someone has a handgun to your head, and the cops are still two blocks away. She’s the mother bear not afraid to rip someone open for her cubs, the husband that would throw himself in front of a train for his wife, the nurturing comfort when your scared of the dark.

As far as commanding her goes, it works kinda like Luna in that you can either know exactly what you need or you can be scared shitless and just ask her to help. Either are appropriate depending on your skill level and need.

This is the one you want when your in the midst of a nuclear mage war, your in contact with the authorities but they can only do so much, etc.

She has her own power source, while energized and empowered also by myself she was more given to me to share through a mothering loving all goddess source like thing that I cannot figure out how to describe without sounding crazy.

This comes as though it was sent to me specifically.

I’ve been off the forum for a while now and only found this last night. Shara is a lovely picture and I found myself gazing at it, opening it and realised that I had what could be a precarious journey on my hands in the morning so I simply asked for safety and protection and thanked her.

I took a choice this morning and went on my travels knowing it could have resulted in a kick in the ass and a kick in the face at every junction.

I had to balance the idea of what I thought I deserved (I deserve a good day) with what I wanted (I want a good day) against a clear risk of injury.

On balance I could have decided that the risk of injury was more proportionate than the chance of having a good day.

Anything could happen and I chose to enter into a scenario where injury was pretty likely unless I had a great deal of luck on my side.

I asked Ashara/Shara for help.

And sometimes we think about deserving something, and how does that work??

In general I think we don’t get what we deserve. And it’s a bit of a funny word and we can choose to say that “to deserve” doesn’t apply. To simply choose is all that applies.

So I chose to go on my journey this morning. I didn’t know if it was going to be a good day or not but choosing fear and staying at home all day would only mean that I wouldn’t get to find out if it might have been a good day.

On the other hand, by taking that risk, and it was a real risk against safety, if things had gone against me then along with physical harm everyone would have said it served me right and I got what I deserved.
I mean, really, I shouldn’t have taken that journey, safety wise, but I wanted to because I wanted to experience the chance of a good day.

On reflection, when I got back home and breathed a sigh of relief I remembered how I asked Keyeriya’s servitor for protection and the fact that if my journey had gone wrong, apart from possible physical injury, the authorities would have thrown the book at me for sure but by circumstance I kind of had to do what I had to do.

The remarkable thing about this precarious journey and my calling on Ashara was that I felt reasonably calm along the way and very much at ease with the decision I made when I think most people wouldn’t have in this situation. The road was so much more clear than it should have been and I felt that the risk factor had shrunk to almost zero.

So thanks to Keteriya and Ashara I was afforded confidence, compassion, surety, peace and a great day

And sometimes we think about deserving something, and how does that work??

In general I think we don’t get what we deserve. And it’s a bit of a funny word and we can choose to say that “to deserve” doesn’t apply. To simply choose is all that applies.

I saw this about a week after you posted it. I have to say, I was stupid proud of your application here. I didn’t have a lot of time to leave all the extra wordy details, that no one even needs.

I saw what you wrote and was like, wow. You are doing a great job, you were able to take what was given, intuit how it fit into what you need, apply it, then confidently go about your day, never once seeming to question whether or not you’d made the right choice, whether she heard you or any of that.

This is how I’ve operated through most grimoires, and I’ve had a lot of success with it even though my applications often seem loosely related to what was intended so, I’m glad to see others working in similar ways, especially since this is how I mean for most of my servitors to function for others.

Bump it up, Bumpy!