[image] Obsession of the spiral. Obsession is a tool for a mage (or sorcerer, witch, etc), but just like in Junji Ito’s manga Uzumaki (うずまき, Japanese for “Spiral”), obsession can lead to despair. A curse. Death. Project Uzumaki is about obsession over a simple shape. In the manga, the town of which to story takes place is cursed not by a ghost or spirit, but a shape; the spiral. A spiral by itself is merely a shape, but take this same shape and contort reality to this shape, and you see vision…

I stared at the triangle for about 20 minutes. Within that time, the following things happened;

It’s already a challenge to not think about it.

Hit the theta gamma with it, nice.

Damn, I can’t believe it worked!

I was entirely focused on making the triangle gold, and I had to try multiple times because it disappeared in my sight! Once I did make it gold, I closed my eyes. I had a vision where a black square surrounded by blood was cut into many triangles that became a hall of mirrors and light. I’ve been trying to find triangles in everything and last night I had a dream where I fell through a triangular tunnel!

Also my family had a conversation about triangular tables yesterday after breakfast. Who can imagine a simple shape having so much appearances in one day?!

More obsession. A dream of a spinning triangle. Dividing everything by triangles.

Some things I knew about the triangle before starting this;

did you do some soultraveling aswell during this project?
I had intense dreams within the last few nights, where i was definatly pulled into my godself.
I had one occasion where my oath of silence was re-inforced,
and i was complimented on it by getting a line about 7+16 equals chi, yet that can’t be learned just by study but must be revealed and achieved through silence (Stillness ~ Meditation).

It was told to me by 3 Woman looking exactly the same, dressed in Red (propably leather).
I think they where brown haired and about 1,7 meters in highd.
Altho that may be incorrect as i was in another man’s body.
The body i posessed at that time was Blond, and as the females hair it was curley,
The man was Tall, muscular, and his hair was shorter then the female’s hair, yet it was also going to his shoulders. Damn, i knew that dream was importend and now i’m stuttering on the details, as i grasp back to the vision.
I was sure i had been in a posessed body, since i awoke suddenly and still had a part unsolved.
7+16 is 23, yet in the other body i was considering 32 to maybe be 35.
which forced me back in my own body to take notes.
I considered going back in, but taking notes kept me awake to long.

It’s interesting, i installed a triangle of manifestation for personal use in myself, by connecting the pineal gland with the eye bowls to. I use that triangle only occasionally, lately i found myself using it again.
Somewhere on this forum i first hinted at it being possible, and later talked about it as far as i remember.
I somewhat didn’t want it to much out there, since i considered brain damage a possible negative side effect,

However, your triangle work made me very curious wether it was co-related.

I also worked more with lucifer again, which is uncommon for me.
I do have a relationship with him, yet i normally don’t go into it so much.
Well he is mentioned a lot by E.A. currently, which may have drawn me there.

@Yberion I’m mostly initiating lucid dreaming. The focus is entirely of the symbol. Symbols are correlated to a lot of things.

Thank you for presenting your thoughts. I will update my journal later. I read your post yesterday but didn’t reply because I’m quite busy today and needed sleep.

I’ve been tired all day because of a family related thing but I’m figuring out quickly is that the shape really does possess your mind, literally. I keep dividing things by triangles and I can’t get it out of the back of my mind even when I’m relaxing… I also see a triangle every time I close my eyes now.

I’m going to do the experiment for a week longer mainly because I became distracted this week but also because I noticed that the longer I do the exercises, the more effective it is.

Still dreaming about the triangles. I tried using an image on my phone last night but I didn’t find it to be as useful because the screen light was very distracting for me.

I’m actually really happy I’ve been doing this because this gives me the opportunity to find shapes where I wouldn’t have seen them otherwise. I’ve been drilling the triangle so much in my mind that now I have a sense that it’s the very basis of reality. Dividing everything by triangles, seeing triangles everywhere I turn, in shapes and in the air… all shapes that I have been seeing have some secret of the triangle. Which makes sense because the triangle is the most simple non-circular and non-arcing shape there it. Circles can be created by clustering equilateral and equal size triangles almost infinitely with the most center part of the triangle being in an assigned point.

Much like the effects after smoking die-methyl-triptamine, we soon realize just what you said! I love your work and ideas keep it up! Very interested 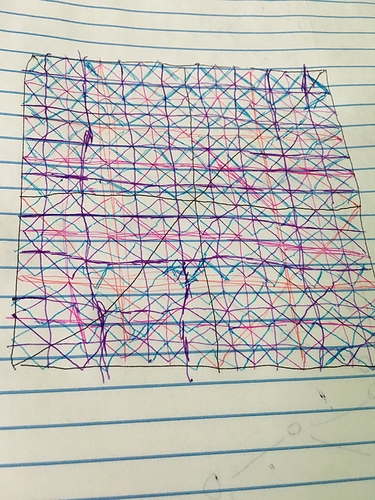 This is what my brain has been doing to every shape I come across.