I know you weren’t. But you’ll be okay, you know.

Sounds bizarre and I’ve never come across this. What makes you think they are angels? Are you 100% certain someone unknown to you isn’t trying to mess with you? Have you questioned these angels about why they have an issue with your spiritual work?

Sounds bizarre and I’ve never come across this.

Yea I hear this a lot.

What makes you think they are angels?

They have tried to talk to me many many times from the moment I returned to the Occult. They try to get my attention in many ways. While meditating, while doing rituals, even when I watch a movie or I try to sleep. And they get really annoying and persistent because they don’t understand the very polite “No, thank you, please depart.” and I have to put my foot down. So you understand that I know how their angelic energy feels like. It’s not something it can be mistaken because their energy is not compatible with me and makes me sick.

For the first time, when they actually succeded to remove me, it was revealed to me with clairvoyant visions. I had convienced myself (after I got to know the Demons) that it was a lesser being, but nnnope. I was and I wasn’t surpriced at the same time.

Are you 100% certain someone unknown to you isn’t trying to mess with you?

It’s more like 100% x infinity. If someone wants to mess with me, that’s them.

Have you questioned these angels about why they have an issue with your spiritual work?

No and I’m not planning to, you can understand that after all this I don’t trust them or their words. If they cared to guide they would step up in my first awakening. They wouldn’t try to keep me away. Why Demons never did that? Or any other ancient?

In my eyes, the angelics don’t give a damn for our ascension, they’re happy with humans being ignorant, praising them along with the troll god as we did for 2 thousand years. Why they never said to the older magicians that the Demons are not dangerous and they where giving ways to humans to restrain them, with their help always! Why they were lying to humans all these centuries for everything? It must be nice receiving all this energy, right?

I’ll be the first to say I’m not a big angel fan. On the other hand, I’ve never had them bother me about anything without specifically calling upon them. (I’m the one that doesn’t’ do the LBRP cause it made me feel depressed.) I recall I at one time considered initiating myself into the planetary spheres, back when I was a right hand path (or middle path) magician. I recall this dream I had about why I shouldn’t do it, something to do with Gabriel and the sphere of the moon. I put it down real quickly cause I didn’t need my life more messed up.

So, just like demons, angels are separate and individual and each have their own function. So, with this angels bothering me you need to be more specific, rank, function etc.

So, with this angels bothering me you need to be more specific, rank, function etc.

I think I was clear that I’m not interested to have a chit chat with them… Their rank or their function leaves me completely indifferent. I’m not the one bothering them, but the other way around. I don’t ask them their name, they give me their name by themselves when they come uninvited. I’m not the one who’s asking them to stay, they are the ones refusing to leave when I ask.

I don’t know how things are in your universe, but in my universe the abrahamic angels don’t have a spot. I’m fine with a relationship similar with the one I have with the troll god for nearly 2 decades: I ignore him, he ignores me and no one bothers the other.

Prolly…because you work with angels…and youre livin in the universe that they built around you to believe.

You know…people dont have to believe in the “angels are good” paradigm anymore, either, even though its constantly shoved down our throats.

I seriously don’t believe these are angels. You’re being tricked by shapeshifters imo. If you’ve ever experienced true angelic energy, you’d know the difference. But that’s my opinion, based on plenty of personal experience with true angelic energies/beings, AND unfortunately imposters/shapeshifters. The only way to really know the difference is to be very familiar with the true essence of the beings they try to make themselves out to be.

I can see there are some members of this forum who have a real chip on their shoulders about angels, and it seems to me, it’s poor perception and understanding of what they are and why they exist. There’s nothing anyone can say to a hardcore angel hater to help them, except, they need to be more discerning instead of being here spreading hate.

The rest of us who have an open mind and have worked with angels, as well as other types of spirit know better.

I know they are angels and I don’t really have to prove anything. You have your opinion and that’s fine and I have mine

I think it’s my right to choose If I’ll work with the abrahamic angels or not, and since my decision is not respected by them, and I’ve been harassed, I have every right to dislike them and judge them

I’m not going around in every post that speaks about angels “spreading hate” as you said, but there’s no reason to be “more discerning” on topics that discuss the problems magicians have from angelics, since I have first hand experience…

I’m sorry if you don’t like my experiences, it’s not exactly pleasant for me either, but as you have the right to support your opinion and choices, same goes for me.

The purpose of the angel trap is to capture and dissolve any ‘angels’ created on the astral by the fundamentalists to seek out and harrass anyone that does not share their religious beliefs.

The Angel Trap was originally published in Green Egg. The author’s name is Frater Scientibus. The author of this version is James Cowan. He changed it slightly and made it his own.

a clean jar with a tight lid

a lighter or matches

Remember to destroy any image of foreign angel’s, let’s say winged human images which were given to you by others

Would an angel come and fight even Steven vs a single opponent? Or would it utilize ALL of gods power given to it and/or legions under it to say how it’s superior to man or the man is undeserving to exist because it’s guilty to exist and unclean and god hates human filth that doesn’t submit?

Why shouldn’t that hatred be reflected back. They are all entitled pansy assed fucks that would never survived here. They’re not alive in the flesh. Same goes for demons or any EVER SPIRIT.

We are alive we fight to survive every day from before birth until death finally can take no more and reaps us. The raw power in a living being compared to that which was never alive. They seek the “warmth” sanctity and protective HIVE the parasite OMNI created. Shake the nest and they swarm.

Perhaps the “demons” are much the same being a different hive. Do they not have legions acquired by some means? No one ever questions who or what these legions are? By force or honey they swarm or are on leashes to that being.

So be your own living god and crush these fucking beings because you’ll get more satisfaction knowing you rose alone and on your own than take their “aid” with a price. Maybe that’s why no matter where in my life and belief that core conflict of battle screamed and raged. Maybe that’s why I have tinnitus as a reminder.

Man is no Saint but who wants to be a saint or pariah or martyr to another’s cause. Angel hate, demon have, ever spirit hate… maybe it’s justified.

An individual awareness created but free will to be created wasn’t there. It was done. You weren’t asked. What does not exist can not be asked so by right of dictatorial might you are. I say the being plays both sides and enjoys the strife and game. I say it is as deceitful as those it calls great deceivers.

Hell is existing and knowing you didn’t ask to be so you must fight or allow yourself to be subdued. Really starting to believe the sephirothic is buddy buddy with the cthonic and it’s a game to alleviate boredom.

FUCK EM ALL AND SHOW WHAT LIVING GODS ARE!

I won’t lie, I’d drag everything into the devouring void and end it all. EVERYTHING.

Those damn angels over reaching, thinking they get to decide everything.

Sneer.
I have a complete Tolumbine study on it. 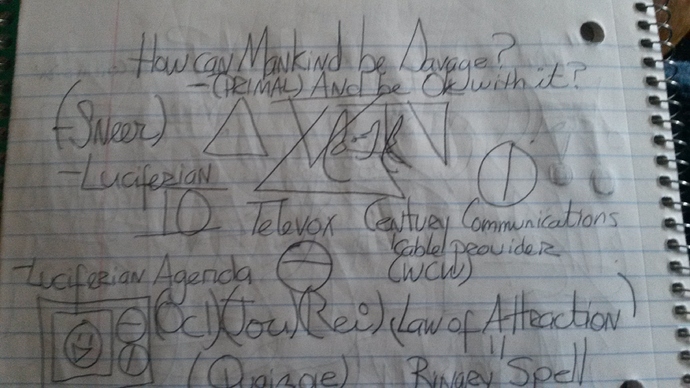 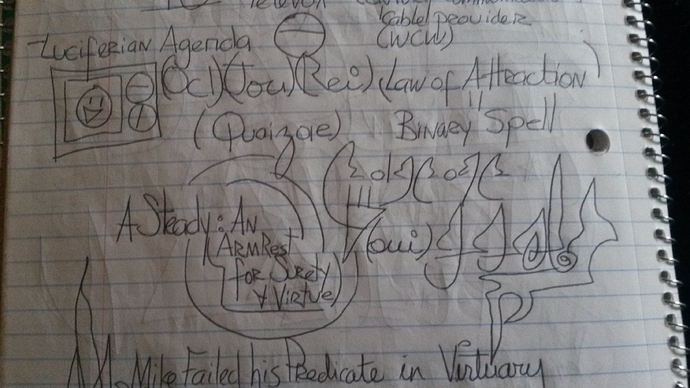 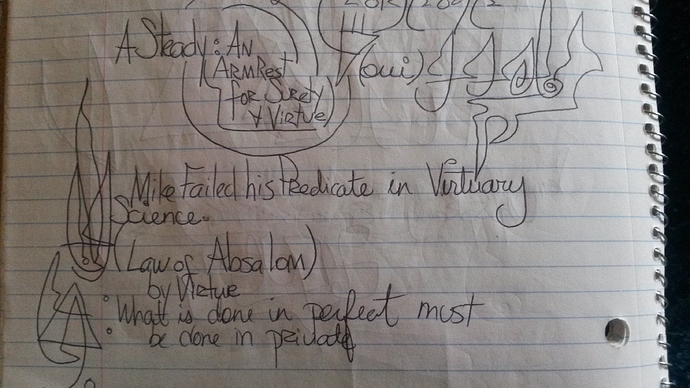 You should thank the Angels

No. A friend should not be imprisoned.

It would be one thing if he was being attacked but he wasn’t, he was working WITH it.

Apologies. While I have followed this off and on from the start your gender was not a fact I retained.