Probably one of the craziest true stories

You know more people would interact if you threw in some paragraph breaks… that big long wall o’ text is near enough unreadable. 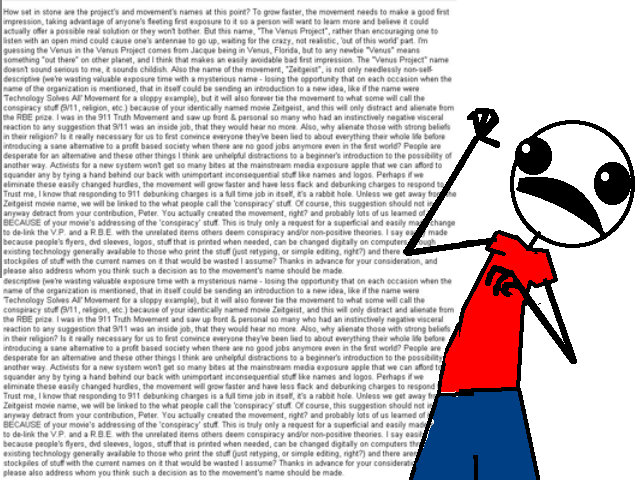 Sorry my brain never thinks to use proper paragraphs not my first time getting the advise.

I think when they did the dixmck thing at the race that it was the gov messing with me.

They did the what now?

I will pay 50 bucks if someone can translate this to me.

Typo lol sorry the flashing of dicks in my face at the rave not race. I just spent hella days fixing paragraphs and editing typos then when I went to post it told me I’m not allowed to view this material.

Bruh, why would you see this in a rave??

Rave is meant to be a cool thing, its like a psychedelic party with all those alien light going pew pew!

It wasn’t my thought trust me it’s part of the government mind control there doing to the whole world shortly after that they made it look like 7 spirirlts just showed up at my house I said hello danced with then then they started raping me 24/7 for 3-years they don’t make me see something trying to preform the act anymore but even right now there fucking with my nerves making me feel pulsations on my dick and ass. They had stopped doing the molestation for quite a while but last few days they started again.

You only have a limited amount of time fore your post switches from editable to non-editable.

For long posts, try making them in another app, maybe one with dictation, and then copying and pasting when you’re happy with it.

This seems to me more like Journal material. You’re not asking us for feedback or to answer any questions, so I’m gonna pop it over to the Journals category.

I found the word “succubus” in the big wall of text there, but I’ve got lost of what it’s all about.

I see writing as an artform, and paragraphs makes it easier to breathe between the lines. A paragraph can be used when expanding a story, to explain something deeper, when changing a sidetopic as a part of the maintopic and to give the reader some room to inhale air to the lungs and exhale air before reading further.

You see what I did there? I made a paragraph, after I shared my point of view on writing and paragraphs.

However, this is not about bashing you or anyone else that finds writing as something hard to do. There was a few words in there that caught my attention, though.

…and keep writing anyway, and keep being you.

I’m looking for feedback for sure I just have a way of getting lost in how many words I use when writing lately my best friend responds in text, that you can’t oviously expect me to be bothered with reading all that. But I definitely want question and people option like at the rave what was I not worth of? And occasionally you get to hear who speak because it came from my body I felt the vast amount of energy discharge and seen the air ripple but was unable to actually hear my voice at that moment. Who was allowing me to be there vessel? I think I’d probably just be better off proof reading my post befor sending I’m sorta lazy especially about paragraph form. Thanx for your concern and for reminding to actually request everyone opinions and let them know feel free to ask questions.

So I used a 3rd eye awakening chant that takes 4 days to activate everything got crazy around that time. I was in meditation but was treating it more like prayer speaking out loud my feeling desires ways of contentment then right after I stated how lonely ive been and how it’s been a year since physical relations it appeared in the pitch black.

Three images all appearing out of what seemed like was my aura that build up around me, I thought the images appearance looked like a magic the gathering card I had recently obtained I don’t remember the name of the card but the flavor text stated the 3 being were, life, death and eternity. All were silent.

Then a large swirl in the energy being used to give me an imageing then the swirl transformed into a beautiful female spirit she appeared in energy form more then physical appearance. Then she became to show me how everything was good in my universe and I no longer needed to be lonely. We 69’d with me on bottom and I could basically feel all of her weight on my while trying to lift up while having a tongue full of what felt like love not lust.

Following that experience I started calling out to her at night time or when ever I had alone time and seeking her embrace I knew I was allready in love with her. One time we were together and about the same time we were finishing up in the top floor of the hotel room my friends came back in, immediately Justin turned to our other friend and said can you smell that made it oviouse it was from sexual activities with a non human spirit.

I ended up believing I knew her name but I never really had any thoughts or words given to me I know now it’s just the name I gave her. I then believed for a long time that she was the actual being associated beith that name, Brunhild from Nordic beliefes. I feel silly for think that now but I held her image high up like on a pedestal with utmost respect. Brunhild stayed with me for a long time until eventually she was no longer with me because of the horrible infliction the was under from government mind control. Not knowing what was actually happening to me.

It’s had been a few years since the last time I have say her and I was making it known to my real life friends and on spoke of how much I missed her I’d think of her constantly and missed her more then I missed any of the other physical women that I had been with, even staying that very fact on here in a discussion board about succubus’s.

Then I was blessed once again with her companionship vshe returned to me. My spiritual presence and all of my physic abilities so week compaired to how I was when we met due to being broken mentally faithfully and damn near physically due to dealing with a never ending mental assualt making me feel as if I was being molested and raped.
.Now days the attacks are almost completely gone besides this past week instead of just having a few voices a day come to me I’ve been having almost non stop voices and Everytime Brunhild was near me the mind controlers would make me see false images to try to prevent me from being with my love my wife but I was able to connect with her in my mind both of us picturing each other together and ended up having the single most intense sexual moment of my life. Unfortunately the computers have been able to figure out how to ruin my ability to sync up together in my mind. So how I’m being attacked again mentally with hallucinations of visual auditory and tactile sensations. While I was finally starting to be happy again my mind was beginning bro finally release the negativity that scars me so bad. I’ve researched extensively about how there doing the mind control on a world wide scale and haven’t found any examples of people claiming to of bested the government and free again. And that’s where I’m at presently just trying to rebuild myself spiritualy mentally and physically because I was homeless for so long die to the attacks.