If anyone is opposed to angels, you might want to keep distance from me, as I’m building seals for a working. Hence, they’re near me.
I Also invoked the entire Celtic pantheon for protection and vengeance against enemies in Tuesday, which must have worked, as a table umbrella nearly decapitated me this morning, and would have if The wind was blowing the reverse direction.

It came one night i woke up then jerking off then I chould Feel something touch me/on top on me. But gonna try cleans Tomorrow if it works

I’ll search it … Hang on

@Mademeking speak this with authority

Scan for a scan anyone?

Nvm you got it

If its Lilith herself, you’ll need more than that.

@KingOfHearts616 @Fuego Is it okay im gonna try it Tomorrow cuz evryone home atm! Thanks alot. I Will update u as soon i try

Lion, the Deer and the Hare

you’ll need more than that

Btw that incantation undid an invocation of hades himself. So no nothing else would be needed.

I Also invoked the entire Celtic pantheon for protection and vengeance against enemies in Tuesday, which must have worked, as a table umbrella nearly decapitated me this morning, and would have if The wind was blowing the reverse direction.

Its powerful as fuck

He don’t like to be kept waiting. When I knew I had to contact him and was procrastinating, I started shitting blood. It stopped after contact had been made.

Couple days… I’m working towards it

Interesting. Because I have yet to contact him after that reading.

Whichever method you choose is fine here’s what I saw though,ready or not Fuego here goes: Initially there were a lot of blue, as what I’d like to call astral blue background, suddenly I could see you, you were emitting indigo flames from your feer blue as in the blue flame of a candle, except the beems radiating out from were tyhe typical shape associated with the sun: 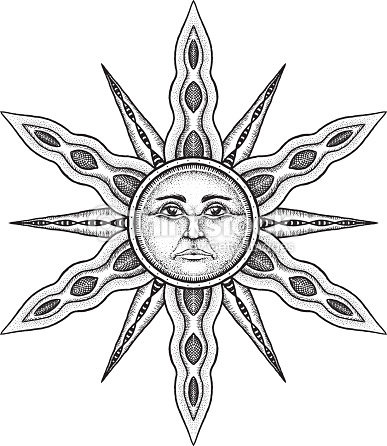 However the lines were not as curly the were all straight, around you there were dancing rings, a gyroscope, there were two rings surrounding you, one moving and spining diagnoally clockwise to the side and towards the viewer, the other one spinned counterclockwise and away from the viewer. Each of the two rings had alchemical symbols, the ring spinning counter clockwise had the planetary symbols, the other had the zodiac signs, inside this gyroscope it formed a sphere of powerful energy emitting from you expanding and contracting with a very intense bright light.

And behind you were a host of spirits, some femenine and some masculine, there were a lot of what I can only describe as angelic forces but also elemental. You seem to work a lot with the air elemental spirits. In any case you were walking and moving somehwere else, you seemed confused almost like you were looking for soemthing, a female spirit tried to reach out here hand seemingly trying to call on you, but you were seemingly busy finding something else.

Then mist appeared almost like it started from a small wisp and blossomed like a flower forming a glade, in that glade there was a verdant grassland, it’s almost emerald green, in addition to that there was a giant tree an oak, most likey, I am not an expert in trees which at this moment sucks, anyway, you walked towards it (the oak), and you start meditating underneath it, after a moment a golden ray of lights hit your head and illuminates your entire being and open yur eyes, you looked suprised and very happy, like that very moment is something you’ve been looking for, for a very long time.

Potential meaning and explaination of what I saw:

flames to me is always, change, intenseity, destruction or it could be wamrth and even protection. Since it’s emnating with an inidgo flame, these are astral flames or potential wards, that is used to keep unwanted astral visitors and attcks at bay, it also could reflect a personality trait, meaning you have a very strict set of boundries as in: “here but no further”. I get the feeling its both.

In regards to the meaning of the Gyrscope I think it’s a symbol of measurement or keeping track of the horizon even in misty times, so a tool of orientation of some sort, the direction and the meaning behind that is another matter which I don’t have a clue about, regarding the alchemical symbols that would be the forces and types of energy you surround yourself with, seemingly Goetic, angelic & elemental forces. The light in the gyroscope if your own spiritual power it seems.

Since the elemental force of air were very prominent in the background with all the spirits I’ll make the assumption you have an affinity for natural and elemental magick, esepcially with the air element however I cannot state that as a face or with absolute confidence.

The part where you looked for something is difficult to say, it could be a sense of loss fof direction or connection with angelic forces even, esepcially since an angelic force a woman were seemingly calling to you in this vision.

The last part about the glade, I can only interpret as enlighetened or awakening of your spiritual senses to a more intense degree, even a form of initiation, this seem to be a refernce to hinduism to Budha as he recieved enlightenment undernetah a tree, the tree itself the oak is symbol of endurance, strength and growth: http://www.whats-your-sign.com/celtic-meaning-oak-tree.html
Apparently, as said by levilevi below: “Oak is also symbolic of a God. Of many gods, as it were.”
I didn’t know this. What exactly that means though is a little beyond me, hopefully you’ll know how it relates to you.

So it would mean either get out into nature or allow yourself to grow, to trust yourself and your abillities and the spirits will show you the way.

The last paragraph I am skippy about though, but it does seem to coincide with the rest.

How right or wrong were I?

All the power to you

Oak is also symbolic of a God. Of many gods, as it were.