Possible signal from spirit during meditation?

Yesterday, I was in the process of an astral projection or a soul travel meditation, whatever term you want to use. The meditation was a failure, more like my failure but not the meditation itself, that is irrelevant. I saw a lot of things, at the end I saw a bright white light and that’s it, before that I was in the state where I was getting into the trance. At the end of that state, I was in very deep relaxation. It was so deep in fact that I could barely hear any outside noises and my breathing was low paced, out of fact (My breathing usually slows down a lot during the crossroads). Then in the darkness a symbol in colours out of this planet, I cannot describe them in any way. The symbol was floating in front of my eyes and disappeared after some minutes.

I do not think it was a hallucination due to the way it was formed and how… perfect it was. It appeared as if someone specially made it to contact me.

I remember it as well as I could, this is what I came to (I used blue for simplicity): 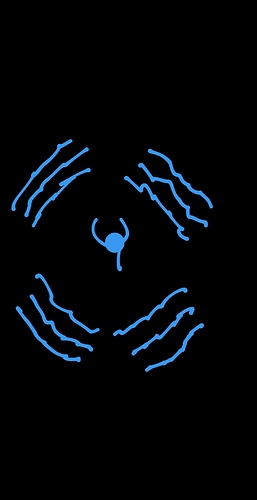 Does anyone have any idea of what it could be?

Thank you in advance.
/Daniel

I know I could just activate the sigil beforehand and try to see if it works. I just want to make sure what forces I work with.
/Daniel

Maybe you looked at your hands in the astral?

No… this symbol appeared to me before any of the transition stages, before the vibrations. It HAS to be a sign from some entity, or my imagination, not my astral body.

Looks similar to those old cave paintings of the sun.
I think it was from a YouTube documentary on the ancient sky and Saturn I saw that.

Sorry I can’t be more specific, long time ago.

Hmm, I think I may have a clearer picture. I worked with Lucifer but my responsibilities ended that work quickly. I have never contacted any other spirit.

From my knowledge Lucifer is the only LHP entity connected to the sun. Thank you!

Don’t quote me but going of my intuition, im sensing something to do with the 4 elements and mercury. So perhaps it a planetary or alchemical sigil.

I think Lucifer has something to do with this, I will contact contact him tomorrow or on Sunday. The sphere of influence on Monday is the moon but it is concerned with spirits. Sunday would make a better fit as it is in the sphere of the sun.

But if its mercurial energy tuesday would the best day to connect.

Yes, that is true, something tells me it is still the work of Lucifer.

I think he has a connection to the moon or Venus, idk. I will try on Tuesday.

Wednesday is Mercury day, as far as I know. Tuesday for Mars.

@chef1964
Sorry, it wasn’t my intention to copy/paste your post

All about days and some other useful stuff