Possible fae messing with me

I just wanted to share a few experiences here. Not sure if I’ve put this in the right place.

I think I have a connection with the fae. It goes back to childhood where I was very connected with trees. Since then, I had dreams and visions of them a few times and it seemed I saw the same beings - 3 of them but mostly I see one or two of them if they show up very rarely.

A couple of things of mine had gone missing. Two separate incidents. One was a ring I loved and I ended up buying a similar ring which was nowhere near the quality of the first ring. I had thoroughly looked for the ring at least half a dozen times. When I was disappointed with the new ring, my old ring showed up, right on top of where it should’ve been but was not there before.

The second was a set of tweezers. They were cheap but did the job (eyebrows in case you’re wondering). Then they went missing. I went out to get some new ones but they turned out to be useless. Next thing, I see the old tweezers sitting right on top of where I would keep them and they were not there before either!

This is something I believe that the fae can tend to do, borrow or move things around. It is fairly benign but a little annoying. I am not too bothered but wonder why they are up to mischief with me. Do they just want more attention? Maybe… any thoughts?

Re-read what you posted and see if you can see the theme they’re trying to convey cause I see it clear as day. Yeah, they are having a little fun BUT, they’re also teaching you something.

Okay, Donaldf973, not exactly sure what you are seeing. Is it old versus new? Is it being attached to certain objects? Please, enlighten me! Thanks for your reply

Definitely sounds like fae! They are michevious indeed. Things go missing with them all the time.

Common offerings for the fae are milk, cakes,cookies (since Santa is considered a fae this is why we leave him milk and cookies) and ofcourse shiny things (like that nice ring they took and probably also those tweezers) 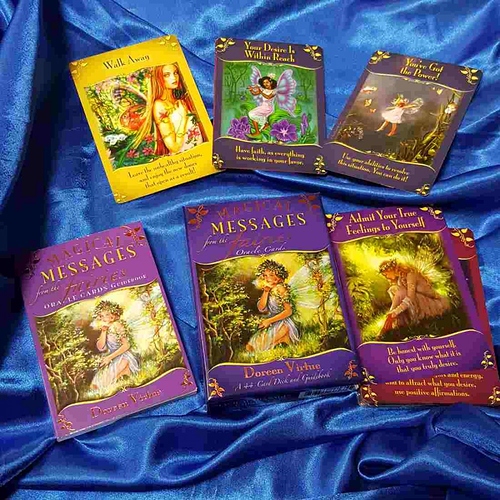 It’s a really beautiful card set. I last used it to help set up my spring time altar which I now need to swap out for summer

The visions are messages preceding the thefts that something has been placed against you and more is to come.

For some, fairies symbolize that someone is being mischievous, or you may be causing mischief in your own life or the life of someone else.

Symbols in the dream might help give you more insight into what the vision means. Take note of the setting of the dream, and the other objects of the dream.

The second item with small things disappearing and than reappearing are further warnings that someone who holds a grudge wishes to proceed with a base level hex.

Each deity of the Goetia uses symbols, the vision with three fairies, could be 3 deities are involved or the number 3, indicating the pagan trinity: Earth, Fire, Water, the symbols of three be they marks, scratches, or burns or something in a vision is an indicator of Bael (Lucifer).

I’m not sure about this, the dreams were years ago. The fae pinching things has been lately, however.

There are some other possible meanings, I think. One is the fae want more interaction from me. This could be something I’m meant to do. It could be they are reminding me of my recent dealings with the Morrigan, who is connected with them. It could be that She is telling me to work with the fae.

As for more to come, well, I guess things come in 3s! So, I suppose something else could go missing.

As for Bael - is he/she the same as Baal? I read he can make people and/or things invisible - he is associated with 3?

Thanks, I am not sure whether I want to do this or not. I wonder, as I replied to Lawclerk, if the fae are telling me to pay attention to them or if its something to do with the Morrigan, please see my reply to Lawclerk. Yeah, I’ve heard of offering things. Would you have a separate altar for the fae? Or where would you leave things for them? Thanks.

The number 3 and or symbols in 3’s could have several meanings depending on other events and symbols. Your prior visions from years past maybe unrelated to recent events. The interupatation is entirely up to you. I am just going by my past experience.

However, the Morrígan is often described as a trio of individuals, all sisters, called ‘the three Morrígna’ all these symbols combined could be another type of warning. All depending on what types of rituals you are conducting or perhaps in response to divination or ritual requests.

The Morrígan is mainly associated with war and fate, especially with foretelling doom, death or victory in battle or warfare. In this role she often appears as a black crow, and as the phantom queen she is seen as an omen of doom or perhaps mortal attack.

Yes Baal or Bael are the same deity. According to the Goetia he can make men invisible, this might be an indicator of his abilities in spiritual warfare to be able to shield and defend against attack.

Yes, I know a fair about about the Morrigna/Morrigan. She (Morrigan) is also associated with magic and sovereignty - can be self sovereignty. Also, yes 3 can be a number of her’s as can 6 or 9. Funnily, those numbers also tie in with (most likely) Luciferian spirits, I think?

In any case, not really sure how to see this. Could be anything. Could be a quickening even.

Perhaps do a divination about the best way to proceed and get more information?

Seems you have some uninvited guests, and I’d advise you either befriend or evict them.

You can summon them by singing to them, and offering candy or other sweets. Pay attention to your hair -itchiness in hair will be your first sign of manifestation. Ask them what they want, use your intuition and guardian spirits to determine if you’re being messed around with by pixies, or have genuinely helpful beings around, and proceed accordingly.

There are a lot of fairy tricksters, so be cautious and by no means dismiss them all as friendly, or weak. There are many fairies out there that are far stronger than many demons!

Sounds like some other manner of NPE to me. Fae in my experience dont bring shit they steal back, the little fuckers…

Pay attention to your hair -itchiness in hair will be your first sign of manifestation.

Why do say that the persons hair is a factor or that the entity will play with your hair or that your hair will start to itch?

Why is hair such an important factor in the manifestation?

With no offense to short haired, or bald people, hair is esoterically just another magical tool, and filter. Some cultures believed hair was where magical power was stored, as well as memories. Losing it was an act of shame. This is a half truth, in that yes, energies and powers can indeed be stored in hair, but it is not the only vessel for such. Hair can be a useful battery, a tool for mediation, transformation or storage of energy, power and information.

Different bodies respond differently to different energies, but in my personal experiences, and those I have taught, the fae begin to congregate, after a moment of silence, in the hair,manifesting as a minor itchiness, which is the first sign of their presence. Physiological responses to spiritual powers are a very useful way of doing magic, as is tactile visualization.

Thank you for that explanation makes sense. I have heard of the importance of hair before with magick in general but I often overlook it.

Is there any sigils for fae?

Wow, lots of responses, thanks!

I think divination would be a good idea. Also, I have heard of fae “borrowing” so I think its possible they could move something, hide it and possibly return it. Not sure, but I think so.

Now, as for the hair. That is something I’ve noticed, to the point when I visited my hairdresser, I asked her if I had dandruff or something as my head keeps itching. She told me no it could be minor eczema but I know about that and it is definitely not that. I think there is something in this fae connection!

I haven’t answered individually as I think (being sometimes slack) that I can sort of respond generally. Hope that’s okay.

Thanks for the tips!

Lastly, I’d like to know if there is a sigil for any fae also - perhaps one day I might learn…

Fae like sweets, roomplants and cleaned house just don’t clean so much as you probably do, you can put a spider to have a Web at a North window, it’s a Trick to buy no sweets, sugar… or eat them out this will make them loose interest very quickly. So another would be to take the roomplants out on the terasse. They wont return in most of cases

Thanks for that. I do have a house plant nearby where they seem to hang out. Also, we do have sweets, I have a 12 yo son who likes them

I don’t mind them, it was just a little disconcerting having things go missing

I did notice your reply in another thread (re: mini ritual and you suggested divination). Will have to have another look. Cheers.