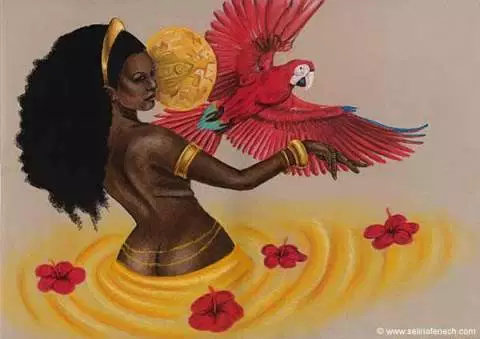 I contacted the loa today, or rather I’d say they contacted me. To be specific I contacted the loa Erzulie Freda. To everyone new who doesn’t know me because I haven’t actively posted in a while, I’ve been working with the vodun loa in all their forms and manifestations for a long time. I’m ancestrally related to Marie Laveau one of the most revered voodoo queens of New Orleans and much of what I know I learned from her and the loa themselves.

Last night I had a dream where Marie Laveau came to me and in that dream, I was to protect the house of the loa, in traditional Haitian vodun there are many houses. Many vodun houses are scattered over Haiti. It’s in these houses that those chosen to become Mambos and Houngans (vodun priestesses and priests) train and walk with the loa. I was in one such house and it was under attack, and it was my job to protect it using what I had learned.

Waking up from the dream I distinctly heard the words: “you know what to do.”

And I found that I did, I was facing many external influences in my mundane life that needed to be addressed and now I knew exactly how to address them.
So, I waited today on the hour of venus and I consecrated my altar with rum and called down my ancestors to drum in the astral for me. Drums in vodun are believed to hold power and one of the most significant drums is the asson for which I needed tonight due to its properties.

I began, and I could feel myself split and disassociate, one part of me was performing a ritual on the astral and the other on the physical, both in real time. On one hand my feet were firmly planted on carpeted floor and on the other my feet were bare, and bells jangled by my feet as my foot grazed the sand of the astral temple I always come to for my workings.

As a rule of thumb, in ritual what you do not have in the physical you can make up for in the astral.

I set out cornmeal and made a circle to which I anchored my astral temple to the physical by using incantations and my blood as a gateway to ground the astral in the physical. When you do this correctly, it feels like your real time perception is overlaid with something more, something other and It truly eels like you’re operating on both planes at once.

Once the ground was sacred I opened the ritual by calling on Papa Legba, I lit a cigar for him and had it burn slowly in an ash tray and in the smoke I could make out a smile almost letting me know that my offering was accepted. The smoke seemed to already make my darkened room impossibly darker and I could feel the curiosity of the loa pressing in. There were there like they always are, watching. But now I was aware. In Haitian vodun you do not call the loa from some far-off mysterious plane. They are already here, you just need to garner their attention.

I set the veve of Erzulie Freda on the ground and I activated through a technique known as “drawing with the three hands” I believe that’s what it’s called in EA’s book: The Spider and The Green Butterfly. After activating the veve an singing to Erzulie Freda in Haitian Creole I could begn to feel her presence permeate he room. I recited her chants as she taught me to and soon it no longer smelt like tobacco smoke but instead a sweet aroma began to permeate the air. A perfume that announced her presence well before anything else.

In the astral my partaking ancestors grew louder as she approached, and I could begin to feel tingles spread from my neck down to my lower back and my vision began to flash white. I was being ridden by Maitrezili (another name for Erzulie Freda). For me being ridden by the loa is more intense than just any mere possession. They seize control of your body in an unmistakable way. These aren’t spirits who don’t know what it feels like to be human. In fact, some of the loa pantheon have led human lives in the past.

After being ridden by Erzule Freda I performed the rest of the ritual which involved activating and energizing my root chakra, and I’m telling you, having the loa do this for you is one of the most amazing sensations you could ever feel. It also included the enchantment of two objects to the goal of which I desired. Both of which I am currently wearing, I will keep you all updated on the progress of the ritual in the next couple of days.

And I’m thinking of putting up a tutorial on how to enchant objects with power towards a specific purpose the vodun way i.e. by working with the loa. Leave a comment if you would be interested in that.

(quick add: I’m going to be posting and I’ll be here more often so don’t be afraid to leave a message for me if you have any questions as well)

What message do the loa have for us here on Balg? And, are they angry at E.A. like the Vodun priests are?

I would assume they may be angry at E.A but that is the feelings I got months ago. I am interested in working with Erzulie soon again, I have been contacted by a woman in my dreams for some time, and her name echoes to me

I would assume they may be angry at E.A but that is the feelings I got months ago.

Why would they be angry at him specifically, if you don’t mind me asking?