Well done. Made me miss working with them. Question for my curiosity.

With each one I pulled, tied and anchored the negative energy of the public’s perception and outrage about these crimes to the candle.

Was this as an offering to the shadow person or did it fuel a specific curse for each? A hybrid of the two?

I’d say a hybrid of the two.

Fueling the curse, and adding an Xtra flavor for the shadows.

And hopefully, a way of helping to alleviate and heal the people that are effected (but doubtful, but worth a shot).

Something I forgot to mention was I cut open a mini portal under the candles to act as a bit of a vortex or something to add some extra pull.

helping to alleviate and heal the people

I feel that. If nothing else, they have to generate it anew and will get some relief.

“But…it’s not yours to give” [female voice]

That was said with an impression that was less of a admonishment, but more of a rhetorical rebuttal. Devil’s advocate kind of statement.

My response: *“I am not here to give, because I mean to take”

I felt something of a masculine presence behind me react with approval. “GOOD” (felt like this came with a very confident nod, and a feeling like “yes, you’re getting it!”)

Last night I did the sphere rite for Thagirion, and the other additions (beelzebuth, sorath).

It’s tempting to throw Lucifer’s energy into the mix as well, but doesn’t quite or really feel necessary…we’ll see.

I didn’t have enough room on the altar after setting up all the curse candles, so I just stuck to the chants.

As before, I drew up a page with the seal of Belphegor, the seal of Thagiriin, the seal of it’s associated “hell”, and this time the Briahic Hendecagram, with Belphegor’s angle key at the appropriate point. All superimposed over each other.

As well as Sorath.

As I didn’t have space, I skipped making the black taper candle last night with appropriate sigils as I’ve been doing.

With Arab Zaraq, Baaltzelmoth was more adamant about being called after midnight.

Now that I’m on the next sphere I look forward to being able to conduct these things at an earlier time and get back to a more normal schedule of sleep.

With amusement, I noted that the remainder of the Arab Zaraq candle was finished right above one of his sigils.

I recently purchased two decks of cards. One is a new better rider Waite tarot I hope to use for reading for others or at least is more satisfying to have. It’s got foil and stuff, very spiffy.

The other is a waterproof pack of playing cards in a color scheme of red and black as well as silver with roses. I picked this one out as to me it looks a lot like something that would evoke Pomba Hora to mind in “Quimbanda colors”.

I ran both decks through Palo Santo incense smoke to cleanse them.

I then washed each deck in portions of each suit in a wash of wormwood, mugwort, and rue to simultaneously further cleanse and charge/consecrate them.

There was also a small addition of Anise (for Pomba Gira).

I was prompted to place them under some crystals in my crystal collection and to leave them there for a week. I’m assuming the interested/relevant spirits will add their own thing to the mix as they sit. 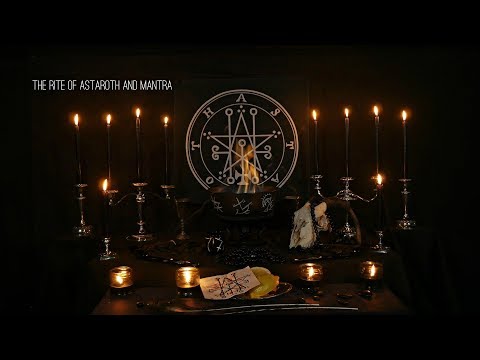 When appropriate, I’ll call on Astaroth presumably to consecrate the tarot cards. 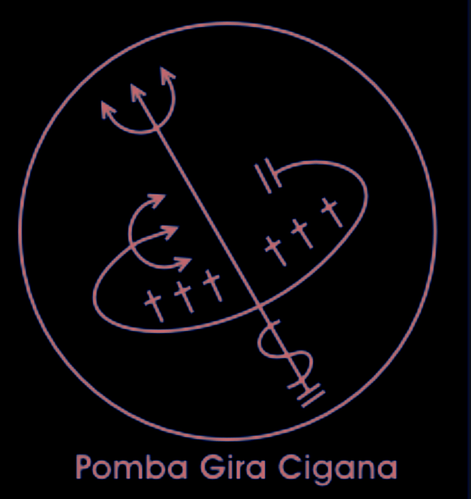 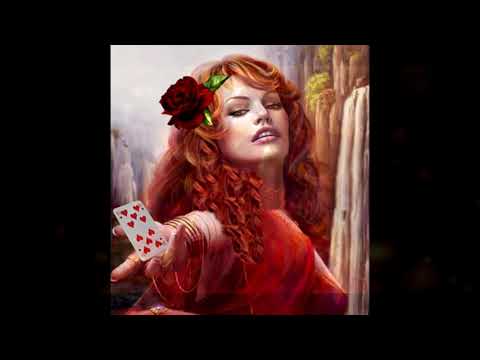 (Sidenote: I actually don’t like a lot of the sung pontos as I find the style of music sort of annoying. Lol it is what it is, this one however, does appeal to me with it’s Spanish flair)

And for the playing cards, I’ll call on Pomba gira [cigana].

I prefer to play it close to the chest, but I was recently hit with a sort of deep understanding that I need to make a rather big move in the future, sooner rather than later…somehow.

It’s possible, that if I manage this move I’ll be in a better position to find or work with some real quimbandeiros…

Something was made apparent to me towards the end with Arab Zaraq, was that in using the stone from the cemetery and keeping it on the altar for 13 days that in some way I don’t entirely understand, it will create an elevation of any or some of the spirits tied to the place it came from (if they are receptive/willing)…(this would be a “service” to said deceased)

As well as functioning as a sort of nexion for the connected spirits of the current(s) of the sigil(s) and prayers it was being used with. (And an item that can be used to call on dead spirits tied to the currents, presumably)

I don’t have a clear grasp of these things, as it’s a very intuitive sort of gnosis.

Last night something occured to, some gnosis…

Embarrassing as that is, upon review I can make better sense of what was being communicated I think.

You might divide the 21 paths before the fool into 3 groupings representative of these “coronations”.

Tau, would be the beginning of the first set of seven. Tau being the

[cross-crossroads] and the mark of exile as the path of nod is undertaken.

More than that, I don’t think I’m allowed to say.

Ah, yes…here we are at last. The solstice is upon us. The gate of nihilifer [Beelzebuth]…

Today needs to be very solar oriented, and lines up with my current path with Thagirion.

As the summer solstice occurs in the sign of Cancer, it would make sense to incorporate that as well. 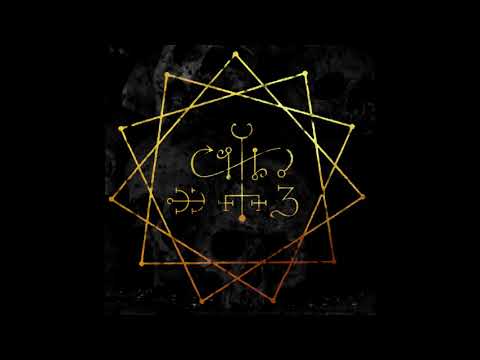 Furthermore, the sun is most exalted in the sign of Aries… 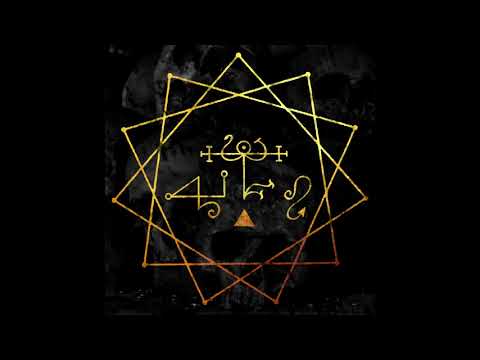 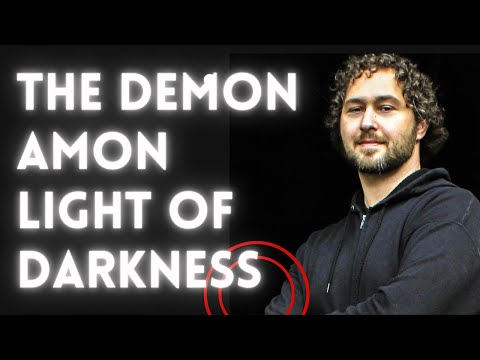 I’ve actually had a recent disagreement with this spirit.

I was looking to do a petition for some one I recently met, and Amin’s name was brought to mind. I drew out the sigil and wrote up the request.

But then I felt like something was off. The impression I got was that the wording was wrong somehow, or disagreeable to the desired result. Tbh, my senses were kinda shit while I was trying to decipher what was trying to be communicated, but what I was getting wasn’t favorable, or seemed antagonistic. I called the petition null and void and tore it apart. Said thanks for nothing and went about my day. I think it was more an issue on my end but, also…that I haven’t called on Amon before.

Before that, I wanted to call on Malphas (defense) for this same person, but he wasn’t up for it, as I probably won’t see this person for quite some time, and as malphas lore is that he’s a bit of a trickster and should be payed after results, well …I wouldn’t have a way of confirming.

Understandable. So, Vine stepped in instead.

I still need to call on King Paimon, and Marba’s has made it clear to me that I need to call on him for myself soon if I want him to be doing anything for others (interesting…)

I’m currently engaged in reading The book of Thoth here and there. It’s confirming a lot of what I’ve been putting together myself I’d say…

On another note, I was perusing a book earlier today that I find interesting. “black magic evocation of the Shem ha mephorash” 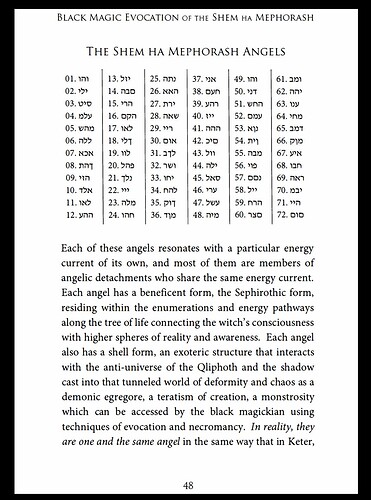 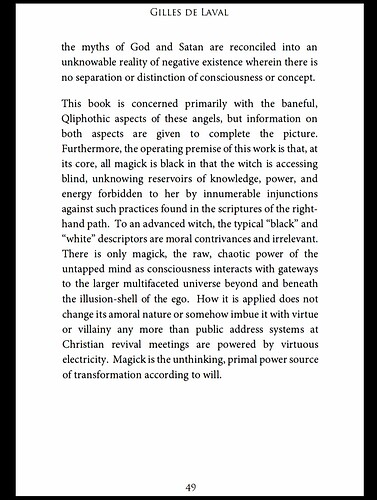 I had a pleasant visit with a lady Sunday night that I almost avoided, but one of my guides or a spirit around me encouraged. I’m glad they did.

She was rather receptive to me right off the bat, and I ended up staying longer than I might’ve otherwise. (Beleth?)

Whether she was aware of it or not, her hands seemed to gravitate to my Lilith pendant at one point.

(While ruminating on this later that night, I think I might’ve been told something to the effect of her being a daughter of Lilith in some way…)

I gotta be honest, I’ve been lagging…lacking…slacking, with Thagirion.

Right now the candle burns, and it will burn down.

This morning it was brought to my attention that Asmodeus is around, in the wings as it were…

Next sphere would be Golachab which I’ll probably be starting soon.

And Golachab will likely be a continuance and progression of the various rageful and and aggressive energies I’ve been feeling with Thagirion.

Last night I had an odd dream where I was interacting with a group of women who all seemed to be “girlfriends” to some capacity or other. (Harem? Lol)

Interestingly they all were costumes, and I remember a nun and a nurse being in the mix.

I was on pretty good terms with all of them.

I kinda feel like this dream might be related to Beleth, but don’t rightly know for sure…

If the “1” of the magician is the emergent divinity or source from the nothingness and emptiness of “0” [the fool] then the “2” of the priestess must be the feminine divine in the highest aspects guarding the secrets and veil of the abyss and the supernal triad.

The letter of the strength is teth…the serpent.

If you look at teth, it is like the orobouros that has not yet but it’s tail…the great leviathan of the primordial chaos…

In Shaktism I believe, there’s a notion of Shakti’s rousing of Shiva to bring forth creation.

Because on its own, the logos would remain in a state of emptiness…or something to that effect.

Further, there’s the symbolism of the lion and the sun. The sun being a symbol of the “light of divinity” and the soul in many instances.

The lion headed serpent variously attributed to Yaldabaoth and/or Samael…

Looked at from another angle, Crowley’s seven headed beast of Babylon could also be the seven hells of the qliphoth ridden by Lilith/Naamah… 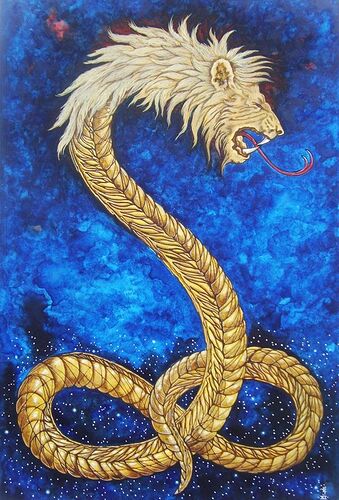 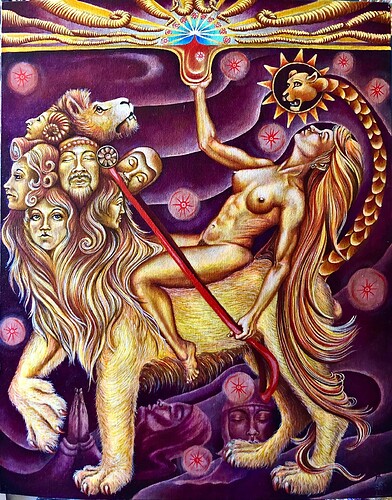 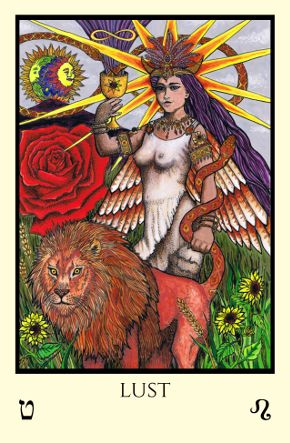 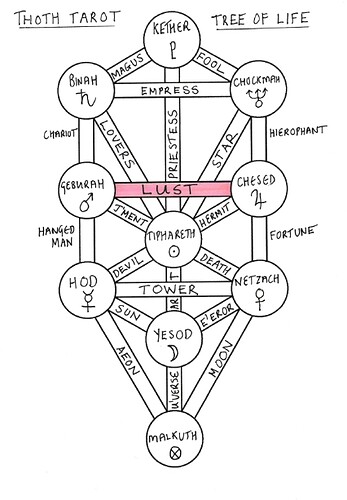 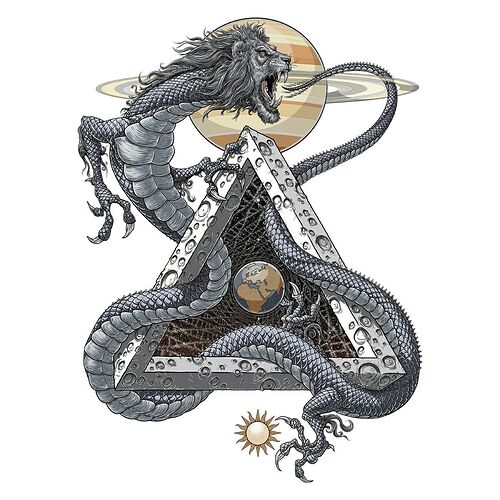 Recently the djed pillar of Osiris was part of something I did.

As it happens, the older form of the letter samekh could be taken as a djed pillar… 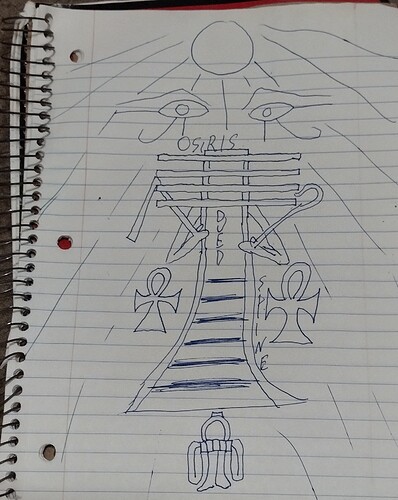 With samekh we have a few surprises. The shape of the letter has evolved quite radically and although it is roughly circular in modern script, in the first temple era it consisted of three horizont…

Something I did the other day… 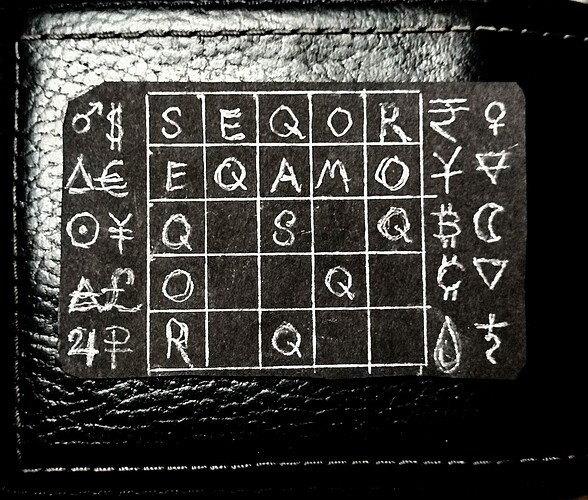 Cardstock cut in the shape and size of a debit/credit card.

Symbols for, dollars, yuan, yen, rupees, rubles, pounds, euros, Bitcoin, the crypto symbol, and a drop for oil/gas. (There is indeed a bit of reasoning behind the types of money)

Around these, playing double duty, you have symbols for planets/metals.

Also, the symbols of the elements.

I went out to a park the other day and found a quiet space to activate this square in the woods.

Went about my business.

On the way home I passed an American Express thing they use in restaurants when they take your order or something.

There was some brief note with abbreviations and a date.

Amusingly, the last two letters were my initials reversed…

Don’t know what to make of all that. We will see I guess…