Past life and essence of my spirit (investigation)

So I have already written in my previous threads about researching my past life. But now I would like to ask for advice and help in determining the nature of my own spirit. Now I have a lot of information, but I cannot combine it into a clear and logical chain. I will present the following information in the form of a table to make it more convenient:

What accompanies the manifestation of these images during meditation (at the level of sensations): the smell of mountain herbs, the ringing of a bell, heat in the body.

Pictures associated with these images that appear during meditation: mountains, forests, a waterfall and an abandoned or empty temple. Sometimes an image of an underground temple with columns appears, where some woman (apparently a priestess) burns herbs and I inhale the smoke from them in the form of either a dragon or an androgyne.

Other information that I found out in the process of researching past life:

During sleep, I can communicate with demons in their language;

Attakeria was the keeper of the gates between the worlds and performed something like priestly functions, communicated with various Forces;

Demons do not like the image of the dragon, the connection with them is then interrupted or a conflict occurs;

Sorry for repeating, I don’t want to bother anyone, but images from a past life have become an important part of this life. Therefore, I want to find out their meaning for me. Well, I will repeat myself with the image. This is how I look approximately during meditations. 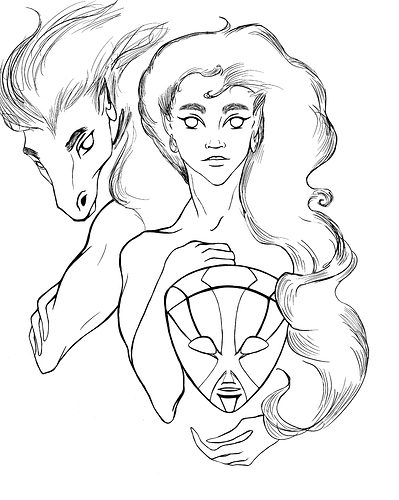 @Velenos, maybe you can tell me what it looks like or what you can compare my situation with? I remember you gave me information about Buddhism. But I also found information on gatekeepers in Hinduism, Chinese mythology and Shinto.

I want to understand who the gatekeeper is and why in, let’s say, I try on these images described above. Maybe you have met such creatures and transformations in your practice and can tell me in which direction to explore this past life.

The fact of the matter is that I want to understand this myself. This is what King Paimon told me about it literally: “Guardian, protector of the gates that the seers see.” I learned nothing more. There is only this information and some scraps of past life memories that I described above.

have you divined it yet?

Not. I found out about this back in mid-July and since then I have been trying to find any information. What I have written is essentially a direct speech by King Paimon, if you can call it that.

As I continue to explore my identity and past life, I decided to turn to King Paimon again. He has already helped me in explaining the episodes of my past life. Yesterday I asked him: “Who am I? Tell me please". And today an image came to my mind, which I embodied in a drawing. While drawing, I felt cold near my right hand, as if someone was next to me. Perhaps it was King Paimon, who thus decided to answer my question. 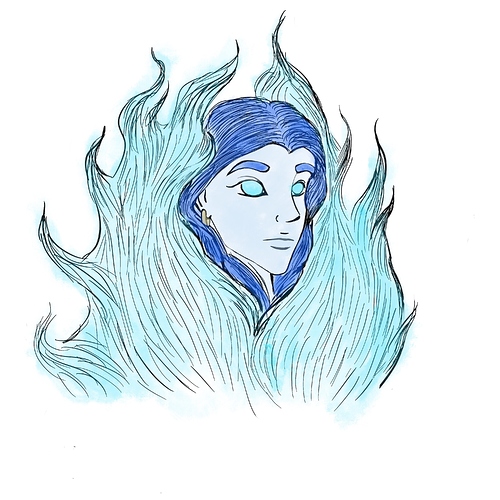 This is great, the path to discovering who you were and what your soul is can be a amazing journey

Yes, this is very interesting and unusual. And I feel that this is only the beginning of the path to myself.

I’m excited for you lol.

It’s amazing! Today I experienced a flashback related to my past life. I wrote that sometimes in my meditations an image of an elderly woman in a temple appears with a steaming bowl in her hands. So today it happened again, but now the words that explain this image came to my mind: “She does this in order to open the entrance.” Apparently this is directly related to my life, where I was the guardian of the gates, and she, thus, asks for help me open these gates. But where?
For a long time I was unable to portray this, but now, finally, I have a rough image of what appears to me in meditations. 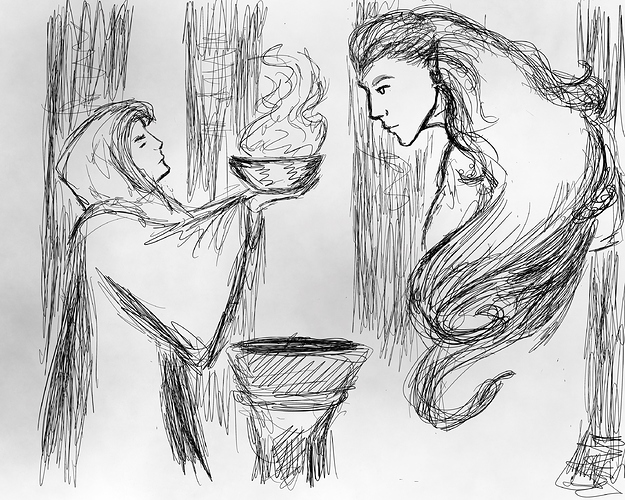 Today I would like to pay special attention to another important image in my meditations - the image of the dragon. I can turn into it either arbitrarily or when I repeat Ignis draco. I don’t know why it works, but when I become this being I feel some kind of ancient strength, energy and joy, but I cannot bear it for a long time. It’s like you are given a large dose of adrenaline and you literally light up like a torch.

But I noticed that when this transformation occurs, the connection with the demons is interrupted. As if all the channels that were previously developed in the process of communicating with them are turned off. Moreover, the lower demonic forms may be afraid of this creature. This happened several times in dreams, when again I involuntarily turned into a dragon.

It seems to me that this is some kind of protective form of the soul, giving both strength and energy. But I still cannot understand how to use this resource and what possibilities it conceals in itself. It reminds me of the concept of the dragon in the East. Because they are both protectors and guardians at the same time, which, by the way, may also be related to my past life as a gatekeeper.

Well, traditionally I attach a drawing of this image. He is depicted in the mountains, as is often the case in meditations. If I am in this image, about ninety percent I see mountains, snowy peaks, a cave and sometimes endless, high forests around me. 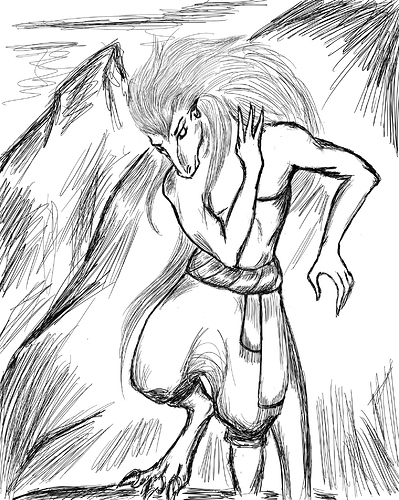 The most interesting thing is that two more feelings are associated with the image of the dragon - fatigue and loneliness. When I am in this image, such thoughts come as: “Leave me all alone, I want to be alone.” Moreover, as far as I understand, this refers to contacts with demons - Astaroth and King Paimon. I did not try to establish contacts with demons anymore, except that I saw Orobas several times - once in a dream and several times during meditations. So Astaroth does not like this dragon, because once in a dream a conflict occurred between them. King Paimon so far only observes and expresses something like “Childish, obstinate antics” about the dragon image.

Yesterday, during meditation, I tried to recognize the symbols that sometimes appear on me in all three images - androgyne, dragon and pillar of flame. They are always bright, sparkling (almost radiant, white) and most likely have a protective function. It was very difficult to draw them and, perhaps, some of them are irregular in shape. But here is a small part of the symbols that I was able to recreate after meditation (I could not understand more, because I was tired and started to have a headache). 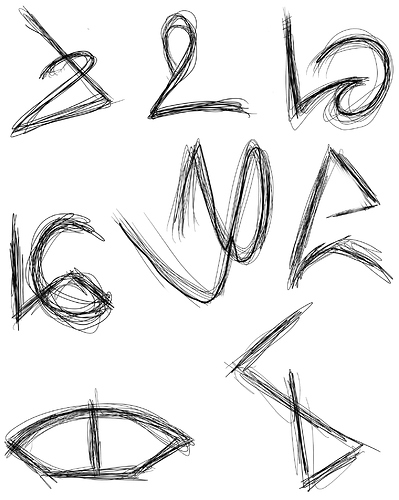 Perhaps the symbols are associated with the Fiery World, and the one who shows them to him is just an inhabitant of this world?

Did this spirit or creature call itself something? Did they explain the meaning of these symbols?

Alternatively, these can be symbols of the gatekeepers. Their protective symbols. These signs are the legacy of my past life (as well as images of dragon, androgyne and pillar of fire) , where I was the gatekeepers and therefore it is all the more interesting for me to know their appearance in other situations in order to understand both them and my nature. But I cannot say that I was then somehow connected with the Nephilims.

But if these symbols were shown by Enki, then their origin may be associated with Sumer.

And one more important point that I forgot to mention. It seems the same symbols I saw in the underground temple on the columns, which sometimes appears in my meditations. What kind of temple is this - I do not know. But there the keepers of the gates were called to open the entrance. I don’t know where either.

So this is an image of the gatekeeper as interpreted by King Paimon. I asked him to help me draw this creature or person and this quick sketch came out. In the process of drawing, I again clearly felt the feeling of deep antiquity and that in my past life I “missed somewhere” (these words clearly came to my mind). But I did not learn more. I got the impression that something is not letting me go further, that there is some obstacle preventing me from learning more about my past life and soul. 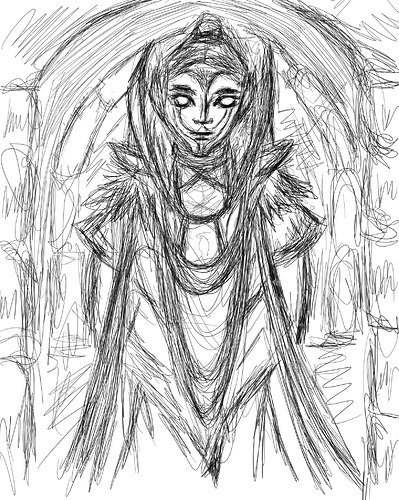