Hi guys, well I’m well pissed off, been off work for two days, haven’t eaten in two days. I’ve had this fucking norovirus and now I’ve found the energy to get out of bed thought I’d cure my boredom and share this weird experience with you.

It all started at 11:?? on Tuesday. I was in work and I felt a hand touch my left arm from behind, making it a little bit numb and couple of seconds later touch my right arm with the same effect. As if something was trying to hug me from behind in a very creepy way. I thought nothing of it at the time, as I often have paranormal experiences as I’m sure we all do.

Cut to 1pm. All of a sudden, out of nowhere, I start feeling awful. Headache, nausea, etc. So I go for nap hoping I will feel better when I wake.

3.30pm Wake up, puke everywhere lol and it continued every 30 minutes ad nauseam until around 5pm Wednesday (yesterday).

Now, the weird thing is that during that night of hell lol I called out to the aether to reveal to me what was making me ill and keeping me ill and this is what i saw (please forgive my shitty drawing). Creepy to say the least, but I believe this is the consciousness of the norovirus.

It felt VERY powerful and I literally had to fight with everything I had, for hours.

I prevailed in the end obviously

Has anyone had any similar experiences?

PS. Its a lot easier to get into the TG sync when you’re ill and have a fever, so next time make the most of your bad day. 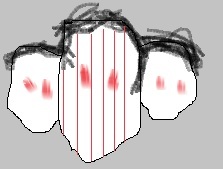 So wait this is an entity that is referred to as a virus? I was talking to someone in an astral environment recently when suddenly this dude who looked like the guy from the movie goonies bursts through the wall and tries to attack me. He was subdued by one of my guardians but they referred to him as a virus.

Its an actual virus/flu which is ravaging Britain at the moment but I strongly feel that there is an entity/consciousness to this virus. I apologise if my post is hard to understand, I’m still a little delusional lol

[quote=“Seeker, post:3, topic:772”]Its an actual virus/flu which is ravaging Britain at the moment but I strongly feel that there is an entity/consciousness to this virus. I apologise if my post is hard to understand, I’m still a little delusional lol

No it was the disfigured guy, Sloth. Corey Feldman played one of the kids. But this is interesting, I think on some level everything has a conciousness, so maybe that was it.

I would suggest a few things…

@defectron
Hmmm, thats strange because as soon as I was well enough to get out of bed, I looked up The Goonies on wikipedia just out of boredom. Is there something to this? I dunno, its a helluva coincidence at the least.

Yeah I performed all these cleansings as soon as I had the energy, but thanks for the advice anyway

Concerning work, I work in retail with a 90+ herd of zombies surrounding me all day so I doubt it’s somebody I work with, but stranger things have happened I guess. Theres only probably 4 or 5 people out of those 90 that I would consider non-hostile towards me so…

What else, if anything are you doing to correct the situation ?

[quote=“Seeker, post:3, topic:772”]Its an actual virus/flu which is ravaging Britain at the moment but I strongly feel that there is an entity/consciousness to this virus. I apologise if my post is hard to understand, I’m still a little delusional lol

Dude Pennsylvania is getting smashed with that shit also. My mother in law was in the hospital and they would not let us visit it was so bad, I think 41 kids died in the states from it. I was sick for two weeks over Christmas with that bullshit, on the couch with a fever soaked and freezing ahhgh makes me sick just thinking about it. Hope you feel better.

@Zukara: What else would you suggest? I’m back to full health now.

Sorry for the delay…Local time flys by quickly.
Anyway, you seem fine now; but did you ever sleuth the reason this happened ?

Going further with the clean bed linen idea… Robert Bruce says magnetic underlays works wonders against entities that try to get you while sleeping. he said a child who was suffering continual nightly attack saw some kind of entity trying to get her and it disappeared when it went over the magnets. Not sure if that entity was super powerful or a parasite type.

Nope never did find out why