This is the only way I could get a pic without being too obvious. Can someone scan us, my uncle’s in the background. What do you get from me and what of him?

I’m about to dump my home made bottle of war water that a Mexican shaman asked me “NEVER bring that shit in my store again” on his bed and floor. I’m seriously contemplating sealing his crown chakra permanently. The situation is that serious. 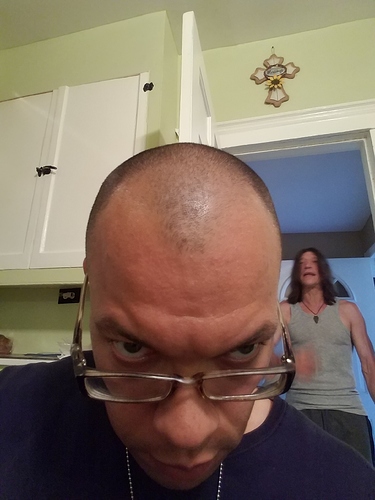 Do divination. It looks more like the need to get rid of him, instead of actually something hardcore!

You need cleansed. Light a candle if you have one, let me lend you some juice. Have him make the shape of a triangle over your back with his hands. While your in that position take a couple deep breaths, relax, get comfortable. Now both of you focus on the word Zokar, vibrate that while saying it literally or mentally. That opens your chakras. Now, focus on my icon image. Keep chanting and focus for 3 minutes. Let this energy help you. Please do as I’ve instructed.

Well, yeah he’s a mess, but that cross has something wrong with it. I suggest cleansing it as well.

I wanted to say that, but they could take offense to it and ignore what was truly intended, hopefully he’ll realize what you’ve said. I helped them, that house is another story lol. Anyone out there wanna send some vibes, they need em.

Me and him are clashing hardcore spiritually especially with him praying for me after me asking the Jesus freak to stop. It’s not for simple good shit like good life path, good health, succubus blow jobs, etc. It’s shit like “Please god remove him from this path of devil worship and sinful ways. Remove his ability to cast spells and worship these heathens and force him to the Christian path, the right path, the only path that is true. DO NOT allow him to have mercy or peace until this path is his only path.”

When walked into my grandmother’s the other day I almost kicked his door in and beat his ass to a pulp with said door. About 2 months ago I literally did an entire cleansing of their house and him because he was going crazy. Something was literally attacking him awake or asleep in every aspect of his life and I figured out due to his situation his shadow self and it’s pissed. So, I threw him a bone and did it but flat out told him we do it my way i never was JCI and never will be. My way or no way and he HAPPILY agreed. So, I wiped the entire place inside and out energetically including him and warded it with JCI symbols and charged the shit so I knew they would work and left the bible prayer shit for him to finish. Afterwards, we put together a plan to work on his dark side to alleviate the situation and told him I put in a fail-safe that if he doesn’t do what he has to do for himself this will all backfire. This asshole not even 3-4 days later is running around “fuck the heathens and their devil magic kill them all don’t give mercy to any of them for believing in anything but you oh mighty lord.”…ARE…YOU…Fuckin…KIDDING ME​:angry:

Failsafe kicked in and he started getting attacked again so much so that it’s gettingto the point his reality is startingto mix with his thoughts. Oh well he can clean up his own mess. But, when this dude prays and I’m included in it I’m getting attacked even when I’m not in the house and I’ve explained this and he won’t fuckin listen. He raises enough energy the electronics in their house are getting fucked with. It’s because his prayer is a fuckin random irratic chaotic mess. One second it’s protect children and puppies, then, crack open all volcanoes to burn non believers in holy fire. Then, show mercy and love and compassion followed by drown the earth with tidal waves and tsunamis to kill everything against god…its a fucking mess when he opens his mouth and he does this every day from the time he wakes up until he sleeps. Hell, this fucker is probably carrying the prayers into his dreams he’s such a god damn mess upstairs.

He’s literally a walking, talking irratic chaotic mess and spiritually unleashing that shit on purpose. When he starts praying the cats haul ass away from the house and don’t come back until he stops. As soon as he starts back up they run away again.

Sorry you’re having to deal with that. Research Reiki and heal him, prove to him it’s different that what we’re taught.

He’s beyond helping. I’ve spent months trying to get him to understand the only difference between us is I don’t slave myself and worship something I work with them and me helping him should’ve been proof enough that spirituality is good or bad depending how you use it. I even broke down JCI, polytheism, working with spirits and how it’s all magic including JCI. Everything used other than prayer in all religion is props and tools, the bible a grimoire, the prayer is incantation and the shit that comes from it is belief manifested through spirits helping.

Idiot understood it for all of 10 minutes, went into his room, got pissed at the truth and went ape shit praising god and kill all the devil worshippers and nonbelievers

I showed him reiki style shit by eminating energy almost a foot away from my hands from meditation and he was like “wtf?” And I explained to him how do you think the monks did their shit- meditation. Less than a week later no more energy hands. It was that asshole and his fuckin prayers. It’s amazing how much shit is caused by some fuckheads blatant stupidity

Damn. Well since your attuned, ask the angels to help convey the message your sending. Keep putting into it everday. Keep up with this, even though you going through this bs.