For context I asked Belial why Lucifer sent me to him. In return I got this vision. “I got a image of a distant man walking twords me. He had a black cloak over his head that attached to a very long cape, that covered most of his torso and legs. He approached me, and unvieled his hood. It was me. But darker. I was wearing dark eye shadow and liner. My face was matured, and I felt the power of myself. The knowledge he held was bleeding through the image. Then the vision focus on his eyes. They were no longer a pupil and iris. It was a 8 sides star. He than left laughing, taking a left and out of frame.”

I spent the day search what that star meant. And finally found it in a YouTube video explaining random symbols. The video had a eye emoji on it and everything. I knew then that this is it. 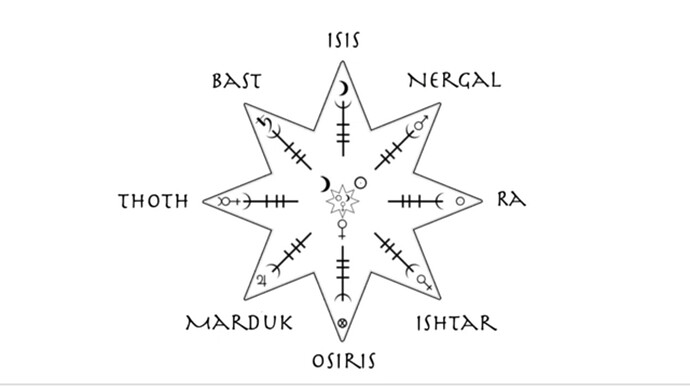 What do these spirits have in common? Are they a pantheon?

Any individual experiences with these spirits?

Any other information regarding the vison?

There is almost no information from the web, but I know it’s called the star of the 8 gods.

Four pairs for sure:

But why these four pairs in particular I wonder…

Your guess is as good as mine. And the even bigger question. What connection does Belial have to Egyptian gods? I get the feeling of a pathworking ahead of me.

Stars are often representations of the sun. But student cultures have used this symbol through the ages:

Search “8 pointed star history” and a bunch of links will come up.

They’re from different pantheons, Egyptuan and Sumerian. I can’t think of a reason why the author would mix them up, this seems a modern interpretation of the 8 pointed star

Any individual experiences with these spirits?

I work with Nergal paired with Ereshkigal, and Thoth as his Greek version, Hermes. Not together, Nergal is a god of pestikence and war, but also protection and healing, and Hermes I work with for success in communication and business.

Re: the vision work, I would say what I always do on such things including dreams, the vision is your subconsious trying to communicate ideas to you, so the symbolism is highly personal to you. My interpretation of what it would mean if I had that vision, would probably be wrong for you. Meditation on it is a god exercise towards knowing yourself better.

I will read into the link. I did a short meditation and couldn’t focus too well. I’m about the get some water and try again. I feeling a stronger and stronger pull into this selection of spirits as I research. I think it’s similar to the gatekeepers. Where you have to open the demonic gates of hell starting with Belial. The thing is, where do I start? What point of the star represents a begining or end? My instinct says start with the top. But on the other hand I feel like starting with the sun symbol is better because the sun is a star.

I invoked Belial to ask for further insight. What I got was not what I expected at all. I replayed the vision, and instead of it replaying I communed with myself… It was… neat. I asked some basic stuff about the future as you would if you talked to your future self, and alot of the answers he wouldn’t answer. Or I wouldn’t answer? Idk if I should use he or I lol. But what i do know is that this is the right direction. And while writing this I totally forgot to ask where I should have started. So I got a bit more insight on the situation at hand.

I was about to say I have no answer to what the connection between Belial and Egyptian spirits was, but I think I just solved the question. Me. Maybe this whole talking to me is some sort of divination Belial can do. I’m absolutely confused and just spit balling.

According to the reverse image search, it seems to be a “Star of Ishtar” from Al Manning’s “The Magic of New Ishtar Power”.

What’s weird is that there’s no description of the book’s contents. However, what little information I could gleam was from the reviews. I guess it’s a magic system revolving around Ishtar that tackles multiple facets of life (ex. money, love etc.).

See what I mean? The information is hard to find. I’ll look into the link. I’m going to do a heck of a lot of research and call these spirits. I’ll definitely do a journal for the public to learn about as I go. Unless the spirits say otherwise.

Maybe because it’s called the star of Ishtar I need to start with Ishtar? I guess we will see

That’s as good a place as any.

What are the chances Ishtar and Belial have some history? So. Much. Research.

Well not sure how true this is, (totally upg here), but from what I gathered a few times Belial and Satan are brothers of a sort. So if this is true in it self and Satan (to me and a few others) is Enki, that could mean that Belial is either his brother or half brother. And if this is true that would explain Ishtar because Lilith (to me and some out there) is Ishtar.

If this is the case it would make sense about her star showing up in your dreams. The star is also suppose to represent the morning star or Venus. Soooooo

The whole related-to-who system is always complicated. Just imagine if someone who has never practiced magic before just read your post. They’d be so lost lol.

explain Ishtar because Lilith (to me and some out there) is Ishtar.

I also read this a few times. I’ve never worked with strong sexual energy’s before. I’m aware that they have other powerful aspects, but for those spirits it stick out more. No pun implied.

well the whole reason I said UPG. Plus it’s all on individual base. Some may have experiences before even dabbling or even just after starting that would confuse them because it didn’t follow the “norm” from what some had said. (cough cough my experience) Plus let me add any one that is asking about certain gods and spirits from a experience they had even just starting out and it didn’t go in a ABC order per say, I’d say it be good to have those food for thought posts lol.

In regards to the sexual energy I get it. They do to a lot of people. I suppose it’s just how they come to you in general.

Then again when I first started I had huge hits of sexual energy from just working with the Goetia so I suppose I just got use to it.

When I started I worked with the goetia too. It was a lot of fun for me. Expiring all the diffent spirits.

And I get what you mean, alot of what we do isn’t very common. I think I’ve decided that Ishtar is the spirit to start with. I just what direction do I move in the star? Im guessing that a question that will be answered down the path

I feel you will be guided by her with it. I have found that many roads open up and we are led to the entrance of these roads with bread crumbs per say. Once we discovered this we can make a decision rather or not to take the path working.

Some times it’s like the qliphoth where you go in different places to gain those aspects and sometimes it’s a whole path it self that you could do as deep soul transformation work such as the path of the black sun or the path of the dragon.

With these other smaller branches may pop up example soul transformation into X (ex succubus, vampier) or working with black flame and integrating it into your being and thus your energy and magic. This has the same with the other side of the spectrum with the light such as the violet flame and angelic soul transformation.

One thing that did pop into my head just now is your accent. Perhaps that is like a path working in it self gear to that. I mean you did say that is your future version that you met or felt like it was. Kinda reminds me a bit of Hekate and her labyrinth a bit. So in that retrospect kinda is like the qliphoth if your viewing it as what the picture above is.

In the qliphoth there is “guides” that basically drag your butt through these places that tear you apart but in the process rebuild you. Some have names of that person or someone that is kin to them ex Lilith in the Qliphoth but it’s Naamah that is the “guide”. So definitely food for thought on that one.

It’s very possible this could drag my ass through a rebuid experience. I’ve just never worked with any of these spirits or gods. Should be fun. I already know I won’t be saying that again in the next year.

I’m gonna make a whole journal in it. Probably titled “The Star Of Ishtar Pathworking”. I’d be lying if I would say I’m not nervous. Just think of the spirit that gave me the task. BELIAL. No one getting into hell without passing through his first gate. I must have passed something, and now he’s probably gonna sit back and watch as I go through it. I don’t know when to start though. I’m going to go over all this information with Belial and see how that goes.

I also realized if I’m going through it clockwise. I end on Ra the sun god. You know who else is all about the sun? Lucifer… The spirit that started this path

LMAO!!! Definitely dragging you through some good old soul build up

Well that explains a lot. And honestly that be fascinating to read that journal. I have worked with most of those gods before. They are…deep to say the least. Many faces on them. So you’ll uncover some aspects that you may or may not know of your self and especially them.

And I was just thinking that to. Reasons why I brought up the qliphoth. It reminds me of it and each arm is like a path to that realm. I was also looking up some on Marduk and Nergal and to say it’s interesting Marduk is the son of Enki and Nergal is the son of Enlil. On top of that Nergal is all about well destruction but could see it as a rebuilder. That is definitely going to be fun for you. So in a way it’s the qliphoth but a different more compact version of it.

Belial deff be putting you to boot camp if we are right about this one. Also if my hypothesis is right once your done you’ll probably wound up back to him also look at the middle. Deff soul alchemy.

But hey definitely will be a fascinating experience for you!