my concept is of a will,that Is outside of actual existence,either in what we understand as the afterlife,the spiritual,or the material realm. and yet is so unfathomably intense in willpower,that its very intent can completely obliterate natural law in any of those realms. allowing it to warp space in any of those realms to create it’s own actualized existence through postulated exploitation of quantum effects like the uncertainty principle,and the nature of mathematic infinity.

while perhaps my approach integrating more modern concepts into the thoughtform is novel,my third eye tells me the concept itself,that of a will willing itself to exist,is infact not novel,and someone else has already created the same thoughtform. i would like assistance in tracking down this thoughtform so that i might be able to draw upon it for my work.

tl;dr version who nailed this one before i did and what did they call it

I think I would call that the tao.

im aware of that. but what im talking about specifically implys an individual will whereas the tao is alot more of a universal concept.

the reason why im saying its seperate from “the bulk” is from a concept relevant to the thoughtform,that the true bulk is far too far above anything related to our reality,to even be conceivable in a mortal mind

ill try putting it another way

there is a saying “nothing unreal exists” so likewise,that means that “whatever is real exists”. now the idea of something being real is that simply its an objective truth,or that its known in some way by an observer

now the concept of nothingness,obliteration,or the like therefor must exist,as its possible for observers such as us humans to conceive of it

ergo,non-existence can exist.obltieration is simply another underlying state of reality

similar in principle to “everything is equal to nothing,and nothing is equal to everything”. see,this conceptual exercise starts moving your mind more towards conception of the impossible,which is a “bread and butter” sort of thing for my path

Well, the tao is both, because it is all things. Everything is an aspect of the tao. Not that that’s much use in most everyday situations.

there is a saying “nothing unreal exists” so likewise,that means that “whatever is real exists”… the idea of something being real is that simply its an objective truth,or that its known in some way by an observer

Meaning, “nothing that is not objective truth exists”? What qualifies as an observer, given the entire universe can see itself? There is nothing unknown that cannot become known.

I also think most of it is highly subjective. That’s because the observer is also a creator being.

So, what if the saying is unreal? It doesn’t sound like an “objective truth” to me… but… Thoughts are real, aren’t they? Yet, are they objective, are they truth, since they go unobserved quite a lot?

now the concept of nothingness,obliteration,or the like therefor must exist,as its possible for observers such as us humans to conceive of it

Is there not a difference between the concept and the observation of a thing that fits the concept?
That old, 'the finger pointing at the moon is not the moon" chestnut?
The Tao that can be named is not the Tao. As soon as a thing has a name, it exists, if only in the esoteric.

Nothingness exists, but once a thing has existed, it cannot be lost. Some call this the Akashic Records.

This sounds more akin to the Old Ones… Do you read Lovecraft at all?
If this is the case, the way to contact it is through Yog Sothoth.

well it all boils down to our definition of “real”

im asserting that “real” means anything that has any kind of existence,even so much as a whisper or a word or a thought

and that being the case,because nothing can be imagined,thought of,described (however poorly). it therefore must exist

the true bulk. tao,infinity,apeiron, and so forth,this is not that. this is an altogether lower concept,but high enough above our betwixt reality that its intent,much like the power of human intent yet on a far grander scale, can warp space actual to create itself

just think about it for a moment. imagine the often popular conception of the dissolution of self or the ego. then imagine the exact opposite of that,taken to an extreme so grand it warps reality

Ok, I use the same definition of “real” myself and I like that better. You had defined real as “objective truth” (your words) which didn’t make sense to me.

imagine the often popular conception of the dissolution of self or the ego. then imagine the exact opposite of that,taken to an extreme so grand it warps reality

And you want to know what it’s called?

I think that’s the tao. With a little T. The one that comes from the Tao that cannot be named.
Nothing else is big enough.

apparently what im saying isnt making all that much sense. its similar to a boltzmann brain (you can google that),except with the caveat that something outside of existence used it’s intent to create the thing.

imagine the causality of this as an infinite inverted ziggurat,where each layer represents a larger and more powerfull will (spirit if you like) where the one below it is directly caused by the one above it. go up and you eventually reach the tao.go to the bottom and you reach the person. we are speaking of the layer just above the person 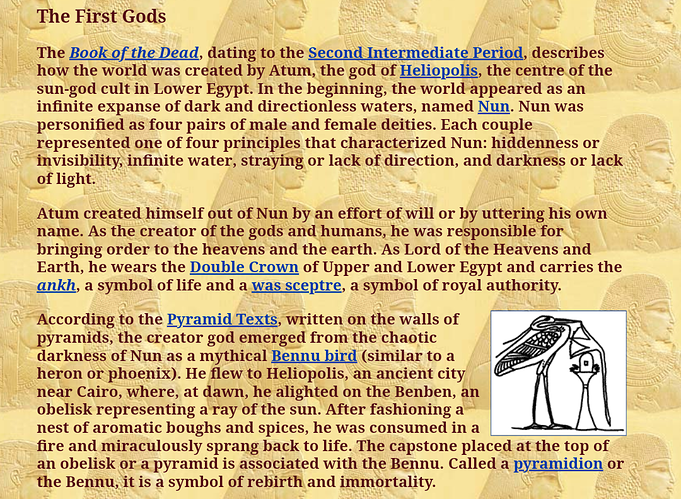 "Atum created himself out of nun, by an effort of will or by uttering his own name…"

well arent you the talented one.

so now we have some of the earlier traces of the concept’s origination. again well done