I was adopted by my Catholic step mother since i was a baby in Queen Victoria Hospital in Adelaide, the hospital is not there anymore i am the youngest in the family and i got a 2 year older brother

hes reat pig headed, and real authority to he is adopted as well and he works in the building industry as a design manager $100,000 to $200,000 PA salary and because he is a real pig headed arshole thats the type of position arswipes like him get, because when he looks down at me because i am on a Disability support pention $900 a fortnight, and practice the darkside he sees shit, and if i look up and see the position he is in i only see my 2 year older brother as an arshole, he think he is better than me, i go over sees around the world, able to pay off 4 houses because of that colossal size Mount Everest salary he is on,

now i thought there was something very fishie about him, Mum prefers him than me because of his colossal size mount Everest salary he is on, i don’t know how he can fit his awfully big head though the big front doors,

back in may 2017 our friend of the family Collin Earl passed away so i had to attend his Funeral at mums church an hour of torture yes they are built on cruelty i hear people in the church pray and saying as a pray Happy are those who are abused, tell me how can someone be Happy being abused,

after that crape standing outside my two year older brother giving my mother a punch in the guts infront of everyone demanding, her to sign her estate over to him my older brother so i get nothing after mum and dads funeral,

my older brother put my old man in a home, he has got a bit of Dementia hes 90 this year, apparently i have a clear enough instinct, that my mother succeeded, signed everything over to my older brother the whole estate, there not very well off any way, not walking million airs, so they wanting to stab me in the back,

so i discover a website Lilith treasure tavern, and discover Reverse adoption meaning dumping my Catholic Mum, Dad and older brother greedy guts pig, and i purchase for $92 Australian dollars reverse adoption so a entity on the darkest end to adopt me in the blackest arts,

so i did i payed for it, when i did i had to make everything is right for my companion, so i payed, i keep it dark say nothing to family,

on Thursday support day coffee with mum at Michael patisserie at Westfield Marion, mum turned up 20mins latter mum tells me we are not related anymore you are not my son anymore and your older brother Sean is fucked off he can’t do anything to you anymore, because he is not you brother anymore, Dad is not you Dad anymore, visit him Sunday he tell you the sam, which i did

Dad is not related anymore hes fucked, so i succeeded dumping the Catholic family through reverse adoption at Lilith treasure tavern,

any way mum left everything to Sean any way now hes fucked, hes hasn’t got me to torment anymore im free, another thing, older brother got top job, now i found a avenue for me to has a highly payed job, you know there is a game engine called Unreal engine 4 free download, so i showed mum infront of Anglicare support worker

mum say know to me because she knows i could make a fortune mum don’t like me making a fortune so im doing it behind her back, she don’t know im building a desktop pc then download Unreal engine 4,

i had me going out of my mind learning blue print node tree so i can start getting a concept, it is still going to take some Unreal engine 4 tutorial i been watching learning a new skill and i will get it.

Sure english aint my main language so my spelling and writting is not the best but i hope ppl can understand mostly what i would like to write but my reading skills in english is way better. This text however m8 i can hardly keep up with what you try to pass through here.
Let me know if i have boiled it down correctly.
Envy for older brother, hatred for family which according to you aint your family anymore but you still seems to refere to them as your family. Some idea to earn money using Unreal engine.

I dont know you, my only knowledge about you is from your post on this forum and they all seems full with grand ideas in your own mind.
From my point of view you seems to harbor a great deal of anger towards your family and you seems to wanna be be free from them.
Why dont you cut the cord completly with them so they dont act as a bump in the road for you on your journey in life?
Out of curiosity what is it you wanna do with the Unreal engine?
If you wanna get rich making game then you have a lot of work to do and if you havent got any education on the subject it can be hard. If you want succes in the game world then i would point you towards games on cellphones as the prime target, pc games takes way to muck work and demands a fairly high degree of skill and not seldom a team of ppl working on it.

So you wanna make games for the latest gen of consoll?
As i said earlier i hope you are not alone then seeing as big developer put tons of ppl on projects like that and it mat take years to make a game.
If you wanna make it possible to make a figure of any demon to play in a game i dont think using ur method will be the best.
Trutfully i cant say i have seen any convincing photo of demon or goda in physical form so by that i think your plans might be hard, but If you are succesfull i congratulate you.
It will peobobly be easier thou to evoce said demon and make drawings and use those to make 3D modell in maya or Zbrush

I could use a thought form.

For modeling sure, for photographs im not sure(

So Your not sure about Photogrametry, i found something hear you go.

Hear is another one, i watch and learned,and i find very interesting.

I think i understand what it does but your idea is to capture a demon on photo? And according to earlier systemet i guess 36 photos from different angles?
I cant bring to mind ever having seen a photo of a god, demon or angel so im bot convinced it can be done.

I put some paragraph breaks in, remember there’s a laptop or desktop out there awaiting the call from you and your lovely welfare, think of it as an investment Ausbros in the the reduction of people driven crazy by his posts!

I work out how to get asset of skeleton warriors, using Photogrametry, install Agisoft on your computer, get a turntable, mark out 36 marks 10 degree apart, then next get a camera DSLR, on a tripod with a large 300 watt stroab light set behind camera, connect a cord to camera used to take picture, take a picture of turntable, the get a full human skeleton put it standing on the turntable, take a picture turn turntable 10 degree take another shot turn turntable 10 degree do it 36 times download 36 photo to Agisoft for clean up, when taking photo have a 25% overlap. Also might help to taking arial shots at different angles so all together 45 camera shots reason why arial shots is if don’t you will see a hole in top of skull in Agisoft photo program.

So your plan is to make assets for others or make your own game?
If make game it sounds like a fairly expensive process to get the assets and it would probobly be faster, easier and in the end cheaper to download free assets from developer or buy packs.
One Google search away i found some skeletons for you(; 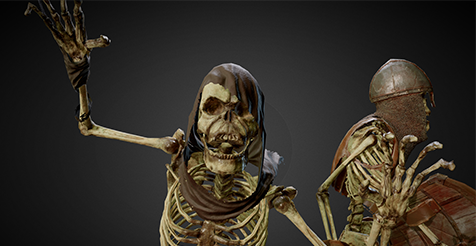 The package contains three game-ready undead skeletons: a naked skeleton, a mage and a warrior with sword and shield.

Question again then.
Are you planing on making games or packs for others to buy?
And is your intention to take photos of a demon king to make your model?

I found another way without summoning one, i found out i can use Blender 2.79, also to create games for next gen consults it would probably take a decade, i have to consider the shear magnitude of a game, i give it a go cannot expect miracles, i have to go solo.

Was a couple of years since i was working with said programs but yes there are great tutorials out.
If you wanna make games i would recommend taking some classes on the subject, normal gamemaker education can be 2-3 years in lengt so some education might come in handy.
I see you have grand expectation but to be completly honest i think you aim to high.
You want a photorealistic game yes?
How are you ganna be able to do that on your own?
You should start simple and try make something that will make money and lets you make a company and Gore ppl then go after the bog game you wanna make.
Look at games like; Angry birds, minecraft, candy crush and so on, simple games that become great succeses, and even a game like candycrush probobly takes a team of 5-10 proffessional gamemakers months to make.
Follow the KISS rule from SAS ”Keep it simple stupid”.